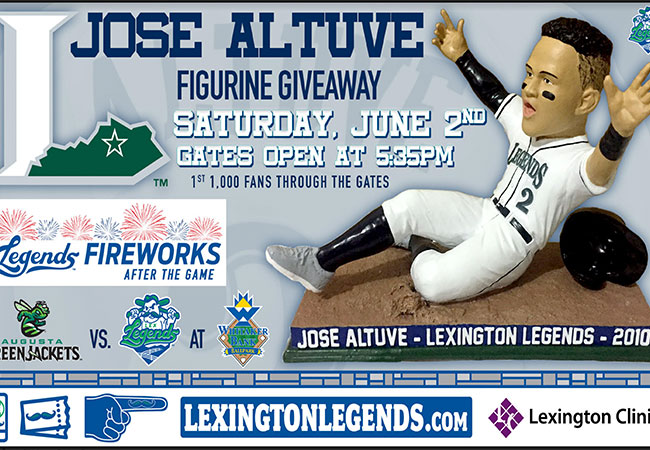 WHITAKER BANK BALLPARK (Lexington, KY) – The Lexington Legends will be back in action on May 29 to kick off a seven game home stand featuring the West Virginia Power then the Augusta Greenjackets. The Legends will pay homage to one of the most successful former Legends, and now World Series Champion, Jose Altuve while also welcoming the Ben-Gals of the Cincinnati Bengals.

“During the course of this homestand, fans will be able to take in a variety of experiences. We are excited to create an NFL-esque atmosphere with the Ben-Gals on Friday night and then honor one of the most talented former Legends to play at Whitaker Bank Ballpark: Jose Altuve. Fans of all ages are sure to enjoy these next seven days in Lexington!” said Legends President/CEO, Andy Shea.

Tuesday, May 29 at 7:05 p.m. vs. West Virginia: The Power is back in town which can mean one thing: The Hatfield and McCoy rivalry is renewed. The two foes will don special jerseys as they take the field for the opening game of the series. It is also $0.25 Eisenburg Hot Dogs all night long!

Wednesday, May 30 at 2:05 p.m. vs. West Virginia: What’s better than a baseball game in the afternoon? Take in the sunshine and a game on Winning Wednesday. If the Legends win, every fan in attendance will receive a free ticket to the next Wednesday game upon exit. It is also the continuation of Hatfield and McCoy night against the Power!

Thursday, May 31 at 7:05 p.m. vs. West Virginia: What’s in a name? Fans will have the opportunity to drunk on Michael Jordan, talk baseball with Ty Cobb and so much more. They may not be the celebrities that made their name famous, but that’s a small detail we are just going to overlook. It is also Thirsty Thursday courtesy of Kentucky Ale and Pepsi. Enjoy $1 12 oz. beers and $3 16 oz. beers at the Bullpen Patio, First Base Pavilion Tent, and the Handlebar in the first base concourse. $1 Pepsi products will be available in the 1st base and 3rd base concession stands.  Fans can also bring their best friend, of the K9 variety, for Bark in the Park with a $2 donation to Scott County Humane Society.

Friday, June 1 at 7:05 p.m. vs. Augusta: The Ben-Gals, the cheerleading and dance team for the NFL's Cincinnati Bengals, will appear before and during the Legends game against the Augusta GreenJackets. The Ben-Gals will have a pre-game autograph session from 6:00-6:45 p.m. and they will have calendars available for $10 each. There will be a total of four performances before the game and between innings. Another autograph session will be scheduled during the seventh inning of the game at a location to be announced. All autograph sessions will be open for all fans. The Legends are also hosting Friday Night Live, featuring a live musician performing on the Bullpen Patio on the first base side of Whitaker Bank Ballpark, before and during the game. Following the final out, fans will be able to join postgame fireworks!

Saturday, June 2 at 6:35 p.m. vs. Augusta: The Legends will honor former second baseman Jose Altuve with his very own Throwback Figurine Giveaway on Saturday, June 2. The first 1,000 fans will receive the figurine when they enter through the gates of Whitaker Bank Ballpark at 5:35pm. Jose Altuve played in Lexington, KY the entire 2010 season where he was named the starting second baseman on the 2010 South Atlantic League Southern Division All-Star Team, and also named to the 2010 SAL Postseason All-Star Team as the second baseman.  After gaining a promotion to Advanced-A with Lancaster to begin the 2011 season, he would again be promoted to Double-A Corpus Christi and on July 19, 2011, the Houston Astros called him up to make his MLB debut. After the conclusion of the 2017 season, the World Series Champion and former Legends player is now a 5x MLB All-Star, AL MVP, Gold Glove winner, AL Hank Aaron Award recipient, 4x Silver Slugger, 3x AL Batting Champion and 2x AL Stolen Base Leader. The game is sponsored by Lexington Clinic and stick around after the game for another fireworks show!

Sunday, June 3 at 2:05 p.m. vs. Augusta: Be sure to sing your do-re-mi’s before you head out to Whitaker Bank Ballpark as the Legends will be hosting a stadium wide karaoke throughout the game with classics such as “Sweet Caroline” and more! It is also Free Ticket Sunday thanks to JiF, so all children 12 and under will receive a free box seat.