Lexington Legends Double Up West Virginia in First of Three 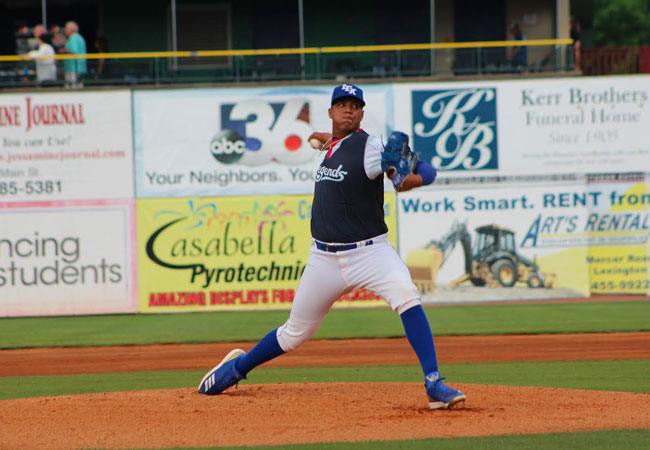 The Lexington Legends were back in action at Whitaker Bank Ballpark in the first of a seven-game homestand. The Legends took game one over the West Virginia Power, 12-6. Lexington now improves to 27-22 on the season while West Virginia falls to 25-23.

The Power were the first to strike in the top of the second inning. Brett Pope led off with a double down the right field line. Chris Sharpe reached when he was hit-by-pitch, putting runners on first and second. Pope then scored on an RBI single up the middle by Ben Bengston, and Sharpe scored the second run of the inning on an RBI single by Lolo Sanchez. The Power led 2-0.

In the bottom of the second inning, Seuly Matias blasted a 422 ft. home run, his 14th of the season over the centerfield wall, and the Legends were on the board, 2-1.

The Legends continued scoring in the third inning. Ricky Aracena reached base on an error by the shortstop then Travis Jones launched his third home run of the season to left field, and Lexington led 3-2.

In the bottom of the fourth, Brewer Hicklen and Marten Gasparini led off with back-to-back singles. Cristian Perez then reached base on another error by the Power, allowing Hicklen to score. Aracena then grounded out to the second baseman, and Gasparini scored. Perez scored the final run of the inning on a groundout by Jones, and the Legends extended their lead, 6-2.

The Power would come back to tie it in the top of the fifth. Lolo Sanchez hit a solo homerun then Oneil Cruz laced a single to centerfield. With Rodolfo Castro at the plate, Lexington’s MJ Melendez threw a ball to the first baseman, Nick Pratto, which went over his head, allowing Cruz to advance to third. The pitcher, Carlos Hernandez, then threw a wild pitch, and Cruz scored. Castro then lined a single to left field and scored on an RBI double by Cal Mitchell. With Mitchell at second, Brett Pope brought him home with a single, and the ball game was tied at six runs each.

The Legends would answer with six runs in the next two innings. In the bottom of the sixth, Hicklen lined a double to left field then scored on an RBI single by Perez. Aracena was hit by a pitch to put two runners on base for Lexington. Jones brought home Perez, and Aracena scored on a fielder’s choice hit by Melendez. After the sixth, the Legends were back on top, 9-6.

In the bottom of the seventh, Matias lined a double up the middle and Gasparini reached on an error by West Virginia, which also allowed Matias to score. With Gasparini at second, Perez smacked an RBI double to left field, bringing home Gasparini. Perez scored the final run of the game on a double by Aracena, and the Legends held onto the 12-6 lead.