Logan Woodside to Throw Out First Pitch At Legends Game 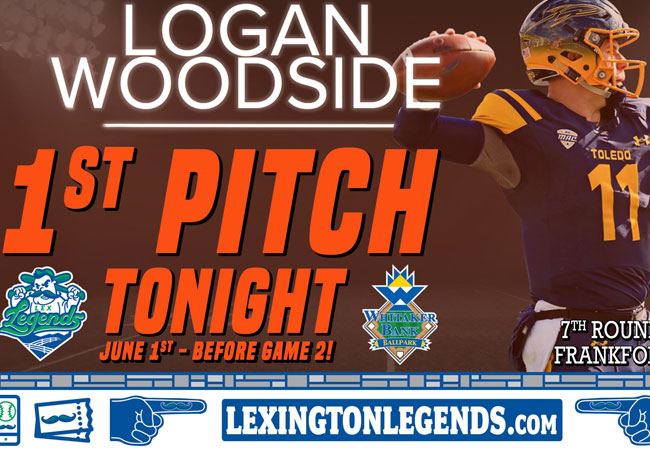 The Lexington Legends are excited to announce that Logan Woodside will be throwing out the first pitch tonight before the second game of the doubleheader between the Legends and Augusta GreenJackets. The first game of the doubleheader will begin at 5:35 p.m. Woodside, a Kentucky-native, attended Franklin County High School before attending the University of Toledo. He was recently selected by the Cincinnati Bengals in the seventh round of the 2018 NFL Draft at AT&T Stadium in Arlington, Texas.
"We are always excited to recognize homegrown talent from the Bluegrass. Logan is a very hardworking young man that not only excels on the football field, but in the community as well. We can't wait to have him at Whitaker Bank Ballpark tonight and look forward to watching him have a successful career in the NFL," said Legends President/CEO, Andy Shea.
At the University of Toledo, he holds the career record for passing yards (10,514), touchdowns (93) and passing efficiency (162.87). He is also tied for fourth in completion percentage (65.1%). Woodside ranks fifth all-time in MAC history with 93 TD passes and finished his career 12th all-time in FBS history in career passing efficiency. In 2017, Woodside was named MAC Offensive Player of the Year and earned the Vern Smith Leadership Award (MAC MVP). He was also named Offensive Player of the Game for his performance in Toledo’s 45-28 victory over Akron in the MAC Championship Game on December 2, 2017.
At Franklin County High School, Woodside completed 138-of-212 passes for 2,951 yards, setting a school-record 41 touchdowns as a senior. He led his school to a 12-1 record, advancing to the third round of state playoffs and earned first-team all-state honors from MaxPreps. Woodside rushed for 428 yards and nine touchdowns while adding 65.5 tackles, five interceptions and 13 pass breakups on defense. He was also named Offensive MVP for Team Kentucky in the Best of the Bluegrass All-Star game.
The Ben-Gals, the cheerleading and dance team for the NFL's Cincinnati Bengals, will appear before and during tonight's Legends game against the GreenJackets. The Ben-Gals will have a pre-game autograph session and they will have calendars available for $10 each. There will be a total of four performances before the games and between innings. Another autograph session will be scheduled during the seventh inning of the game at a location to be announced. All autograph sessions will be open for all fans. The Legends are also hosting Friday Night Live, featuring a live musician performing on the Bullpen Patio on the first base side of Whitaker Bank Ballpark, before and during the games. Following the final out, fans will be able to take in postgame fireworks.
The Legends, a Class A affiliate of the Kansas City Royals and member of the South Atlantic League, play all home games at Whitaker Bank Ballpark in Lexington, Kentucky. For ticket information, call (859) 422-7867 or visit LexingtonLegends.com.