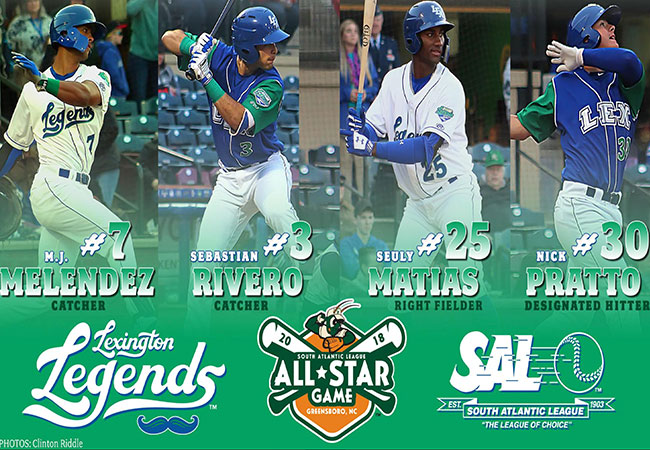 WHITAKER BANK BALLPARK (Lexington, KY) – The Legends are excited to announce today that Seuly Matias, Sebastian Rivero, Nick Pratto and MJ Melendez have been named to the South Atlantic All-Star Team for 2018. The 2018 South Atlantic League All-Star Game is scheduled to be played on June 19, 2018, at First National Bank Field in Greensboro, North Carolina, home of the Greensboro Grasshoppers. The full release and complete rosters is below.

"We are very proud to see four Legends be recognized for all their hard work so far this season. They have been leaders on the field and have also been involved in a variety of capacities in the community. We are so excited to see these young men excel on the field, and beyond the diamond as well,” said Legends President/CEO Andy Shea.

Seuly Matias has been stellar at the plate, leading the SAL in home runs for the majority of the season. Currently, Matias is batting .247 with 17 home runs, seven doubles, one triple and 34 RBI. His 17 home runs, currently leads all levels of Minor League Baseball. He started the season off with a bang, blasting four home runs in the first three games and recorded a six-game hit streak from 4/05-09 where he went 8-for-19 with one triple, eight RBI and four homers. He had a five-game hit streak from 4/16-25 when he went 8-for-20 with two doubles and home runs in back-to-back games. He has picked up speed again smashing five home runs in five games 5/27-6/02.

MJ Melendez has alternated behind the plate all season with fellow Lexington catcher, Sebastian Rivero. Melendez had a four-game hit streak 4/17-21 going 4-for-16 with two home runs and four RBI. He was named South Atlantic League Player of the Week for the week of 5/14-20 after having a stellar seven days at the plate. During that time, he went 10-for-24 batting .472/.462/1.042 with a double, triple, four home runs, eight RBI and scored six runs. Melendez had another six-game hit streak from 5/20-25 going 9-for-25 with one home run, four doubles and six RBI. Currently, Melendez is batting .263 with 11 doubles, five triples, eight home runs and 29 RBI this season.

Nick Pratto has been the every day first baseman for the Legends, appearing in 49 games. Pratto hit the ground running in his first year with a full-season team, with a six-game hit streak from 4/19-25. He went 12-for-23 with two doubles, one home run and five RBI. From 5/09-514 he recorded another six-game hit streak with one double, two home runs and five RBI. Pratto is currently batting .264 with 10 doubles, seven home runs and 27 RBI.

Sebastian Rivero has been a very valuable backstop for the Legends, as well as productive at the plate. Rivero recorded his first four-game hit streak of the season from 4/18-25 going 9-for-15 with two home runs, six RBI and four runs scored. He had an eight-game hit streak from 5/05-5/14 going 13-for-31 with three doubles, home run, three RBI and six runs.

CLEARWATER, FL—Eric Krupa, president of the South Atlantic League, has announced the rosters for the 59th Annual SAL All-Star Game, scheduled to be played on June 19, 2018, at First National Bank Field in Greensboro, North Carolina, home of the Greensboro Grasshoppers.

Greensboro manager Todd Pratt will skipper the Northern Division All-Stars for the first time.  Pratt is in his second season in the league.  Pratt will be assisted by Hagerstown’s Patrick Anderson, Kannapolis’ Justin Jirschele and Greensboro pitching coach Mark DiFelice.  Handling the athletic trainer's duties for the Northern Division will be Greensboro’s Eric Reigelsberger.  Greensboro’s Brady Fitzgerald will serve as the strength and conditioning coach for both teams.

Greenville skipper Iggy Suarez will manage the Southern Division squad.  Suarez is in his first season managing in the league and in his third season as a manager.  The other coaches for the Southern Division will be announced later this week.  Greenville’s Phil Millan will serve as the team's athletic trainer.

Both all-star teams will be represented by 25 players, selected by the votes of the team’s managers and coaching staffs, local media and front office executives.  First National Bank Field will be hosting its second SAL All-Star Game.  The first time was 2008, when the Northern Division beat the Southern Division 13-4 in a game that featured Madison Bumgarner, Freddie Freeman and Jason Heyward.  The annual SAL All-Star Game dates to 1960, when the All-Stars defeated the Salisbury club, 6-2, in Newton, NC.

"Once again, we look forward to enjoying a game that showcases the incredible talent in this league," said Krupa.  “Greensboro Grasshoppers President/GM Donald Moore and the entire staff in Greensboro have been working for more than a year to put together one of the most anticipated events on our baseball calendar.”

A variety of events have been scheduled in Greensboro in conjunction with the 59th SAL All-Star Game.  The 2018 SAL Hall of Fame inductions will take place as part of the All-Star Luncheon, sponsored by the Greensboro Sports Council, which will be held at The Terrace at the Greensboro Coliseum Complex on Tuesday June 19 with doors opening at 11:00 am.

A limited number of tickets are available and can be purchased directly from the Greensboro Grasshoppers by calling Mary DeFriest at (336) 268-2879. Tickets are $30.00 per person or $300.00 for tables of 10 guests.  Gates open at 4:00 pm on Tuesday, June 19th at First National Bank Field for FanFest and autographs.  A Home Run Derby is scheduled to start at 5:15 pm and the 59th Annual South Atlantic League All-Star Game at First National Bank Field is scheduled to begin at 7:05 pm.  More information can be found at www.gsohoppers.com.