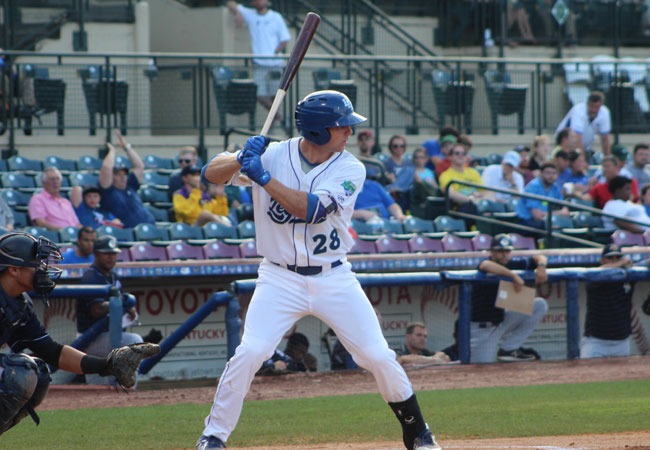 The Lexington Legends welcomed in the Charleston RiverDogs for the first game of the second half of the season, but due to inclement weather, the game was shortened to eight innings with the RiverDogs on top, 9-8. The RiverDogs improve to 34-35 on the season and the Legends drop to 37-32.

The RiverDogs plated their first run of the game in the top of the first. Wilkerman Garcia lined a single down the left field line then was brought home on an RBI single by Steven Sensely and Charleston led 1-0.

The RiverDogs would go on to score four more runs in the third. Cabrera was hit by a pitch then advanced to third on a single by Sensely. Lopez brought home Cabrera, further extending Charleston’s lead to 4-0. With runners at first and second, Molina lined a two-run triple to right centerfield. Welfrin Mateo popped a sacrifice fly to right field and the RiverDogs led 7-0 after the third.

Lexington attempted their comeback in the bottom of the third. Matt Morales lined a leadoff single up the middle then Brewer Hicklen blasted a two-run homer to left field, putting the Legends on the board, 7-2. Cristian Perez reached on a fielding error by the shortstop, then was doubled home by Manny Olloque. Lexington trailed 7-3 after the third.

Charleston scored their final runs of the game in the top of the fifth. Dermis Garcia leadoff the single with a home run to centerfield. Lopez reached on a Legends fielding error and was singled home by Olivares. The RiverDogs extended their lead 9-3.

The Legends scored five runs in the bottom of the sixth. Marten Gasparini reached on a fielding error by the RiverDogs then advanced to second on a groundout by Cal Jones. Gasparini then moved to third on a wild pitch by Greg Weissert and went on to score on an RBI single by Hicklen. Perez brought home Hicklen with a single and the Legends trailed 9-5. With Perez on first, Seuly Matias blasted his 23rd home run of the season, pulling Lexington within two. The very next batter, Dennicher Carrasco, also smashed a homer, and the Legends were within one run.

Rain then moved in the area and due to inclement weather and three rain delays, the game was finalized in the top of the eighth. JP Sears was awarded the win for Charleston, tossing 5.0 innings allowing three runs (two earned) on four hits while walking three and striking out six. Andres Sotillet was given the loss, pitching 4.2 innings, allowing nine runs (eight earned) on 11 hits while walking one and striking out two.

The Legends and RiverDogs meet tomorrow, June 22 at 7:05 p.m. for game two. Lexington will send RHP Yefri Del Rosario (0-2, 5.63 ERA) to face Charleston’s RHP Miguel Yajure (1-0, 3.00 ERA). Fans can come celebrate inclusiveness on our first LGBTQ+ Night presented by Lexington-Fayette Urban County Human Rights Commission and Lexington Pride Festival. When gates open at 6:00 p.m., Friday Night Live will kick off on the First Base Pavilion with live music throughout the game. Following the final out, there will be a spectacular fireworks show!