RiverDogs Take Bite Out of Legends in Series Finale 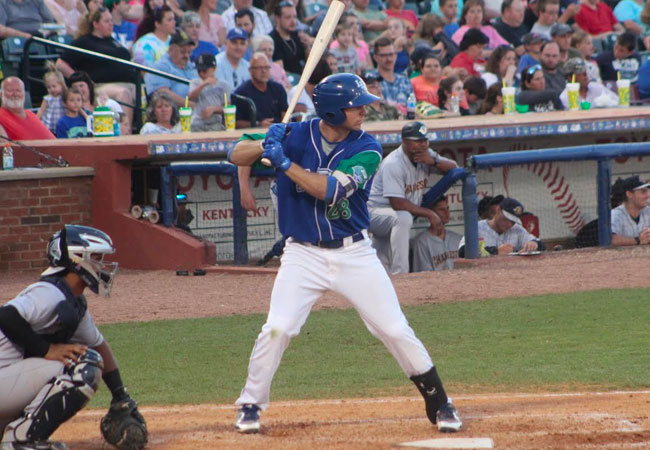 WHITAKER BANK BALLPARK (Lexington, KY) – The Lexington Legends and Charleston RiverDogs met for the series finale on Saturday, June 23 but could not avoid the sweep and fell 8-5 to the visiting RiverDogs. Brewer Hicklen hit the second grand slam of the series for Lexington, but it wasn’t enough to put the Legends on top. Lexington drops to 37-34 on the season while Charleston improves to 36-35.

The RiverDogs plated their first run of the game in the top of the second inning. Leonardo Molina reached on a one out single to left field then advanced to third on a single by Carlos Vidal. With Molina on third, Welfrin Mateo popped up a sacrifice fly to centerfield and Charleston was on the board, 1-0.

Charleston then scored four more runs in the top of the fourth. Dermis Garcia lined a leadoff single to left field and scored on an RBI double down the left field line by Molina to extend the RiverDogs’ lead 2-0. Mateo hit a groundball to the shortstop, Matt Morales who committed a fielding error, allowing Mateo to reach first and Molina to score. Eduardo Navas then doubled off the right field wall, scoring Mateo. Navas scored on another RBI double by the RiverDogs, and they led 5-0 after the fourth.

The Legends made things interesting in the bottom of the fifth. Sebastian Rivero drew the leadoff walk then moved to third on back-to-back singles by Ricky Aracena and Morales. With the bases loaded, Brewer Hicklen crushed Lexington’s second grand slam in as many days to pull the Legends within one run. Lexington trailed 5-4 after the fifth inning.

In the top of the sixth inning, Vidal smacked a solo homerun to the Pepsi Party Deck in right field and the RiverDogs led 6-4.

Lexington scored their final run of the game in the bottom of the sixth inning. Dennicher Carrasco blasted a leadoff homer to put the Legends back within one run, 6-5.

In the top of the ninth inning, Welfrin Mateo drew a walk for the RiverDogs. Olivares then blasted a two-run long ball to right field, extending Charleston’s lead 8-5.

The Legends will next welcome in the Columbia Fireflies for a three-game series kicking off tomorrow, June 24 at 4:35 p.m. The Fireflies will send RHP Zac Grotz (0-0, 2.35 ERA) to the mound and the Legends are TBD. Fans of all ages are invited to Pedal to the Park on Sunday, June 24! There will be a group start at noon from Bicycle Face with stops at Broomwagon, West Sixth Brewing and then ending at Whitaker Bank Ballpark for a bike parade around the warning track 30 minutes before the game. Fans can leave their bicycle with our bike valet and then enjoy an afternoon Legends game with friends! Ticket can be purchased from Bicycle Face, Broomwagon or through the Legends. It is also another Free Ticket Sundaycourtesy of JiF! Kids get in FREE on Sundays! Gates will open early at 3:00 p.m. for Playtime on the Outfield until 3:30 p.m.