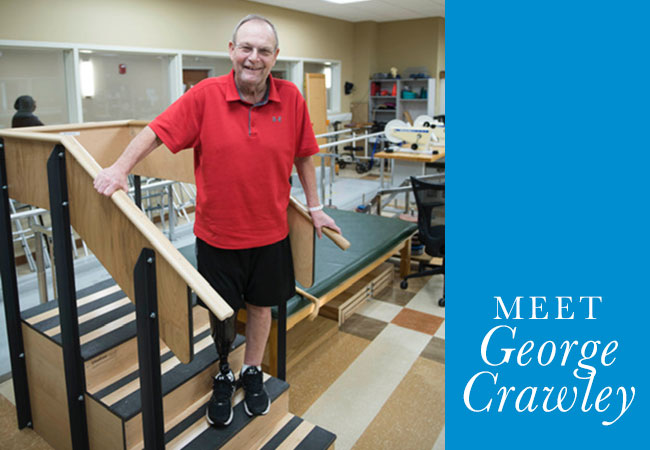 George Crawley, a 65 year-old gentleman, was admitted to Cardinal Hill Hospital on January 4th for rehab following a below the knee amputation. He was initially admitted to an acute care hospital on December 11th due to severe sepsis. George was on GRU for 13 days, then was discharged home with support services from Encompass Home Health. At that time he was non-ambulatory, requiring a slide board for all transfers and a wheelchair for all mobility. The goal was to have him at walker level, which was achieved after 3 weeks.
The goal of therapy was getting him fully prepared for his upcoming prosthetic. With his team at Cardinal Hill Rehabilitation Hospital, he worked on flexibility and tolerance to standing positions. As he demonstrated progress, George was able to transition to higher level exercises. Within 1 week of receiving his prosthetic, he was able to ambulate without an assistive device. After 4 months of intense medical and therapeutic intervention, George was literally back on his feet and well within reach of his ultimate goal: being able to walk from his car to his son’s baseball games to watch him play.