Get To Know: Dudley Webb 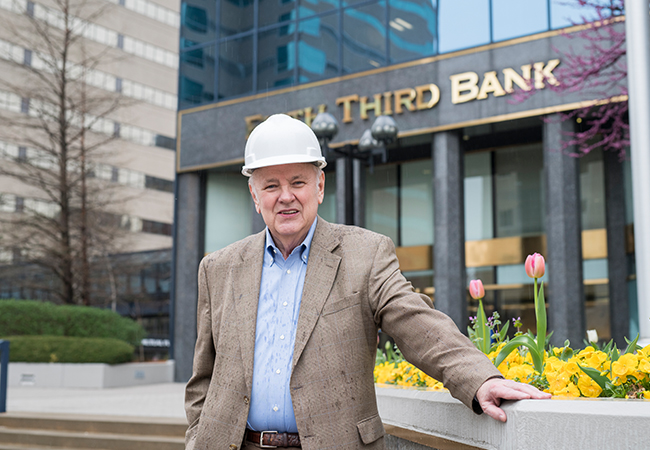 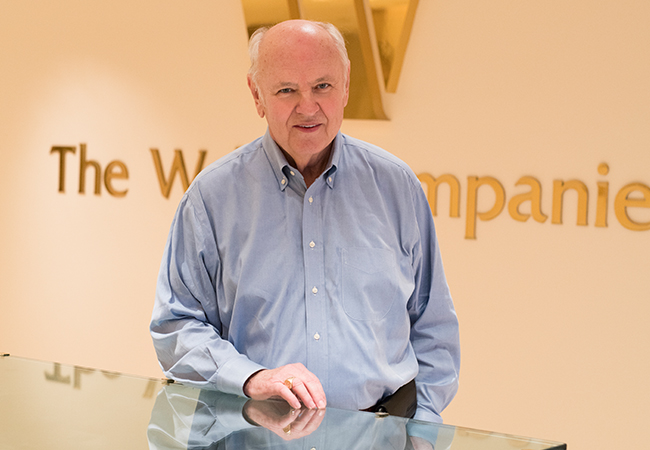 Few people have shaped the appearance of Lexington as much as Dudley Webb. The Webb Companies have developed office, mixed-use, retail, hospitality and residential properties throughout the city and across the United States since the mid-1970s. “Lexington though is special as it is our home. As a result, we value the quality of life that we have here and the green belt that surrounds us,” he said.

Webb’s latest venture in Lexington is City Center. The 800,000-square-foot project in the heart of downtown Lexington involves three 12-story buildings for hotels, offices, condominiums, shops and restaurants, and an underground parking garage with 700 spaces. The Marriott City Center Hotel and Residence Inn are expected to open in October, so look for a grand opening of City Center in the fall. In the meantime, there have been spring openings for Jeff Ruby’s Steakhouse, Starbucks and Keeneland Mercantile. Eight of the 15 condos have been sold already.

The Webb Companies and their partners own and operate the Starbucks, the parking garage, the office tower and both of the Marriott hotels in City Center. “We felt like that was the ideal convention hotel to bring here,” Webb said. “Lexington is much more than just a city of 350,000 people. It’s also all the people who come here to visit and play that make it great.”

More than 1,000 construction workers have contributed their efforts to the building of the City Center project. He anticipates another 1,200 people to be employed throughout the property. “I think it’s going to be tremen- dous and a game changer,” Webb said. “By way of comparison, the year before we bought those parcels, within the block there were 30 full-time employees,” he said.

An attorney by trade, Webb has always had an interest in construction and development. “From the time I was little, I was building log cabins, tree houses,” he said. “They got bigger and bigger.”

Webb is one of four children, two boys and two girls. “We grew up in Hot Spot, Kentucky, a coal camp that is situated nine miles out of Whitesburg,” he said. “When I grew up, when we had a chance to come to the state tour- nament or something like that, Lexington was the big city for us. When I came here I was always enamored by it.”

His older brother, Donald Webb, passed away in 2013. Donald’s son, Woodford Webb, is also an attorney and has been president of the Webb Companies since 1999. Dudley Webb reminisced about his brother’s days of working in the White House during the Lyndon Johnson administration and then practicing law in Louisville. “He was my law partner and my partner in the Webb Companies,” he said.

After earning his undergrad degree at Georgetown College and his law degree at the University of Kentucky, Dudley Webb hung out his own shingle as a solo lawyer at the old Bank of Commerce building in downtown Lexington. “I didn’t know a soul,” he said. “I rented a closet from the landlord.”

In the early 1970s, the brothers got together and formed Webb and Webb, a law firm that exists to this day; Dudley Webb still has his bar license to practice law. “I use my professional training every day,” he said. “It’s a decided advantage.”

He and his brother started investing in real estate on the side. “I really found real estate to be interesting, exciting, challenging and fun,” he said. They formed another business, the Webb Companies, and started out in residential duplexes and small retail properties. By the late ‘70s and into the 1980s, the Webb Companies focused on commercial real estate all over Lexington: Melbourne Industrial Park, Corporate Center, Tates Creek Centre, Regency Center on Moore Drive, Lexington Green on Nicholasville Road, Palomar Centre on Harrodsburg Road, Perimeter Centre on Alumni at New Circle, and downtown projects like Victorian Square (now called The Square), Festival Market (now Triangle Center), Vine Center and Lexington Financial Center. They built the Radisson Plaza Hotel in 1982, which became a Hilton in 2008.

“He did his projects and I did mine, but never the twain would meet,” Webb said.

“That’s the way you stay brothers and get along as family, I think. I trusted him; he trusted me. He did the Woodlands, for example, while I was doing the Hilton. He did Moore Drive; I was do- ing Tates Creek Centre.”

The Webb Companies also developed the Omni Hotel in Austin, Texas, the Marriott Hotel on the Riverwalk in San Antonio, Dulles Corner just outside of Washington, D.C., the CalFed building in downtown San Fran- cisco and properties in 60 other cities across the U.S. In the 1990s, the Webb Companies had a hospitality busi- ness that owned and operated 17 hotels across the country. “We did it a step at a time,” Webb said. “We seized the opportunities. We try to think ahead.”

"Lexington is much more than just a city of 350,000 people. It's also all the people who come here to visit and play that make it great."

It took 10 years to put together the City Center project. Original- ly, it was called CentrePointe but the name was changed to City Center in the spring of 2018. “In 2008 we were ready to go,” Webb said. “We had a European investor at that point in time, and the great recession hit. We signed documents in June and September is when the world fell apart. No projects went forward for five years. I wasn’t embarrassed by it; it was just a fact of life. It re- quired a great amount of patience, perseverance and hard work, but we never wavered in our commitment to bring it to fruition.”

With four decades, and counting, of real estate experience un- der his belt, Webb has been through far more ups than downs. “They’re all not going to work out,” he said. “I just smile and go on. You have to do that to be a developer.” His advice for anyone interested in a career in commercial real estate is to get in at the entry level. “Start as at the bottom and work your way up if that’s what it takes. Learn it bit by bit, day by day, and be pre- pared to pay the price because it takes time.” He added that luck can also be a factor. “I’ve had access to great partners and trusted associates who helped me through the years ,” he said. “It’s been an interesting ride.”

Even though he’s involved with City Center on a daily basis, he also has other projects in the works. “We just bought the big gold building, the BB&T building,” he said of the bank building on West Vine. “We’re working with BB&T to see what they want to do.”

“They have a great team,” Webb said of Greer Companies. “They’re bigtime employers as well in this community. Phil has kind of flown under the radar but he’s very successful and doing great. Hard work and perseverance, that’s what gets it done.”

Webb and his wife, Marla, have three kids in college now. Their twin sons are at different schools; one is a senior at the University of Alabama and will start law school at UK in the fall and the oth- er is also a senior studying Media Arts at UK. The Webbs’ daugh- ter is studying at Georgetown University in Washington, D.C.

“I got married after 51 years of bachelorhood,” Webb said, admit- ting that he calls his mother-in-law “Governor.” That’s because she is Gov. Martha Layne Collins, so far Kentucky’s only woman governor.

At this point, Webb has no thoughts of retiring. “I think I would go crazy if I were going to retire,” he said. “I’d be bored stiff.”

As for City Center? “It’s the crown jewel of all of the projects that we’ve done,” Webb said. “It’s going to be really neat.”