Donna Barton Brothers to be BGFC’s fundraiser guest of honor 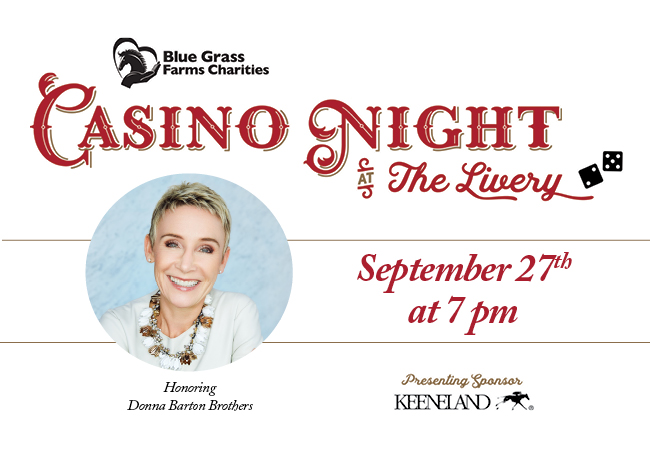 For more information about Casino Night at the Livery- click here

Blue Grass Farms Charities is pleased to announce Donna Barton Brothers as this year’s guest of honor for Casino Night at the Livery, BGFC’s annual fundraiser.  This year’s event will be held Friday, September 27 at 7 p.m. at The Livery located at 242 Water Street, Lexington.

“We couldn’t be more delighted to have Donna as this year’s guest of honor.   She is such an important part of the racing community,” says Julie Berry, Executive Director for Blue Grass Farms Charities.  “Having her represent Casino Night will promote goodwill in the industry and support for the farm workers.”

Donna Barton Brothers is most recognizable for her coverage of horse racing on NBC Sports but her involvement in horse racing has been a lifelong passion. Her mother, Patti Barton, was one of the first half dozen women to be licensed as a jockey in the United States—she retired in 1984 as the leading female jockey in the nation with just over 1,200 wins. As “Donna Barton”, Donna rode races from 1987 to 1998 and retired in 1998 as the second leading female jockey in the United States by money earned. She won 1,130 races.

Casino night’s annual fundraising proceeds benefit the BGFC’s mission to provide health and human services to people working in Central Kentucky’s Thoroughbred Industry.  The evening will consist of live jazz, delicious Kentucky cuisine, ‘mock’ gaming tables to try your hand, bourbons and other libations as entertainment for all to enjoy.

The live and silent auctioning will be the envy of auctions where past items have included exotic trips, Pappy Van Winkle, Triple Crown winners’ halters and memorabilia, Breeder’s Cup tickets, Keeneland passes and box seating, beautiful equine artwork and more.  This year’s items are sure to tease the shopper, who can place their mobile bid prior and during the event.

Tickets are $100 per person. Keeneland is presenting sponsor with other sponsorship levels available.  For more information about Casino Night at the Livery go to www.bgfcky.org/event.