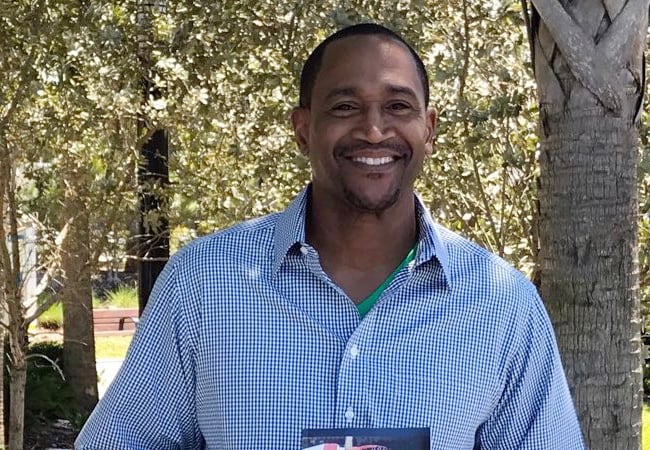 Once he got out of coaching in 2014, Reggie Hanson wasn’t exactly sure what he would do. However, the former University of Kentucky basketball player quickly had numerous inquiries from the corporate world about coming to work.

“In coaching, you develop certain skills that people in the corporate world want,” said Hanson. “I tried several different things that did not fit before I found what I really like.”

Hanson says working in management at Dillard’s in Tampa is a lot like coaching because he had to build a team and organization.

“As a coach, you motivate players the right way to build confidence and instill discipline,” Hanson said. “Now, I still have to recruit the right people that fit with what I want and then make them good at what they do. The only difference is that instead of being about winning and losing, it’s about sales. But I love it and we are thriving.”

Hanson scored 1,167 points during his UK career from 1987-91 before later spending seven seasons on coach Tubby Smith’s UK staff after his playing and coaching career in  Japan ended. He opted to stay at Kentucky when coach Eddie Sutton was fired and Rick Pitino arrived. Hanson’s devotion to the program led Pitino to rename the team’s sacrifice award to the Reggie Hanson Sacrifice Award.

Pitino often said that Hanson was his most crucial recruit because he helped hold the team together when the Cats were on probation when Pitino took over. Hanson could have transferred to any school and been eligible as some did but stayed at Kentucky.

“Rick has told me he didn’t know what he would have done if I had not stayed,” Hanson said. “My mother told me to trust in God and follow my heart. I signed up to come to Kentucky. Did I sign up for us to be part of an NCAA investigation or go on probation? No. But in life, if you start something, you’ve got to deal with it. Every player wants to make his stamp on the program in some way. For me, it was staying and helping the program get back to being dominant.

“Rick told me I could develop into one of the top players in the SEC and be one of the most beloved players ever to UK fans. I gave up a lot to stay at Kentucky and get the program back on track. I don’t regret it one bit. Rick did a lot of things to promote me.”

Dealing with adversity as he did is one of the lessons in Hanson’s new book, “10 Life Lessons: Learned as a Student-Athlete.”

“I took my experiences at UK as a player for Rick Pitino the last three years and how each experience translated to real life,” Hanson said. “I give some funny stories about things that happened to me to make the book more interesting.”

“I am glued to the game now. I love the game and keep up with the Cats and college basketball and the NBA,” Hanson said.

He admits there are times he misses coaching, but he loves living in “year-round nice weather” in Tampa. His book was one way for him to stay connected to basketball at a time when more student-athletes are transferring than ever before. He hopes his book offers life advice for players and coaches. He also encourages fans to read the book.

“Fans all mean well but they are not caught up in what the athlete goes through daily. If you are playing great, they love you. If you are playing bad, they tell you how bad you are,” he said. “You have got to respect that they have their opinion but fans have to figure kids ages 17 to 20 are trying to succeed and figure life out at the same time.”

Sometimes fan experiences turn out different than anyone could expect. Hanson was a junior at UK when two Lexington high school sophomores — David Pulito and Josh Hopkins — met him in the Wildcat Lodge parking lot.

“We ran over starstruck and he was nice enough to humor us and talk for a bit,” Hopkins, now a TV star, said. “Somehow we badgered him into giving us his number. We called and said we had something to bring him and went over and gave him a VHS of Michael Jordan’s ‘Come Fly with Me,’ some candy, basketball cards and two goldfish.

“It’s embarrassing to admit all of this but Reggie was so nice to us. I never forgot it. We came by a few more times to say hello and then finally we were too embarrassed to keep bugging him.”

Hopkins was one of the first to buy Hanson’s book and the player’s encounter with the “famous” actor is included in the book.

“I want to get kids to understand you are a role model and have an impact that could go a long way and why it is important to treat all fans the same. I just was nice to a couple of high school guys and now I have a friendship with a famous actor,” Hanson said. “Our relationship has grown each year. I am very proud of Josh and David, who is a successful real estate agent in Lexington.