ART IN THE BLUEGRASS: A MUSICAL WITH A MISSION 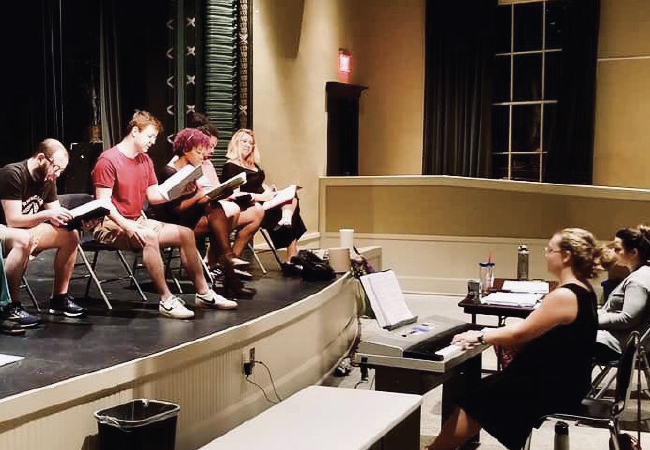 Anyone who has battled addiction or been close with someone who has knows that the path to recovery is far from linear. Every journey is different, every story is unique, and often from the ashes of coming to terms with facing one’s biggest demons can come moments of understanding, support and levity among a group. There is something cathartic, however, when so many different perspectives merge under the banner of recovery, acceptance and healing.

Last Call, the musical is an authentic look at an Alcoholics Anonymous meeting being held in in the basement of a church. Individuals from all walks of life, each struggling with their own sets of challenges, create a community amongst themselves where they feel heard, understood and respected.

“Our approach was to present the subject matter as honestly as possible,” said Last Call director Trent Stephens. “If you present a subject honestly, people are able to naturally dispel many of the misconceptions they have about it. [The musical’s] frankness serves the topic in that way.”

While the subject matter may seem heavy, just as in real life, the musical adaptation of an AA meeting offers moments of self-reflection, honesty and humor as the group works through not only their own personal struggles to stay sober, but everything from disruptive newcomers and loss of friends to overdoses to the threat of losing their long-time meeting place.

The over-arching theme of the play, or in nearly any real-life situation in which a person is working to overcome addiction, is community and the role one’s advocates and peers can play in one’s journey through recovery.

“The play has a tremendous amount of levity because it’s written by someone who is well-versed in the world of recovery,” said Stephens. “When you go to meetings, you realize it’s not a depressing scene. They’re each doing the best they can and laugh together.”

Written by Soni Cantrell-Smith, John Kito and Margo Buchanan, the piece is not only timely, but can speak to a wide audience, from those who have dealt firsthand with addiction to those who have yet to confront their own issues or are only familiar with the topic peripherally.

“Approximately 15 million Americans have an alcohol use disorder, but only around 7 percent of those ever receive treatment,” said Cantrell-Smith. “Last Call educates its audience with drama and humor; a new understanding of the importance of community and the role community plays in supporting someone in recovery. This could be the most important musical of your life.”

The musical with a mission is the latest effort by the nonprofit production company Antagonist Productions, a Lexington-based theatrical company whose mission focuses on supporting local artists to bring mainstream, yet often marginalized, issues to the stage.

While only two-years-old, the production company has already had a profound impact in the community, bringing everything from original works written by local playwrights to everything from Shakespeare’s greatest plays to pieces penned by prison inmates to the aters, parks and festivals around the Bluegrass. They also produce a weekly radio show, “Backstage with Antagonist Productions” on 93.9 WLXU FM, which offers behind-the-scenes insights from the actors, directors, crew and writers that bring the often-delicate subject matter of their plays and musicals to life.

“By the very definition of the plays we select, we inherit a lot of risk, but with great risk can come great payoff. All of our shows have a different mission or social bent,” said Stephens, who is on the board for Antagonist Productions. “I think Last Call will be our biggest accomplishment to date. We’re lucky its message has garnered the attention it has before it’s even opened. All we can hope is that some old stigmas can be dispelled.”