BREAKING THE BRONZE CEILING: WHERE ARE THE WOMEN? 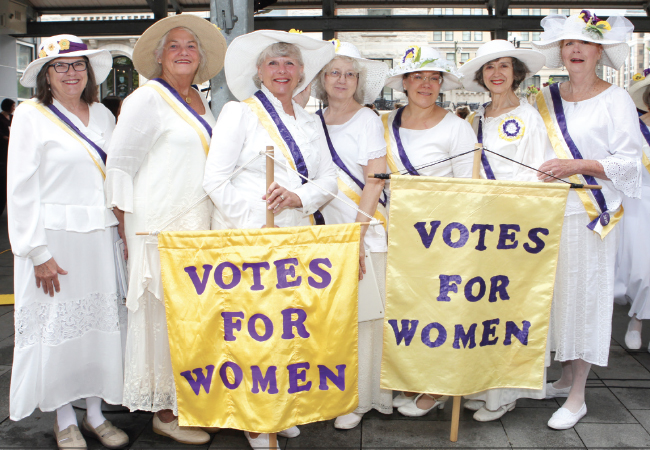 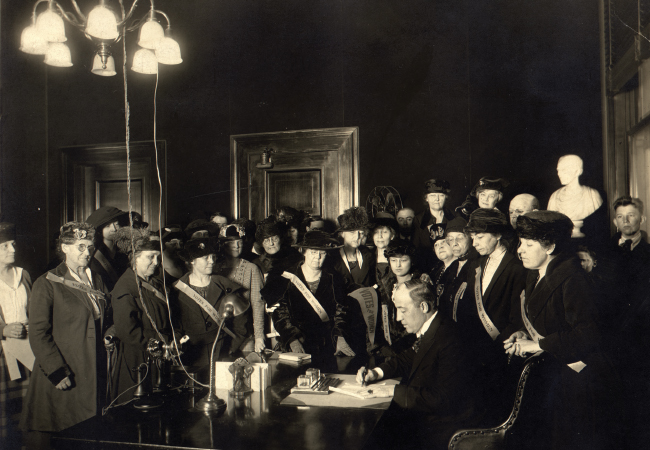 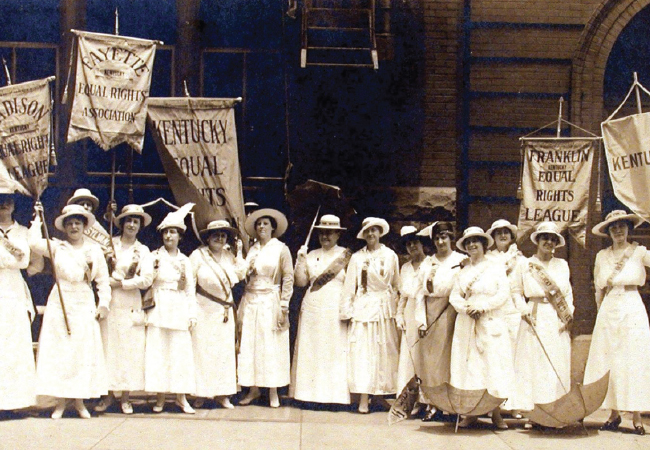 âWomen have suffered agony of soul which you can never comprehend, that you and your daughters might inherit political freedom. That vote has been costly. Prize it!â - Carrie Chapman Catt, 1920 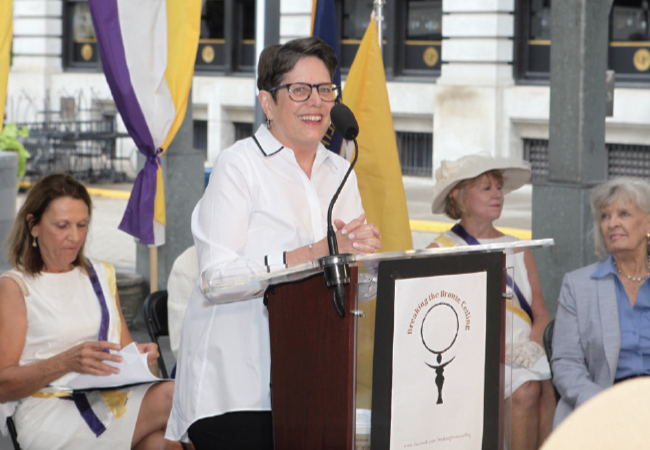 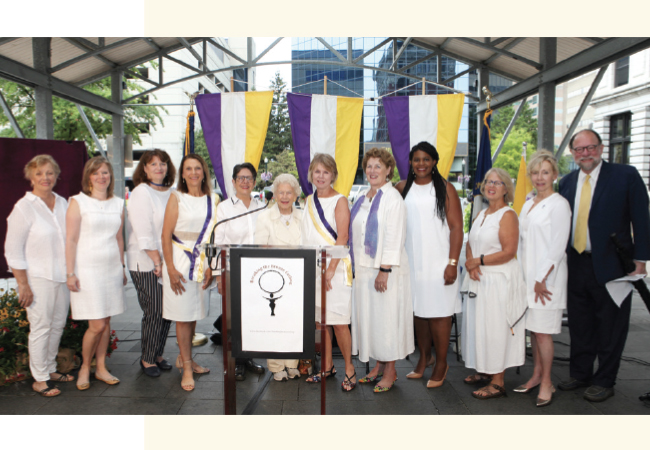 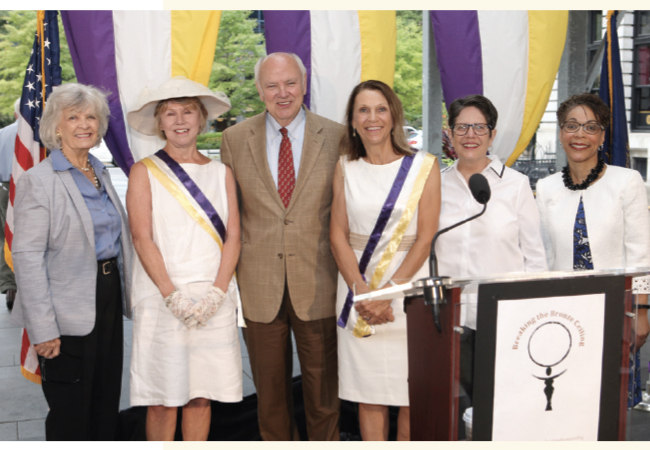 In 2017, a small group of dynamic women formed the BREAKING THE BRONZE CEILING initiative to raise funds to erect a monument in downtown Lexington in 2020 to recognize historical contributions of women. August 2020 is the 100th anniversary of the 19th Amendment to the Constitution, which secured women the right to vote.

The mission of Breaking the Bronze Ceiling is simple: honor the past, inform the present and inspire future generations. They seek to deepen the community’s understanding of women’s contribu- tions to history. The movement to increase women’s representa- tion in public art is about more than just a monument: it is about sending a message to our children that 51% of the population has also had a hand in shaping history.

It was Mossotti’s brainchild to form the committee after reading an eye-opening article in TIME magazine in August of 2017 which revealed that fewer than 7% of the 5,193 monuments in the UnitedStates recognize women. In Lexington, public art commemorating women’s history does not exist. “There’s a glaring omission when it comes to Lexington’s public art: women.” Mossotti asked, “Where are the women?”

Councilmember Kathy Plomin is Co-Chair and spearheading the fundraising effort. “The timing, with the 100th anniversary of the 19th Amendment, is cause for great celebration. We have set a goal of $500,000 and are fast approaching the halfway point. However, we need more of the community’s financial support to make this a reality,” said Plomin, who adds that a variety of high-profile sponsorship opportunities are available.

Community response has been overwhelmingly positive, including a start-up donation of $100,000 approved by Lexington’s Urban County Council in 2018 and the passing of a special resolu- tion expressing full support of increasing female representation in street names, public art and appointed commissions by 2020.

Fighting for their future

The campaign for women’s voting rights began early in the 20th century and lasted more than seven decades. Along the way, women planned, organized, lobbied, petitioned, paraded, picketed, starved and shed their blood for the right to vote. Their efforts were met with ridicule, character assassination, substantial fines and torture—and yet they persisted. Again and again, they would not be denied.

Kentucky passed the nation’s first statewide women’s suffrage law in 1838. However, it only permitted female heads-of-household to vote in elections involving schools and taxes. Few women qualified. Fewer still even knew about it.

A Woman Suffrage resolution was proposed in the U.S. Congress in 1878. Consideration was “indefinitely postponed.” Forty thousand women turned out to march in a New York City suffrage parade in 1915. Many women wore white and carried placards. The Breaking the Bronze Ceiling steering committee and supporters at several recent Lexington events have adopted that symbolism.

The U.S. Senate finally passed the 19th Amendment in 1919 and the ratification process began. Suffragists waged 56 electoral campaigns in 31 states, eventually winning ratification by the necessary 36 state legislatures. Kentucky was the 23rd state to ratify. The amendment was added to the U.S. Constitution on August 26, 1920. Three months later, in a presidential election year, millions of women across the country were able to vote for the first time. It took 72 years of fierce struggle for American women to win the vote. The face of the American electorate changed forever.

But for black women, the struggle did not end there. They were, for decades after that, routinely turned away from the ballot box. Only in 1965 with the Voting Rights Act and subsequent court decisions were the tools of disenfranchisement that targeted people of color—including poll taxes and literacy tests—outlawed.1

On August 26th, the Breaking the Bronze Ceiling steering committee held a press conference in downtown Lexington at the Fifth-Third Plaza on West Vine Street—held in conjunction with Women’s Equality Day. They revealed the location for the monument that will eventually be erected in that public area. The Webb Companies has generously donated space on the plaza where the monument will stand.

While other tributes to women and their historical contributions are in the works across Kentucky for 2020, Lexington is the only city in Kentucky that is planning a permanent monument paying tribute to women. The Lexington History Museum is also presently planning a related exhibit for the summer of 2020.

Earlier this year, the Breaking the Bronze Ceiling steering committee issued a nationwide call to artists interested in creating a monument in Lexington: the interest was substantial. More than 120 replies were received. The field of prospective artists has since been narrowed to just four. Collectively, the artists have been commissioned to create hundreds of prominent works of art, both nationally and internationally. A finalist is expected to be chosen this fall and work is planned to begin soon thereafter in order to meet the committee’s goal of an August 2020 unveiling.

“We’re not seeking parity between the sexes in public art here in Lexington,” Mossotti said. “But there is certainly room for at least one fitting tribute to women. That would be a step in the right direction. We simply seek to shine a light on the inspiring contributions of remarkable women from all classes and backgrounds and walks of life that should not be forgotten.” •

To make a secure, online donation or for more information on Breaking The Bronze Ceiling, visit BREAKINGTHEBRONZECEILING.COM.

Sponsorships and donations are tax-deductible through the Blue Grass Community Foundation. Donations can also be mailed to: