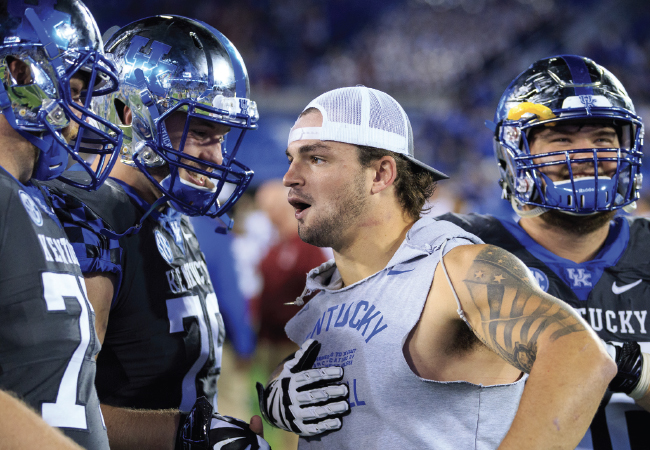 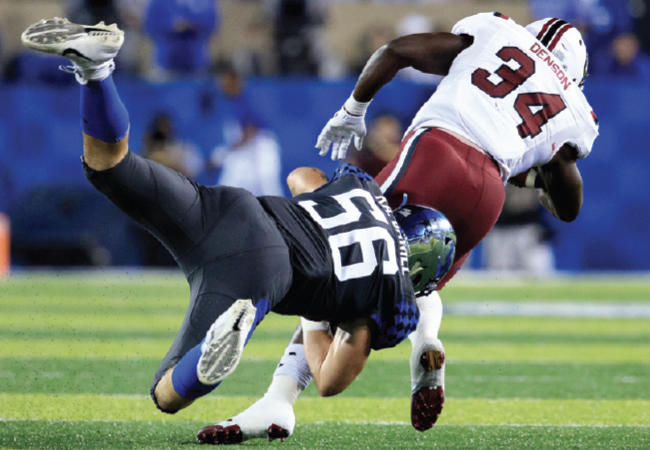 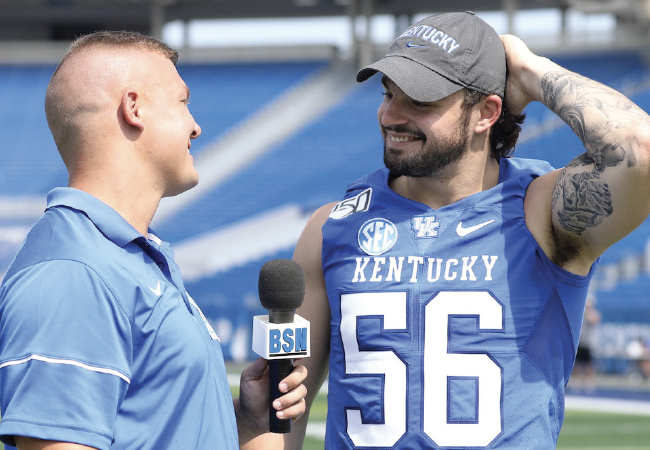 One word that Kentucky coach Mark Stoops uses to describe senior linebacker Kash Daniel is "authentic." With Daniel, what you see is what you get.

Being authentic sometimes includes some brash statements from Daniel, especially if he feels Kentucky is the target of disrespect. Teammates don't mind.

"This is my third year with him, so he can't surprise me no more. You got to have that guy in the middle (of the defense)," said junior nose guard Quinton Bohanan. "The way he is off the field, that's the way he is on the field, too. If you want to say one person or thing can be a symbol for Kentucky football, it is Kash.

"Everything he does he deserves because he has worked for it. He is blue-collar. If he thinks anybody doubts us, he is going to speak his mind and talk about it. We like that about him."

So do fans who lined up at UK's Fan Day last month to get autographs from the Paintsville native who indeed might be the face of the UK football program this year. He was featured in a commercial about Kentucky football that aired during the Super Bowl. He was one of three Cats at SEC Media Days. He's on one of the UK football posters.

"I love his personality. That's what this team kind of needs this year," tight end Justin Rigg said. "It's terrific to have him saying and doing the things he does to let everybody know Kentucky football is not going away."

Daniel grew up with a blue-collar background in eastern Kentucky and while he wants to do well for himself, he puts the team first. Fans and teammates relate well to that.

He was a preseason all-SEC selection after making 84 tackles last year despite playing part of the season with a broken hand. He played in every game as a freshman and sophomore mainly on special teams and he had the courage to admit he had to change to be the player and leader he wanted.

Daniel says he didn't have his priorities straight. He was falling behind in school and not being the role model he wanted to be.

"It took a personal kick in the tail for me to say, 'Hey, you got a lot of people counting on you and wanting you to succeed. You have got to want it more than what other people do.' I changed my lifestyle. I changed my mindset," Daniel said.

After the 2017 season, he told coaches to push him harder, demand more from him because he wanted to be an all-SEC player.

"I had a decision to make. Do I want to be an all-SEC beer drinker or do I want to be an all-SEC linebacker? That's what it boiled down to," Daniel said. "You have the path of least resistance (beer drinker) or the hard path (linebacker). I chose the hard path and I am very grateful that I did that. Not only has it helped me on the football field but it will ultimately help me off the field as well."

Darin Hinshaw is Kentucky's co-offensive coordinator. He understands the uniqueness Daniel brings to the team.

"The minute he walks in the building, something is happening. From his hair to everything he does to how he leads, it's a lot of fun having a guy like Kash on your team. He is a great example of a young guy who became a leader for us. We need more of that," Hinshaw said.

Daniel admits the attention of media members, as well as social media, has made him understand more is expected from him this season.

"It's not the pressure from things I say as much as being a senior and returning starter," Daniel said. "It's simply time to come out and play ball. Not change anything, not change who I am, not change the way I go about things. Just go to work."

"I always say how I feel. I believe being a confident person in life, in anything you do, that's half the battle. If you don't believe in yourself, then who will? And I believe in myself and our team."