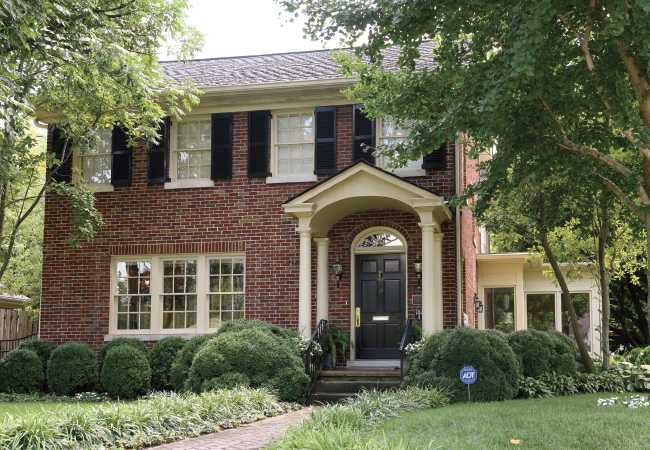 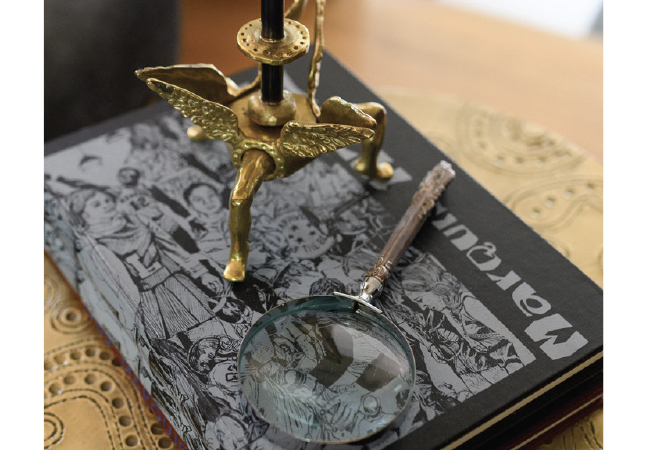 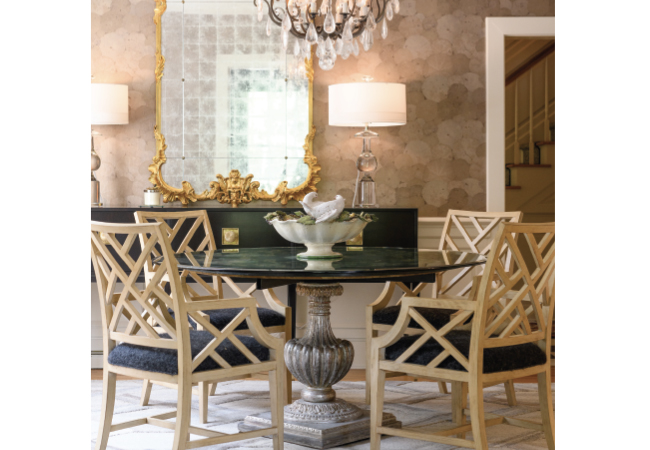 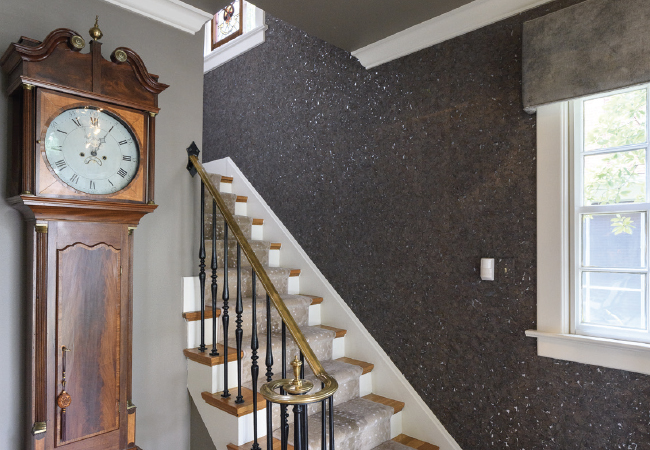 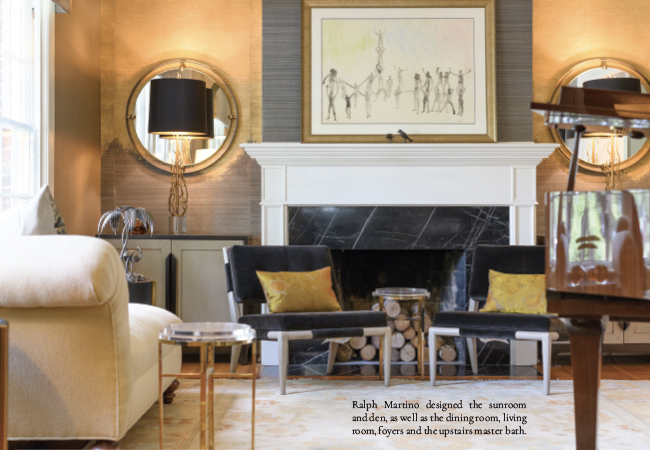 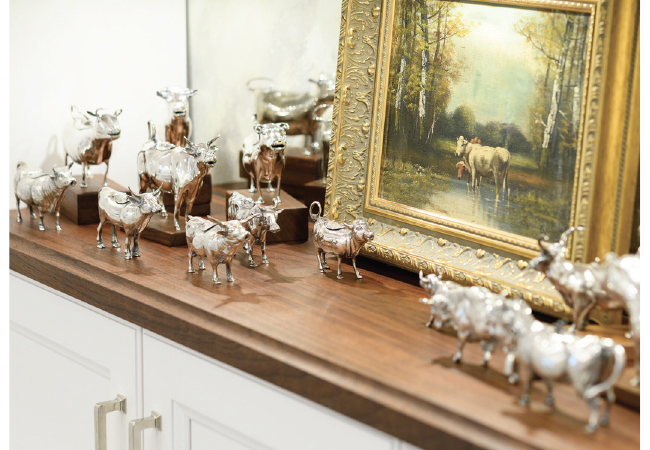 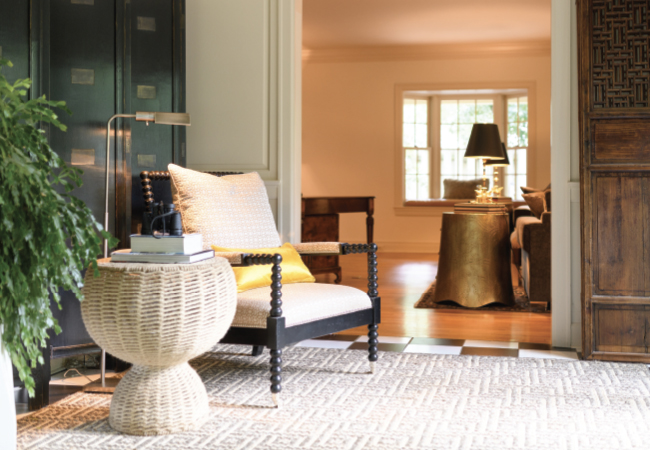 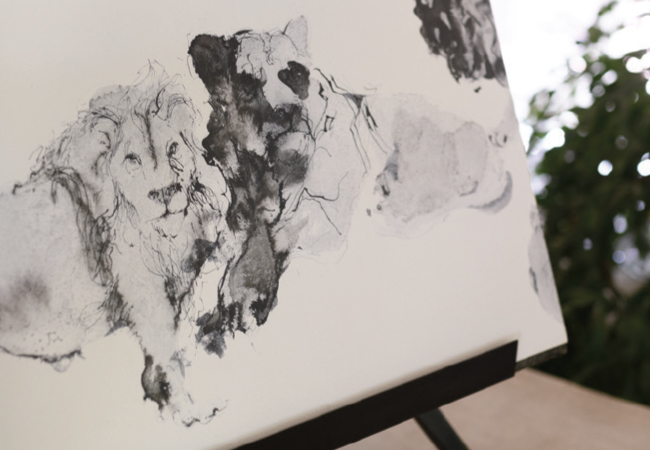 After spending two decades in their South Hanover home, Janie Fergus and John Meyers realized they were ready for a revamp the Lexington natives purchased the home, originally built in 1922, upon getting married and have been there ever since Moving is not an option. Janie explains, “I couldn’t leave Ashland Park the location is perfect for us. We love it for the historic homes, going to Ashland, home of Henry Clay, for dog walks, the friends and neighbors, and its proximity to local restaurants, shopping, groceries and, of course, our veterinarian.” Their two dogs Cricket and Ned are a vital part of the family.
Janie and John were still content with the fundamental bones and layout According to Janie,“The home has large open areas which fit our lifestyle”. And, of course, as the president of Blue Grass Trust for Historic Preservation, she wanted to maintain the architectural integrity of the nearly century-old, two-story home “I love and appreciate the characteristics of historic design”. To update and renovate the residence without compromising its traditional qualities, they employed a team of some of the best in business The team included Vimont Builders; architecture and design firm, Pohl Rosa Pohl; Ralph Martino of Christopher Michael Fine Furniture; Judy Strassburg of Guthrie Strassburg Interiors; and Debra Hupman of Creative Kitchen & Bath.

Using nature as her primary inspiration, Janie wanted to highlight organic elements and natural textures It was important to maintain a color palette of “natural and subdued colors, which are soothing and calm.” Additionally, the couple’s special interests influenced much of the decor and include original art and objects collected while traveling Some of the decorative items are antiques procured from local dealers and found at the annual Bluegrass Trust for Historic Preservation Antique and Garden Show as well as family heirlooms like a Kentucky-made sugar chest from Janie’s grandmother Fergus . Their extensive collection of art is a combination of contemporary, by artists such as John Tuska and Martin LaBorde and historical pieces, including several English 18th century paintings New elements from Christopher Michael Fine Furniture were mixed in to invigorate the existing décor.

The sunroom exemplifies this eclectic approach to decorating and is where Janie, who is enjoying her retirement (after a career in information technology management including CIO at the Saint Joseph Health System) most enjoys spending her leisure time. Three walls of windows allow the outdoors to pour in and nods to nature abound. Janie explains, “Ralph said, ‘This just needs to be an extension of the garden,” and I fully agreed.” A circular wood top table with a gleaming brass base and silver starburst mirror juxtapose aged, wooden screens and a columned, stone console displaying a shell art terrarium by Ron Meece. Rustic influences like birch branches, concrete planters, and a jute table pepper the sunroom. Several pieces of leaded glass, created by internationally known artist Guy Kemper, from very early in his career, catch the sun. The comfortable chaise provides the perfect spot for Janie to read the latest selection for her beloved book club. An antique secretary writing desk offers the ideal view while working.

John prefers to relax and unwind in the adjoining den as it houses two of his favorite pieces: a coffee table that features an ancient Roman mosaic dating back to near 300AD, which reflects his love of Roman history, as well as a wooden partner’s desk. Several other components add to the classical feel of the family room. Above the green marble fireplace hang a pair of graphite drawings depicting Neptune from a Brazilian artist. Built-in bookshelves, a set of bay windows, one with a tan ostrich leather seat, round out the refined character of the den. However, John, who serves as the Executive Director of Kentucky Bar Association and is an avid UK sports fan, resolved to include a large TV for friends to gather around to watch the games. To keep the sophisticated feel of the room while accommodating a substantial screen proved challenging. Ultimately, the television was hung against a dark, natural husk wallpaper causing it to all but disappear when not in use.