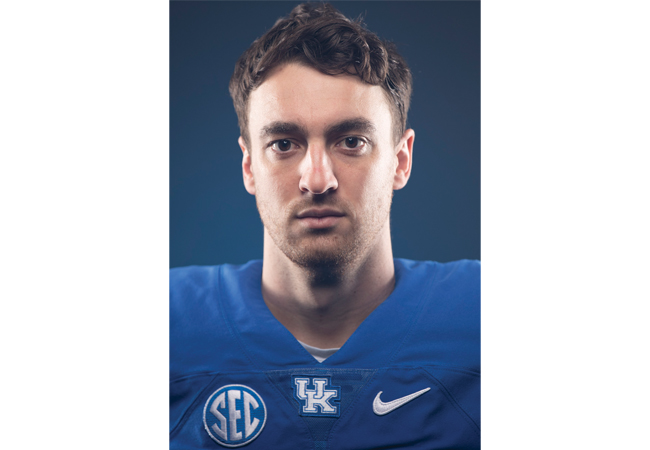 For Australian Max Duffy, life could not be much better in Lexington than what it has been since he arrived to be- come the punter for the University of Kentucky football team in 2018.

“It has been an awesome experience,” Duffy said. “It has given me a second chance in life. The experience has already been something I will cherish for a long time. It’s been different and taken me out of my comfort zone and allowed me to live and study in a different country.”

His recruiting story is not one that will ever be easy to top. He grew up playing basketball and soccer before switching to Australian Rules Foot- ball at age 15. However, he was work- ing as a tree lopper — “I cut down trees with a bunch of friends I played football with” — while playing in the West Australian Football League before being picked in the 2012 Australian Football League draft. How- ever, shoulder and hamstring injuries limited his play in 2013 and 2014 and when he was finally cut from the league, he signed with Prokick Australia, moved across the country from Perth to Melbourne to train, and eventually came to the United States after four months of train- ing as a punter to try out for college teams.

He punted at Alabama, Auburn and Tennessee for coaches and scouts. He sat in Alabama coach Nick Saban’s office and said it was “really cool” even though he didn’t get a scholarship offer.

“Now I have an even greater appreciation of how neat that was. At the time, I did not really know that much about Alabama football. I was still just getting the hang of punting,” Duffy, 26, said. “It ended up being nine months until I actually got my first offer after I started punting. It felt pretty natural but it took a bit of time to get used to the spiral (of the football) and wearing pads and a helmet that is really heavy. I also had to learn about the rush (from the defense) and what the rules were.”

He learned so well that he got an offer from Kentucky and through his agreement with Prokick that mandated he take his first “suitable” offer, he became a Wildcat knowing very little about the program or city.

“I had never even seen snow before but Lexington is an awe- some city,” Duffy said. “It kind of feels like a small country town back home without a lot of the traffic. There is a lot to do and the city really gets behind the team. I have loved every minute  of it.”

He became somewhat of a fan favorite because of his ability to flip field position and his unusual punting style. Duffy isn’t sure, though, why he’s been noticed so much by fans.

“I am just a punter. I don’t really do much,” Duffy said. “I guess maybe I just bring a different element from a different country. People laugh at what I say and the way I talk. But the support of the fans has been great. To acknowledge punting is important and to get a clap walking off the field was pretty cool.”

Unlike a lot of college players, Duffy does not fantasize about playing in the NFL. He would be happy for the opportunity to do that, but getting his Master’s degree is his main priority.

“Playing in the NFL would be a dream but whether that is realistic or not I don’t know,” Duffy said. “Academics is why I am here. If I just got to work out for a team or punt in a preseason game, then my life dream would be completed. It would be awesome if I just could get a tryout.

“I am here to finish my Master’s and I know I am probably not good enough to even make the NFL. I want to coach back home or be a sports psychologist working with elite athletes back home. Either one would be ideal and I am just thankful I got to come to Kentucky so I can hopefully make that happen.That's why my education is my first priority.”