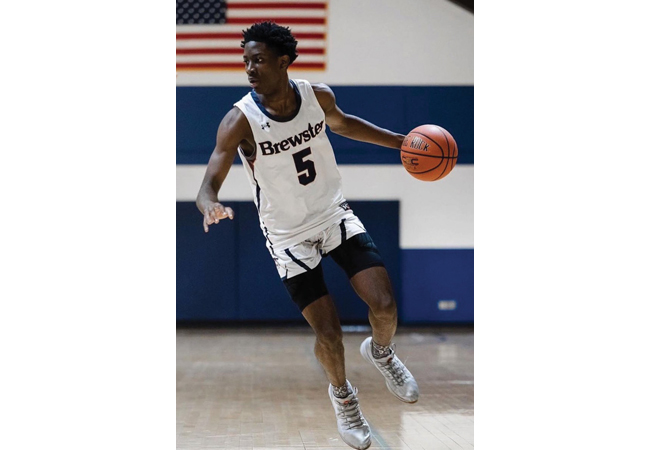 If you like Tyrese Maxey’s infectious smile, then chances are you will certainly like recent Kentucky basketball signee Terrence Clarke.

“Terrence is a very charismatic young man. He has a million dollar smile that just lights up a room,” said Jason Smith, Clarke’s coach at Brewster Academy in New Hampshire. “We have had a lot of talented kids here over the years but not any have had the reputation he has while here in high school.”

Smith is also the associate director of admission at the school and noted how families got a questionnaire before visiting the school that asks if there is anyone in particular they would like to meet on the visit.

“Usually it would be like an art or history teacher or maybe a soccer coach,” Smith said. “In the last month we’ve had 10 or 15 asking to meet Terrence Clarke. That’s never happened.”

If Rivals.com recruiting writer David Sisk is right, that attention will only increase when Clarke gets to Kentucky next year.

“If a football team has a great receiver, you just throw it up to him and he comes down with it,” Sisk said. “Put Clarke in a one-on-one situation and give him the ball and he is going to score. John Calipari has not had a guard like him since he has been at Kentucky.

“John Wall would be the closest thing, but Terrence Clarke is a better shooter. He has all of the tools and God-given ability any player could ever want.”

Wall was the No. 1 overall draft pick in 2010 NBA draft after one year at UK and is a five-time NBA All-Star.

“John Wall was dynamic and a playmaker but with Clarke you can just say go get a basket and he will do it. There’s not many players who can do that,” Sisk said.

Give Calipari credit for sensing that early. When Clarke was a freshman, Calipari started recruiting him. The Boston native still remembers the first day coaches could contact players his freshman year and Calipari was the first coach to contact him. That made a lasting impression on Clarke, who also reclassified from the 2021 to the 2020 recruiting class when he picked UK.

Smith says only a true “hoops junkie” understands the level of basketball talent at New England prep schools. Current NBA standout Donovan Mitchell, who played at Louisville, didn’t average over 12 points per game in his two years at Brewster.

“We have a talented team and he knows if you are not playing and going hard somebody is waiting be- hind you to take your spot,” Smith said. “Terrence does possess a tremendous desire to be in the gym, which is different from a lot of his peers the last few years. He is consumed with getting better and has a great work ethic that coach Cal really likes. He’s a typical teenager playing video games and hanging out with friends but he’s mainly consumed with basketball.”

Smith wants to see Clarke become a better rebounder and defender — perhaps even a “lockdown” defender — this season. However, like Sisk, he knows Clarke’s offensive skills are extraordinary.

“His ability to create separation from a defender is as good as any- one I have ever coached here. It is off the chart,” Smith said. “He needs to be a more consistent 3-point  shooter and is putting in the time to do that. But his ability to create space is at the elite level.

“He’s going to Kentucky because of coach Cal’s reputation, the school’s tradition, the proven history of putting guys in to the NBA that are successful, and to be around other high level players. If he had not wanted to play with or be around other high level players, he would not have come to Brewster. He’s not afraid to share the spotlight the way Cal likes his guys to do and he’ll listen and do what Cal tells him to do for the team and to get better.”