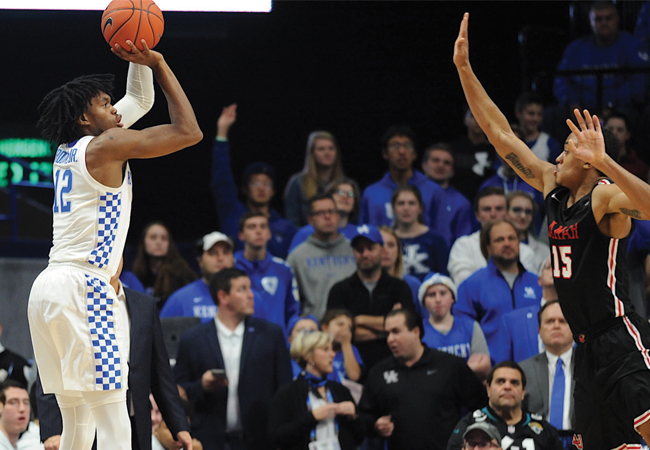 Keion Brooks Jr. says long before he was being re- cruited by the University of Kentucky he knew for- mer Wildcat P.J. Washington, who is now having a fabulous rookie season with the Charlotte Hornets.

The UK freshman said Washington’s success at UK had a “good influence” on his decision to sign with the Wildcats.

“I saw what he was able to do coming here and the success he had,” Brooks Jr. said. “I also got some pointers and little nuances of how to be successful here from him, and that has been good for me.”

Brooks said Washington told him about the Ken- tucky fan support but he quickly learned just how admired UK basketball players are and become role models for young fans across the state.

He learned that from his father, Keion Brooks Sr. who played basketball at Wright State and then pro- fessionally.

“My dad being a Division I player and turning pro- fessional for a couple of years and then he gave up his dream of being a professional player to raise me and put me where I am today. He has had a great impact on my life,” Brooks Jr. said. “Every time I step on the court I try to make sure I am doing him jus- tice and being a good representation of him on the court.

“He knows I am in college now and have a lot of my plate, so he tries to back off a little bit. He still calls me and asks me about stuff but he knows I have a lot going on so he doesn’t want to add any pressure that’s not needed. But never doubt that he’s been a huge impact on my life and basketball.”