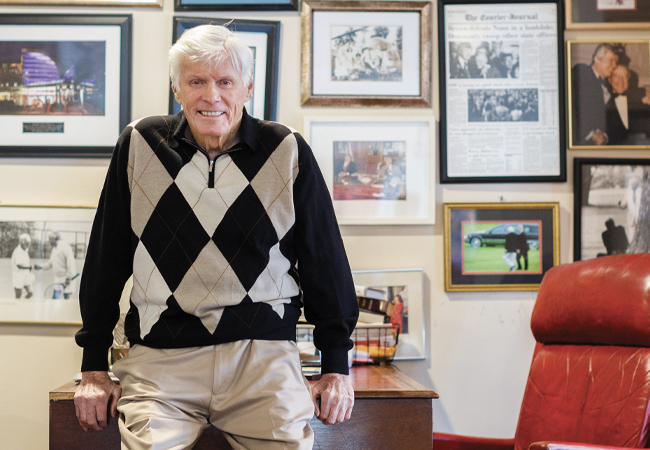 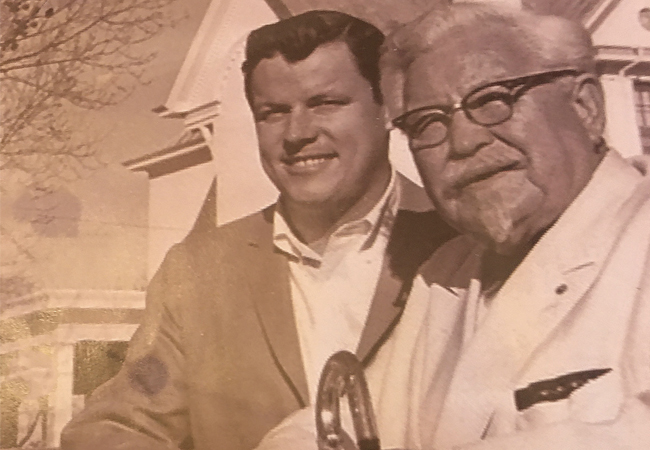 Attorney, governor, entrepreneur, philanthropist, father, heart attack survivor. The latter two identifiers are the most important to John Y. Brown, Jr. and he gives much credit to his son Lincoln and to his heart doctors.

“I am being honored by the American Heart Association for being bad,” he said. “I grew up in a generation that questioned jogging because you might hurt yourself. Not understanding foods, I ate what tastes good. I ate a lot of fried chicken and gravy, mayonnaise and butter, salt and sugar–all the things we learned would hurt you.”

While in office, in 1983, Gov. Brown had a quadruple bypass and was in the UK hospital for 30 days. He also developed ARDS, acute respiratory distress syndrome, a condition he was told only 37% of patients survived. “I had to fight to get off the respirator in time,” he said. “It was a touch-and-go situation throughout.”

He had a triple bypass in 1989 and after that he stopped both drinking and smoking, cold turkey, and turned his health life in the right direction. It was his young son Lincoln who inspired him. “He told me at an early age that his dad was a lot older than his friends’ dads and I had to be around a long time for him,” Gov. Brown said.

Now an entrepreneur himself, Lincoln Brown has spent most of the past decade building a successful business in California’s Silicon Valley. “There hasn’t been a week that Lincoln didn’t check in on me to encourage me to walk and eat healthy,” Gov. Brown said. “At my late age to have a son that cares that much, I’ve had to measure up to keep his respect. It is a reversal of family leadership.”

Gov. Brown is honored to be part of the American Heart Association’s annual celebration in March. His message is that it’s never too late to change. “I plan to ask a number of Lexington past leaders to stand up with me,” he said. “They all will be in their 80s and 90s. Great role models.”

Born and raised in Lexington, Gov. Brown studied arts and science at the UK and got his law degree there. He practiced a short time but had already discovered his acumen for business, starting with door-to-door sales. In the early 1950s while at UK he was hired by Encyclopedia Britannica and became a top salesman and area manager and was recognized for a national monthly area sales record. Brown said he was so anxious to prove himself that he sold five sets his first week, making $500.

“That gave me confidence and I learned how to judge people, to read people, how to communicate,” he said. “That training was the foundation that opened my future doors of opportunity.”

One day in the early ‘60s he got a call from Col. Harland Sanders, a commissioned Kentucky Colonel and restaurant owner in Corbin, Kentucky, who wanted to hire Brown as his company’s real estate lawyer. Brown wasn’t interested. Fast-forward a couple of months and they ran into each other at a Derby event.

"I didn’t know enough to know it couldn’t be done."

Feeling guilty for not following up, Brown soon stopped by to visit the Colonel and history was made. In 1964, Brown, with no money at the time, found a business partner, Jack Massey from Nashville, to finance purchasing the Colonel’s company, Kentucky Fried Chicken. Brown turned it into a global empire building 3,500 stores from scratch. “I didn’t know enough to know it couldn’t be done,” he said, citing the Colonel as being “the real deal. I ran the company but he WAS the company.” In the 1970s he sold his interest in KFC and owned several pro basketball teams, including the Boston Celtics, and personally funded the UK Sanders-Brown Center on Aging. Nationally noted for Alzheimer’s research, the center was founded to honor John Y. Brown, Sr.

John Y. Brown Jr. was elected Governor of Kentucky in 1979, coming off his honeymoon with Phyllis George in a late run. “I really enjoyed being governor,” he said. “I wasn’t a politician and we took politics out of Kentucky government. The Courier-Journal’s final editorial called our administration wholly honorable and effective in an unfavorable economy and said that we had the greatest cabinet in Kentucky history.” He added, “I simply hired people smarter than me.”

The Brown administration brought UPS to Louisville, and opened an economic development office in Japan that laid the foundation for Toyota coming to Georgetown in 1986 under Gov. Martha Layne Collins. Now it’s 2020 and Gov. Brown is enjoying this time of his life.

“I’m just a lucky guy,” he said. He is proud of all five of his children—John Y. Brown III, Eleanor, Sandra, Lincoln and Pamela— and 9 grandchildren. And yes, he keeps up with politics. His favorite reporter, hands down, is CNN’s senior White House correspondent. She also happens to be his daughter, Pamela Brown. “I watch her every day and cheer her on,” he said. “I’m a proud daddy.”

He remains good friends and is in close contact with their mothers, his ex-wives Ellie and Phyllis. Gov. Brown is quick to say that being grateful and staying positive, plus some exercising and eating right, all help him keep going at 86.

“I count my blessings every night,” he said. “I mean, gee whiz, what a life.”