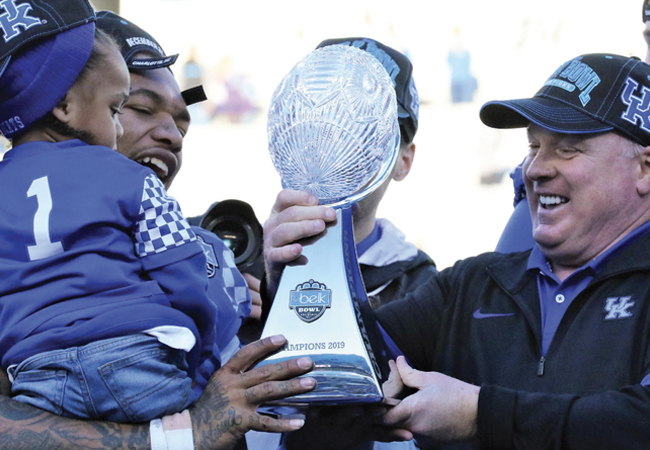 No one has to tell Kentucky coach Mark Stoops how different it will be not having Lynn Bowden on the UK football team next season.

"I don't know if you can replace a guy like this," Stoops said. "You have to get a bunch of good players around him and continue to develop the program."

That's what Stoops and UK have been doing and look to continue to do. After winning ten games in 2018, Kentucky finished 8-5 in 2019 despite significant personnel losses off the 2018 team and a season-ending injury to uarterback Terry Wilson in game two Bowden shifted from receiver to quarterback the last eight games and led UK to six wins and record-setting rushing totals for him and his offense.

Kentucky returns the majority of its starters and loses only eight scholarship players who were significant contributors to last season's succes. The Cats got a considerable boost when offensive tackle Landon Young and nose guard Quinton Bohanna both opted to stay at UK for their final seasons rather than put their names into the NFL draft. If that's not enough, the Cats put together their highest-ranked recruiting class that includes highly-regarded quarterback Joey Gatewood, a transfer from Auburn, and five-star Michigan lineman Justin Rogers.

"Let me be clear on this … we have some excellent dudes coming into this program," recruiting coordinator Vince Marrow said. "We've done a good job recruiting some kids nobody else really did and developing them into outstanding players. But you have to have the Jimmys and Joes and we have five-star, four-star guys coming now. We have some very, very high rated guys wanting to come every year now."

"We want to continue to build this program and take it to another level, so it's imperative to have a quality recruiting class like this one," the UK coach said.

Kentucky has won 32 games the last four years and been to four straight bowl games. The talent level is to the point that the Cats redshirted every freshman in 2019, something very few schools are ever able to do.

"It's not that those guys can't play," Marrow said. "We just didn't have to throw any of them in there like we did when we first got here. We have depth now. We played those guys, just not enough to burn their redshirt years, and you are going to see that freshman class has some bigtime guys in there."

The team will undoubtedly go into the 2020 season with a lot of buzz from the UK fan base because of what this team did. The Cats went from 2-3 with three quarterbacks hurt to 8-5 and perhaps the biggest storyline in college football with what Bowden did this year by rushing for 1,468 yards in eight games to lead the SEC in total yards and rushing yards per carry at 7.94. He ran for 13 touchdowns — and of course led that eight-minute, 85-yard drive that won the Belk Bowl on his touchdown pass to Josh Ali. CBSsports.com ranked the Belk Bowl as the best bowl of the college football season, and that should add to the excitement for the Cats going into next season.

Even with everyone knowing UK was going to run this year, the Cats gained 3,624 yards — most rushing yards in the Stoops era at UK — and ranked fourth nationally with 278.8 rushing yards per game. The Cats had four players rush for over 500 yards and average 5.5 yards per carry or more behind the Big Blue Wall built by offensive line coach John Schlarman.

"How can you not want to play for coach Schlarman?" Marrow said. "The last four years have been terrific and we are starting to get the credit now nationally that those guys deserve. That's how you build teams in the SEC with the offensive and defensive lines, and we have good guys coming back and hit a home run with the O-line and D-line in this recruiting class."

The defense, decimated by graduation losses going into the season, gave up just 168 passing yards per game—third in the country behind Clemson and Ohio State—and only nine passing touchdowns—tied for the nation's best mark. Kentucky had the SEC's fifth-best defense and gave up just four plays of 50 or more yards, the nation's fourthbest mark. Calvin Taylor and Jamar Watson combined for 15 sacks, the best one-two combo in the SEC, and Watson returns.

"We've got a lot of pieces coming back and added some guys that could be pieces of our team next year," Marrow said. "We still are not where we want to be, but we are getting there. We've climbed up the mountain but we're not at the top yet, and that's where we want to be."