UK Sports Leadership: It Starts at the Top 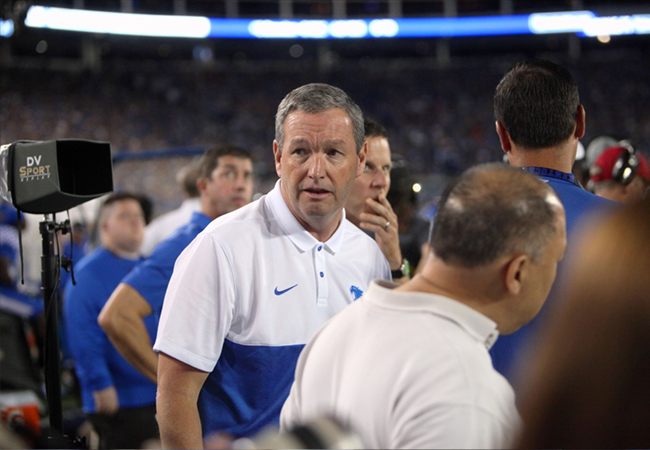 In 2008, the number 15 began to pop up on signs all over the UK athletic department. A retired number, perhaps? A tribute to a long-retired Wildcat who wore the same digits?

No. It was a commitment to excellence, a gauntlet thrown down by athletics director Mitch Barnhart.

Barnhart had overseen growth within his department in his first seven years. But he wanted a solid goal, something easy to remember for every coach, athlete and administrator on campus: 15 conference or national titles and a top-15 ranking for the department (not to mention an overall 3.0 GPA).

In 2008, the number 15 began to pop up on signs all over the UK athletic department. It was a commitment to excellence, a gauntlet thrown down by athletics director Mitch Barnhart.

UK athletics hit the target and in the five years since, has kept growing under the leadership of Barnhart. And for his efforts, he was named the 2019 national Athletic Director of the Year by Sports Business Journal.

Now in his 19th year, Barnhart has excelled at the two most visible criteria for an AD: facilities and coaching hires.

On his watch, UK has made dramatic improvements in its football stadium, golf house and track; built a sparkling, state-of-the-art baseball stadium; has plans for a major overhaul of Memorial Coliseum and built adjacent softball and soccer stadiums. The facilities price tag since 2007: $300 million and not a single dollar from Kentucky taxpayers or the University itself.

And then, there are the coaches.

Nick Mingione: national Coach of the Year and the school’s first NCAA regional baseball championship, in 2017.

And don’t forget Craig Skinner, whose volleyball team has won three-straight SEC crowns. Or Johan Cedergren: his men’s soccer team swept the Conference USA league and tournament titles last season. Both got their shot at the head coaching job at Kentucky thanks to Barnhart.

And now, with 15-by-15 behind it, UK athletics has a new mission: Elite 1-3-5. Barnhart wants each UK team to be No. 1 by winning a conference or national championship, sustain a department-wide 3.0 grade-point average and rank in the top five of the Learfield IMG Directors’ Cup standings by 2022.