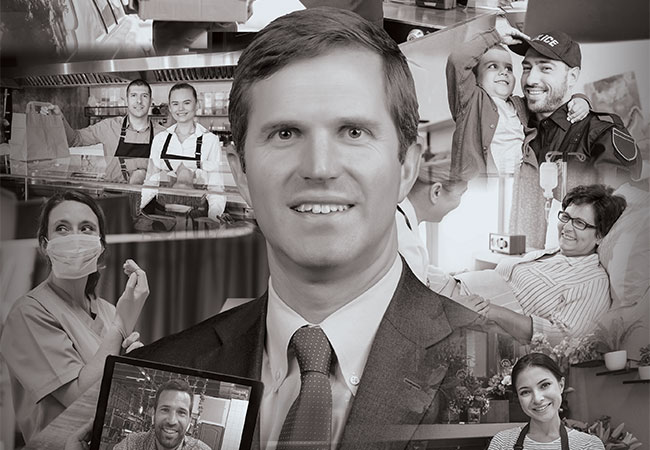 #TeamKentucky is our Commonwealth’s state-wide mission to “flatten the curve” of the spread of the coronavirus, an effort spearheaded by the calm and decisive leadership of newly-elected Kentucky Governor Andy Beshear. A graph circulating in the media updates daily with the number of confirmed coronavirus cases by date, plotting Kentucky’s numbers against Tennessee’s. Tennessee Governor Bill Lee was much slower to action and the data clearly bears that out in simple visual form.

Governor Beshear’s early actions to mobilize the state’s resources and the entire citizenry in the fight against this global pandemic have drawn both local praise and national recognition.  So much so that social media has sprouted proposed trades from various other states to lure Governor Beshear away: Florida has offered Disney World, Texas is willing to give up Matthew McConaughey, Maryland would hand over The Preakness.

Governor Beshear has been compared to both Franklin D. Roosevelt and Mr. Rogers for his extraordinary ability to inform and reassure the people of Kentucky.

The internet loves our governor. He has inspired the Facebook Group “Andy Beshear memes for social distancing teens” that, as of press time, has nearly 150,000 members. (Kenneth and Virginia have been given the meme treatment, and have become household names in their own right!) Governor Beshear has been compared to both Franklin D. Roosevelt and Mr. Rogers for his extraordinary ability to inform and reassure the people of Kentucky.

#BeerWithBeshear photos pop up each day on social media as “Andy Hour” draws near. But rest assured that Governor Beshear takes his duties seriously and soberly as he guides Kentuckians through the maze of confusion and fear that could otherwise threaten to overwhelm us.