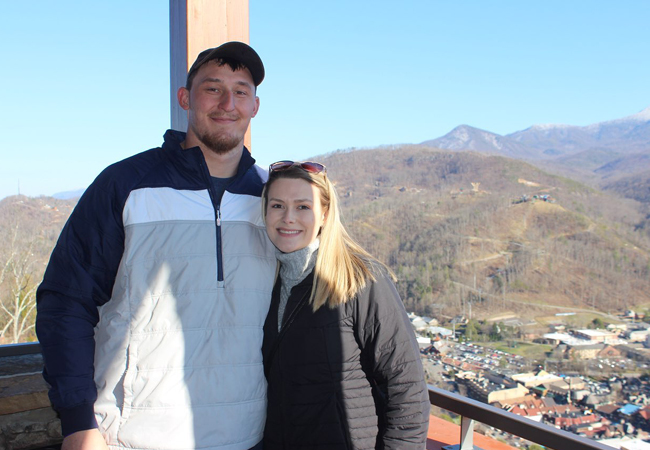 Haleigh Johnson considers herself a “sneaky” person who is good at finding out things. Yet when Kentucky offensive tackle Landon Young asked her to marry him during a weekend getaway in Gatlinburg, she was caught off guard.

“Landon must have prayed to God I did not look at his phone or go through his stuff,” said Johnson.

What made the surprise even more dramatic was that her parents and Young’s parents were also on the trip and nobody told her.

“Landon said they were handing the (engagement) ring off all day to keep me from seeing it. My mom and his mom went to the bathroom to trade the ring to give it back to him, and I walked in. He said they about freaked out, but I didn’t catch on to anything. I am sneaky, but not sneaky enough to catch him,” she said.

They met in class at UK, and she had no idea he was a star football player. Once she found out he not only played but was a starter, she apologized to him for thinking he might have been “someone who just stood around” during games.

Johnson is from Floyd County in eastern Kentucky, went to Pikeville High School, graduated from UK a year ago, and works as an administrative assistant for the Kentucky Center for Agriculture and Rural Development. Young went to Lafayette High School in Lexington and likely will be an NFL draft pick after his final year at UK next season.

“It was definitely love at first sight. I didn’t know he was trying to hit on me in class at first. I thought he was just messing around. He would poke at me, do the typical things boys do to flirt. He did it to a couple of other friends in class, but he told me he had to do that not to make it that obvious he was flirting with me. He plans stuff too much at times,” Johnson said.

“We will either get married in the place we planned or in somebody’s backyard or somewhere,” she said. “We are definitely getting married that day. I just never thought I would end up with somebody that so many people talk about. Everybody loves Landon, but that’s okay because I do, too.”

She had anticipated he might ask her to marry him at Kroger Field before or after a UK game with 50,000 or more fans watching. She was fine only having 30 to 40 watching in Gatlinburg after they rode a chair lift to Gatlinburg SkyBridge.

“I knew I would say yes no matter where he proposed, even if I was in shock,” she said. “I don’t think he was ever worried about me saying yes. The bad thing is I really don’t know if I actually ever said yes. I just stuck my hand out (for the ring), and he said, ‘Is that a yes?’”