Remembering the Many Roles of Phyllis George 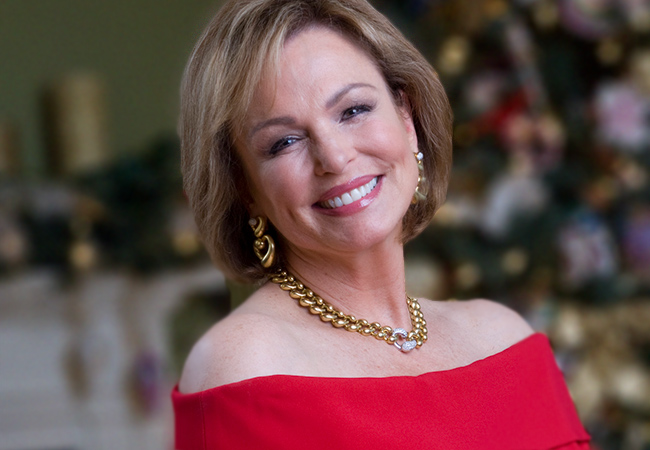 Few women leave such an indelible mark on whatever they touch as Phyllis George.

Born in Denton, Texas, Phyllis was crowned Miss Texas in 1970 and went on to become Miss America 1971. She traveled to Vietnam with other Miss America contestants for a 22-day USO tour for American troops. She served as a long time member of the Miss America Organization Board of Directors.

Phyllis joined The NFL Today in 1975, making her one of the first women to have such a prominent, national role in sports coverage.

After a brief stint as the host of Candid Camera, Phyllis was approached by CBS Sports producers about becoming a sportscaster. She joined The NFL Today in 1975, making her one of the first women to have such a prominent, national role in sports coverage. Working alongside Brent Musburger, Irv Cross and Jimmy the Greek, Phyllis was known for her interviews with players.

When criticisms came that her credentials didn’t suit the job, she said she knew plenty to get by. “I’m from Texas, and down there, you follow the Texas Longhorns and the Dallas Cowboys or you don’t belong,” she told People Magazine in 1976.

Musburger tweeted, “Phyllis didn’t receive nearly enough credit for opening the sports broadcasting door for the dozens of talented women who took her lead and soared.”

From the CBS Morning News to The Muppet Show, horse racing to talk shows, Phyllis graced the airwaves countless times throughout her career. In 1994, she hosted her own prime-time talk show, A Phyllis George Special, where she interviewed then-president Bill Clinton.

“Phyllis was a great asset to Kentucky,” the former governor said to the Louisville Courier-Journal. “We had a great partnership. I think we enjoyed every single day.”

During her time as First Lady, Phyllis helped raise funds to renovate the Governor’s Manion in Frankfort, which was aging badly. She oversaw its restoration. She also worked to promote Kentucky arts and crafts. She got Bloomingdale’s to sell Kentucky-made products. In 1981, she founded the Kentucky Museum of Art and Craft in Louisville to build interest in the state’s craft heritage.

On top of those many roles, Phyllis was a businesswoman. She founded two companies in the course of her career, Chicken by George and Phyllis George Beauty. She also wrote or co-authored five books. She was a founding member of the Henry Clay Center for Statesmanship.

We featured Phyllis George on the cover of our February-March 2008 issue of TOPS in Lexington. She spoke of her home life and shared with our interviewer about caring for her mother, who was struggling with and would eventually succumb to Alzheimer’s. She was named an Alzheimer’s Champion by the national Alzheimer’s Association and was presented with the Rita Hayworth Alzheimer’s Award for her advocacy. Phyllis also presented the Phyllis George Outstanding Caregiver and Advocacy Award in honor of her mother and best friend, Louise George.

Phyllis always believed that one of the most important roles in her life was that of mother to CNN White House Correspondent Pamela Ashley Brown and Lincoln Tyler George Brown. She also cherished her role as a grandmother.

Family friend Wolf Blitzer read this statement from her children on air: “For many, Mom was known by her incredible accomplishments as a pioneering female sportscaster, 50th Miss America and First Lady. But this was all before we were born, and never how we viewed mom. To us, she was the most incredible mother we could ever ask for and it is all of the defining qualities the public never saw, especially against the winds of adversity that symbolize how extraordinary she is more than anything else. The beauty so many recognized on the outside was only a mere fraction of the internal beauty, only to be outdone by an unwavering spirit that allowed her to persevere against all the odds.”

What many people did not know was that Phyllis battled Polycythemia vera for much of her life. Phyllis was diagnosed with this rare, progressive blood cancer some 35 years ago. Phyllis passed away from complications from the disorder on May 14, 2020 at the age of 70. •