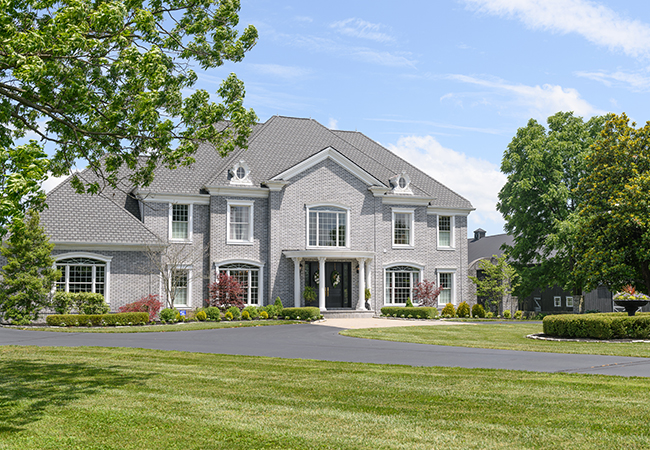 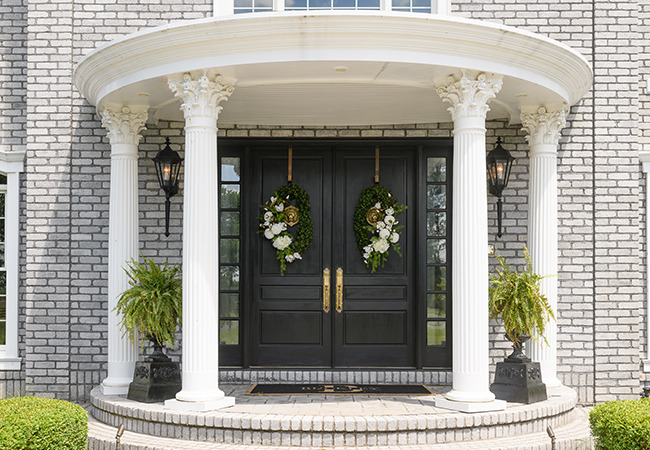 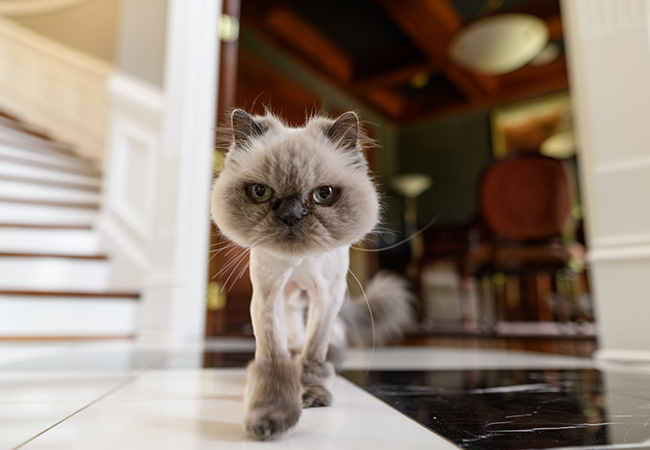 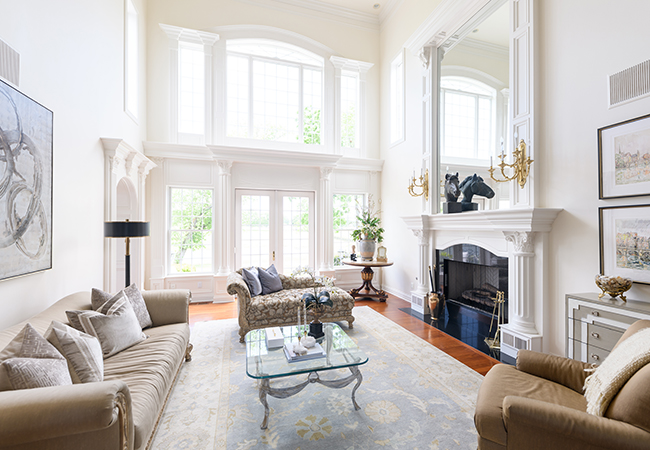 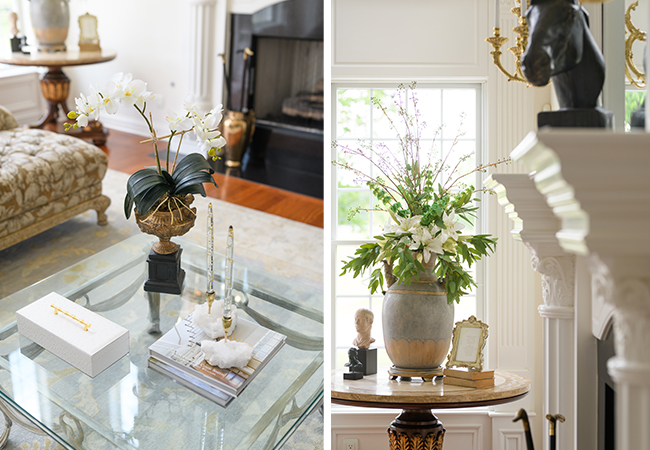 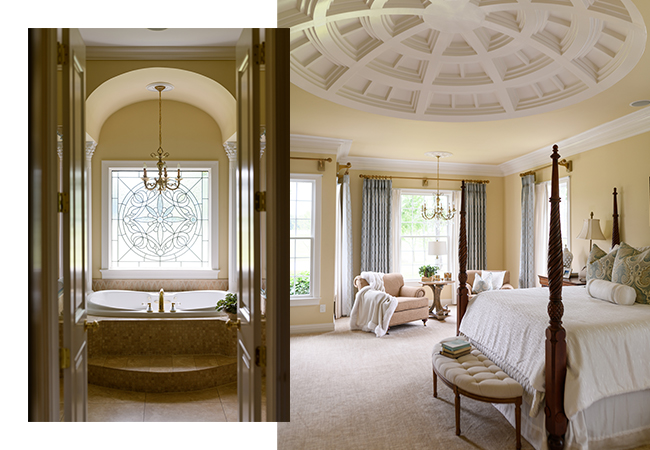 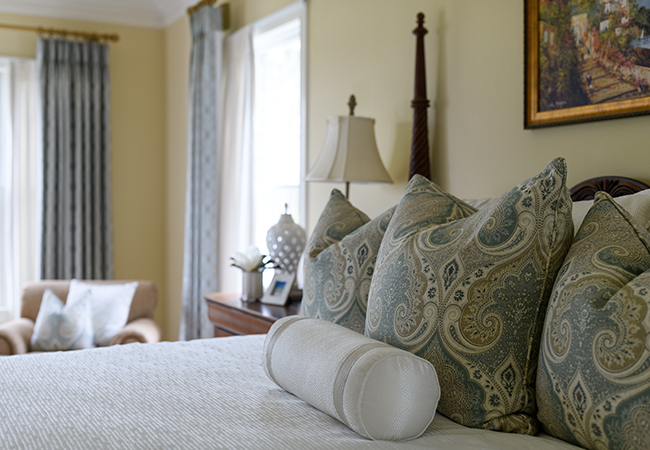 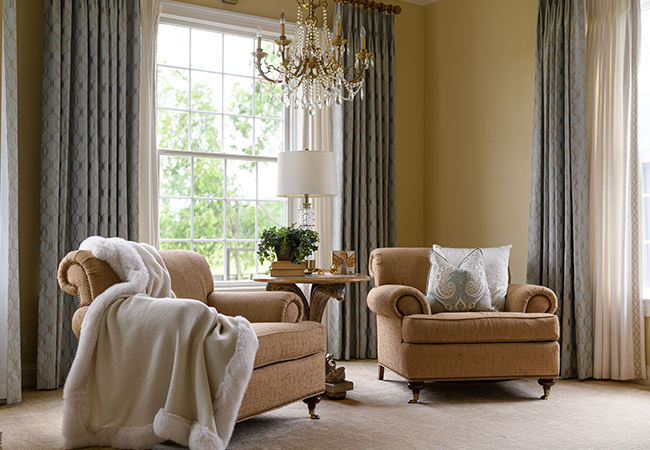 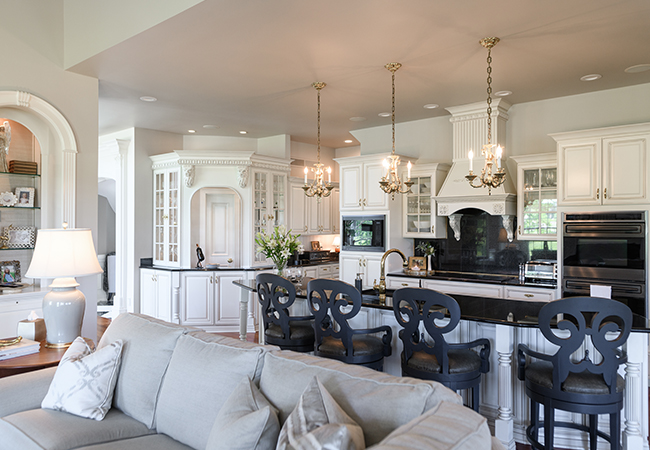 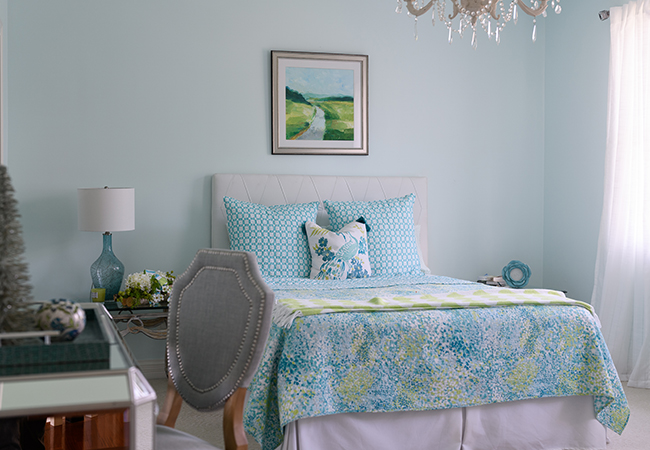 When Kelly and Judy Buckley envisioned their dream home, they saw a large home positioned on an expansive piece of property, where they could spend time with their children and grandchildren. Both homeowners grew up on a farm. In fact, Judy’s grandparents’ farm was located where Edythe J. Hayes Middle School sits today, and the 200-year-old home is still located on the property! The couple stumbled upon the home by accident and immediately fell in love with its peaceful surrounding. Originally built in 2006, Greystone Manor won the Parade of Homes that same year.

The Buckleys knew they needed help transitioning the original interior to reflect their own style and personality. So, they called upon Dwayne Anderson of House by JSD Designs. Judy works at House and has always loved Dwayne’s clean, classic and comfortable style. According to Dwayne, “The Buckleys are not fancy people. Their style is traditional, but not overly done. Since the original color palette throughout the home was red, black and lots of gilded gold, the goal was to pull it down.”  Rather than change everything, Dwayne worked with the Buckleys to keep certain distinctive pieces like the elegant doorknobs, gold hardware and elaborate chandeliers. By toning down the color of the walls and adding layers of neutral textures and patterns, everything began to work together.

Upon entering the grand foyer, one’s eyes are immediately greeted with the home’s original checkered marble floor, a detail the homeowners kept because of its unique interest. Dwayne recommended painting the banister in black lacquer to tie in with the flooring and to naturally carry one’s gaze up the winding stairs to the beautifully designed dome ceiling with intricate Jeffersonian inspired architecture and gorgeous gold chandelier.

The table was a piece that Judy purchased from an estate sale for her previous home. The style was perfect for the new home, but with a dated red mahogany finish. Dwayne enlisted the help of Vince and Casey Murray, master painters, who helped the couple transform several pieces and rooms throughout the home. The Murray’s painted the table a shiny black lacquer and finished the top with a textured crocodile pattern, all with an intricate gold ribbon border. The ottoman below is also from their previous home but reupholstered in a neutral print fabric that mirrors the tabletop’s crocodile texture. Dwayne accessorized the table with florals, table lamps and a mirror, all from his store on Industry Road.

The home office, located to the right of the foyer, was Dwayne’s opportunity to convince Judy of welcoming a masculine black room into the home. Coffered ceilings, built in bookshelves, a chair rail, and cherry flooring give the room a sense of warmth. The walls are covered in a black cork wallpaper, giving the room even more texture and dimension. The painting is from Interior Yardage.

The master bedroom is surrounded by five large windows, allowing plenty of natural light to pour into the room. Painted in a light buttercream, the walls have delicate gold speckles that glisten with the sunlight. Dwayne had custom draperies made from material found at the Rag Peddler. The homeowners did not want blinds, so Dwayne had a second lighter layer of drapery made that can be pulled shut for privacy. A domed ceiling, similar to the one in the foyer, gives the room the grand traditional style the homeowners have come to love. A cozy sitting area is defined by a beautiful mini chandelier and two armchairs, perfect for a morning coffee, or a nighttime book.  The carpeting is from Mathis Carpets.

The dining room’s ceiling was painted a deep black to beautifully offset the white molding and crystal chandelier. The Buckleys friendly cat, Oasis, can be found meandering around the home and welcoming guests upon arrival.

The molding and woodwork are the focal point of the two-story living room. Dwayne explained that this room is the perfect example of using restraint and allowing the room to breathe. Rather than incorporating drapery, they opted to expose every inch of the windows, and add elements of texture elsewhere in the room with fabric, accent pieces and artwork. A view of the pond and fountain are visible through the French doors.

Most of the Buckley’s time is spent in the kitchen, which is open to the breakfast and family rooms. The space offers a panoramic view of the pond and barn out back! This section of the home is where family and guests gather for holidays and celebrations. During Christmas, the couple hosts 30 family members, sometimes wearing matching pajamas.

Like the rest of the home, the walls were originally painted red. Once repainted in Benjamin Moore’s Revere Pewter, the entire space felt calmer, and more welcoming. The bar stools and dining chairs were left with the home. Originally finished in glossy black, Dwayne reimagined them and reached out to Ray Gilker to refinish them in soft gray/black, before Dwayne had them reupholstered in faux leather and cream-colored tweed performance fabric, respectively.

A sectional couch offers plenty of seating for a cozy night by the fire or a movie night with the grandchildren. The accent chair is upholstered in a cheetah fabric.

The breakfast area is surrounded by two sets of French doors, allowing easy access to the covered patio. The dining table was from the Buckley’s previous home, but the side table was a bargain buy that Judy made without consulting with Dwayne first! When he initially saw it, he could not fathom using it in the home. But the size was perfect for the space, so he called Vince Murray and asked for help. “You would never know it’s the same piece,” said Dwayne. “It was originally farm country, finished in a distressed white. Vince dressed it up by replacing the glass panes with mirrored glass. He painted the top and the trim in mixed metal metallic, and the rest of the piece in a lighter textured grey.”  The piece is perfect against the Thibaut textured wall covering.

Judy and Kelly welcome their two granddaughters to the house often. It was important to Judy that her granddaughters feel at home, so she turned two of the three upstairs bedrooms into their own. Charlee Mae (6) has her very own pink tent, where she and her sister play and read books. Connected by a Jack and Jill bathroom, Piper’s (2) room is decorated in soft teal and green. A crib and changing table sit on one side, and a big girl bed on the other, ready for her as she gets older.

The finished walk-out basement had a small stage built in one of the rooms. It gave Judy the idea of turning the entire room into a playroom for Charlee Mae and Piper. Vince Murray took the original red curtain painting on the wall and extended it to span the entire width of the room. He added a sign with the girls’ names on it and voilá, instant fun for years to come. On the opposite side of the room, a fancy playhouse is decked out with windows, a pink front door, and matching bunkbeds inside for endless hours of playtime and imagination.

The home offers two stories of outdoor living.  The basement’s exterior doors lead to a large firepit just steps away from the pond. On pleasant evenings, the Buckley’s love roasting marshmallows with their granddaughters or sharing stories with friends. Just above, the covered patio off the kitchen and breakfast room offer a shaded reprieve for morning coffee, casual dinner, or a relaxing evening of peace and quiet. The view never gets old.