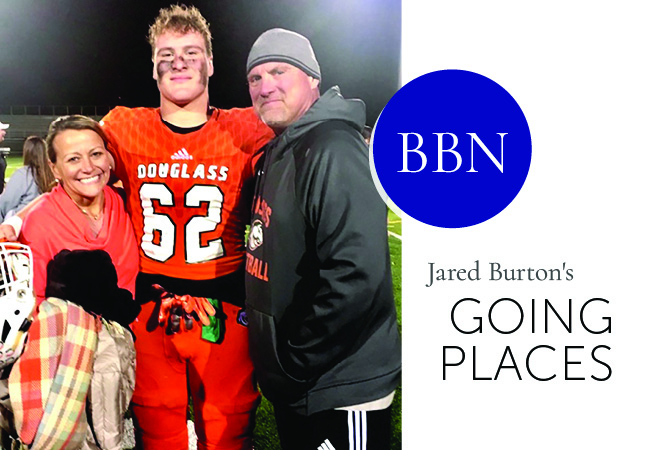 The new normal for Jager Burton is to get asked daily about where he’s going to play college football.

“If I go out in Lexington, people will ask me questions,” said Burton, an offensive lineman at Frederick Douglas High School in Lexington and the state’s top-rated player in the 2021 recruiting class. “If I am with family or friends, that’s usually the first question I get. It’s just kind of normal now.”

The 6-4, 275-pound Burton has had a final five of Kentucky, Ohio State, Oregon, Alabama and Clemson. He originally planned to make his college decision on August 24, his 18th birthday. He said a few weeks ago the date could change but only if he had “no idea” where he wants to go.

Because of COVID-19, Burton has not been able to take any official visits—something he definitely wanted to do before making his college choice, even though he had made several unofficial visits.

However, in late June, he decided he would wait a bit longer to make his college choice.

"I have stayed as productive as possible and done stuff to stay focused on football that also takes my mind off recruiting some.”
- Jared Burton

“I will be pushing my commitment back from August 24. I want to weigh all my options and take all five of my official visits to make the best possible decision for my family and me,” Burton, a top 150 player nationally, said. “I would have gotten all my officials done in June, so it was definitely frustrating that I couldn’t do that.

Not being able to take visits has led to some hectic times. He’s happy fans follow his recruitment and care enough to ask about it. However, he’s also had a hard time finding “private” time, and when he does, he might get a call from a college coach. Frederick Douglas coach Nathan McPeek said his star lineman was “bombarded” by calls at times from coaches and media.

“The coaches have been bored just like players because there was nothing to do,” Burton said. “They (coaches) would just blow up my phone wanting to set up (virtual) meetings.”

His parents, Teresa and Jeff Burton had to encourage him to set limits for when he would take phone calls from coaches.

“For us, it has been mostly trying to be an encourager without being an influencer of what we might like to happen,” Teresa Burton said. “He’s 17 years old, and sometimes decision making is not the best at that age, but from the start, he’s had a list of things he wants in a college. We are just along for the journey and hoping he can take his official visits, and that will give him more clarity.”

Jager Burton continued to work out daily despite the COVID-19 restrictions. Often he joined former Frederick Douglas teammate Walker Parks, a 2020 Clemson signee, and did the same workout Clemson coaches had sent him. He’s even worked out some with UK senior center Drake Jackson.

“I have stayed as productive as possible and done stuff to stay focused on football that also takes my mind off recruiting some,” Burton said, he has accepted an invitation to play in the prestigious
All-American Bowl January 9 in San Antonio.

What he hasn’t done is give anyone any indication where he might be leaning college-wise. That likely won’t happen before his commitment date, either, whenever that now turns out to be.

“My parents are kind of like me. They don’t say much about it. We keep our conversations about recruiting private,” Burton said. “We are not going to be very vocal about what I am thinking. I don’t want anyone except me to know where I am going until I announce it.”