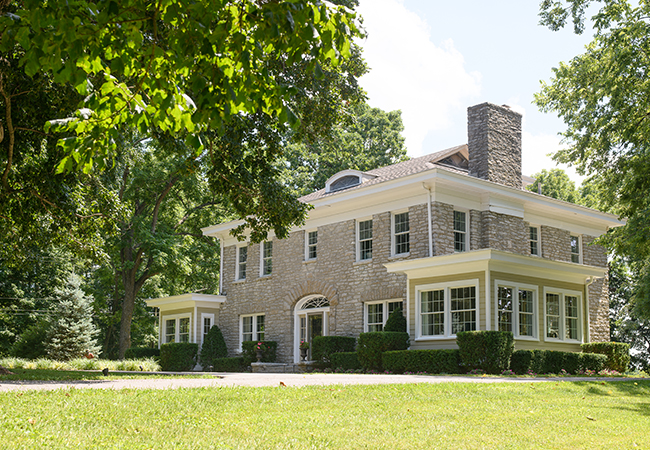 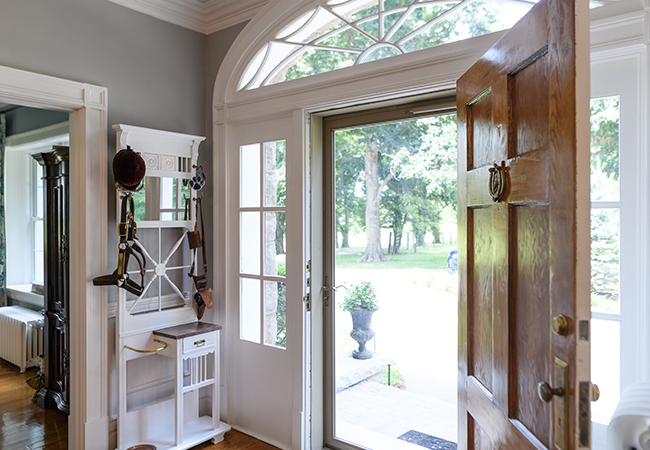 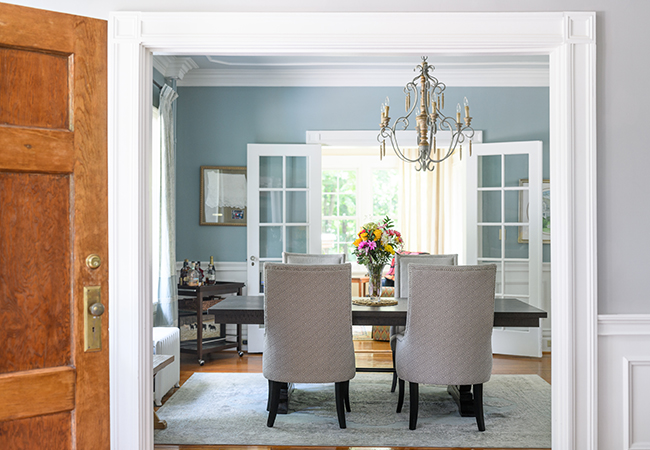 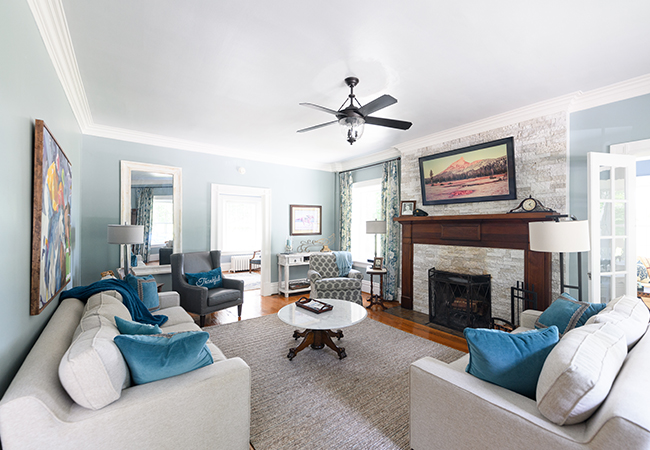 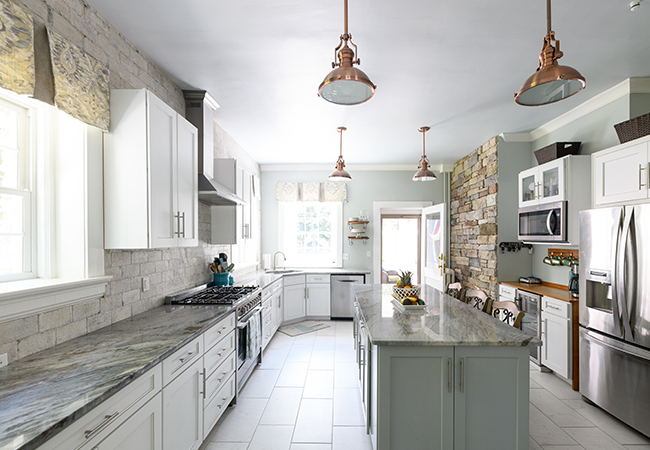 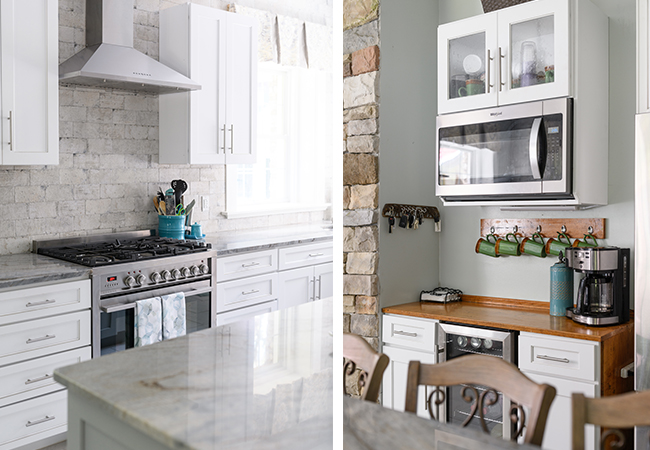 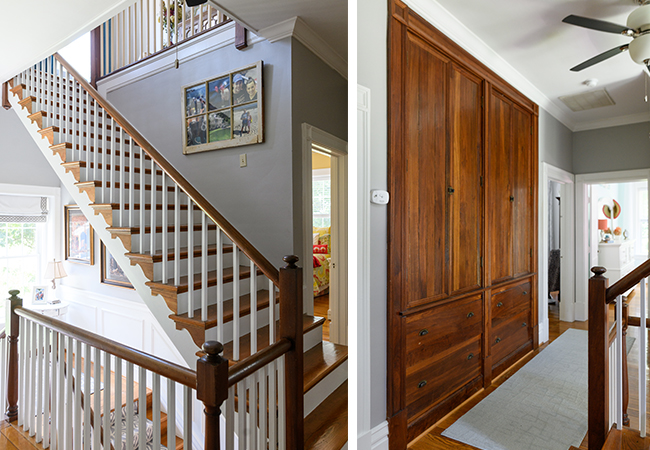 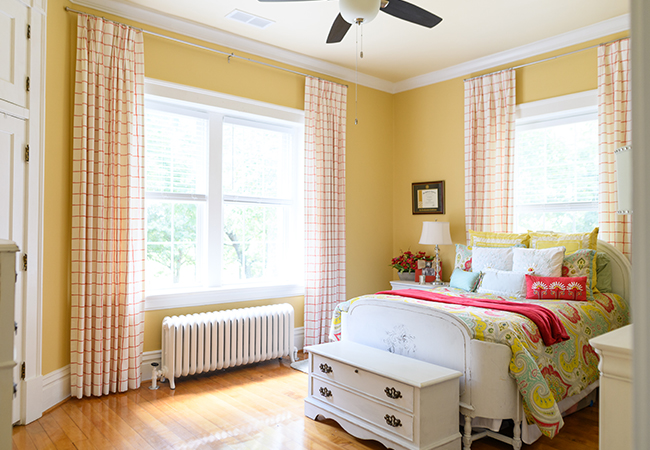 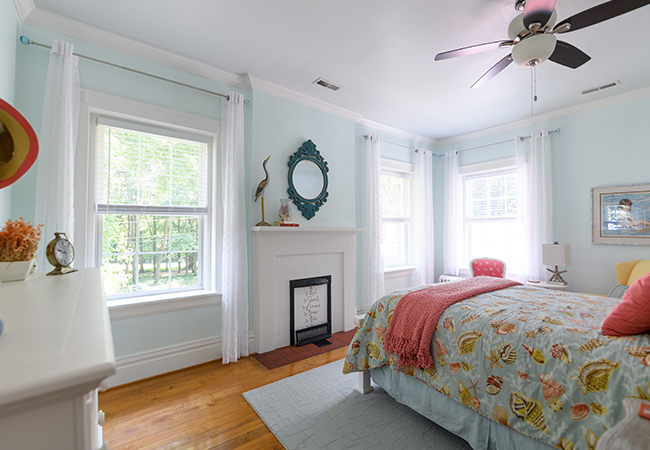 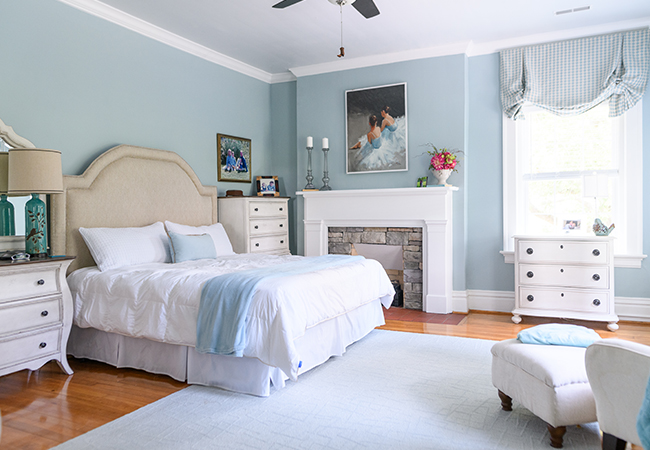 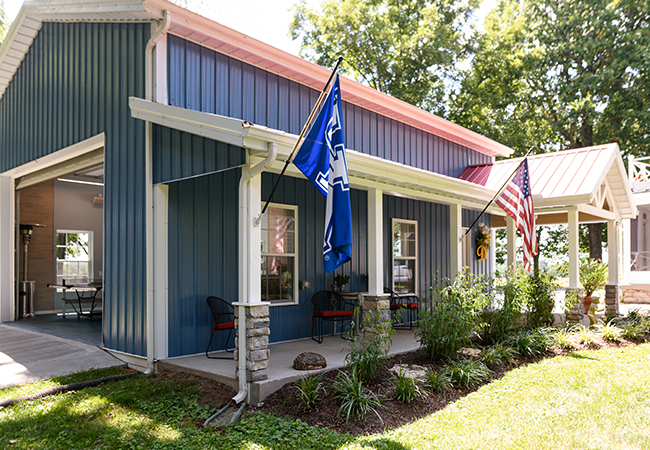 Ask Pam Denham what she loves most about the home she shares with her husband Dave and their two pomapoos, Rusty and Doodles, and she’ll tell you it’s the cows in her back yard and the horses in her front yard. She’s only half joking.  The 10-acre property on Military Pike, situated near the point where Fayette, Woodford and Jessamine counties merge, is a bucolic oasis if ever there was one.

The Denhams’ property is adjacent to White Farm, with which they share a driveway easement, and across the road from Shadwell Thoroughbred Farm – hence the cows and horses.  “I can literally see cows out my back windows and horses out my front,” she laughs.

On a more nostalgic note, Pam recalls fondly how the house she grew up in here in Lexington was stone, so the building’s thick limestone walls were a bonus.  They proved to be more than aesthetically pleasing, as the eight-inch exterior walls provide insulation against the extremes of Kentucky’s notoriously fickle weather.

The couple’s love affair with the house was consummated in the spring of 2018 when they purchased it from Greg and Emily Harkenrider.  You know the saying “the course of true love never runs smooth” and that sentiment applies to home owning too.

The Denhams loved their new house and appreciated the TLC the previous owners had bestowed upon it.  Nevertheless, they wanted to imprint it with their own stamp.  They started by adding the circular driveway in front of the house, which served to enhance its regal façade.

Once that was completed, they set about remodeling the house to suit their own taste and style, while at the same time, keeping intact the integrity of the 99-year-old Georgian-style house (a keystone over the front door has 1921, the year the house was built, carved into it).

Lexington native Pam, and Dave, who is from Middlesboro, own Hometown Manor Assisted Living Facilities, and having flipped some 50 properties, are experienced designers. The couple decided to trust their own judgment and skill designing and decorating the 4,000-square-foot, five-bedroom, three-bathroom house.

However, one company they did make use of was Lexington Building Supply. “Over a period of six months, with their help, we removed and replaced literally every window and door slider in the house,” says Pam.  “It was quite a project as there are 54 of them.”

Next up was taking out the door separating the kitchen and dining room to take advantage of the view, as well as removing much of the stained glass that had been put in by the previous owners. “They had stained glass all throughout the house, including an upstairs chapel,” says Pam. While she says it was beautiful, she allows that it wasn’t their style. “It really was exquisite, so we did keep one panel in the door of what now serves as our study/office,” she adds.

Pam and Dave love to entertain, so much of the design revolved around the kitchen. The faux stone on one wall was chosen to match the stone in the mirroring sunrooms on each side of the house. For this project, the couple chose Stonemasters in Georgetown, which also provided stone for the master bedroom as well as the outdoor fire pit and barn.

The colorful Italian porcelain tile on the kitchen wall came from Louisville Tile on Palumbo Drive and the aqua marble tops for the kitchen island from Stone Gallery. Of special interest to Pam is the 36-inch stove, which she says, “is a first for me.”

Traditional craftsmanship can be found throughout the house, from the original hardwood floors to the built-in cabinetry, bookshelves and fireplace mantles, as well as the original eyebrow window over the front door.

One of the couple’s favorite objects is the original mirror with Art Deco trim in the downstairs bathroom, whose previous function had been as a butler’s pantry. In addition, all three of the original fireplaces in the house are in working order, says Pam. She goes on to say that the previous owners weren’t aware that they were functional, but when she had them inspected, she discovered they were clay-lined and ready to be lit.

While the Denhams pride themselves on having kept what was best about their remarkable house, they have also added their own personal touch. Interior Yardage did all the drapes, while the worsted wool carpet on the stairway came from Pro Source. “When we bought the carpet, I learned that it was so soft because the wool came from the first shearing of the sheep,” explains Pam.

The equestrian painting over the living room sofa was purchased from their friend and former neighbor, prominent Lexingtonian Jim Host. The beautiful cherry breakfront in the hallway once belonged to Dave’s parents. A lace tablecloth that was handmade for Pam by her grandmother has been mounted and framed and serves as a piece of art in the dining room.

Displayed in an upstairs bedroom are the sports trophies won by their daughter Lauren, a senior at the University of Kentucky and a member of the swim team; their son Bart, a lawyer, lives just a few miles away.

One of the most beautiful rooms in the house is the upstairs master bedroom.  Done in shades of sky blue and white, it boasts one of the three fireplaces, converted by the Denhams from log-burning to electric. “It’s much easier to just flick a switch and have a cozy fire,” says Pam.

Another bedroom, which serves as a guest room, could come straight from a Coastal Living Magazine cover.  Nautical touches in the bed spread, lamp and wall design give it a casual, breezy beach vibe.

Indeed, the color palette of white, sky blue and soft gray continued through every room which gives the house a calm, restful feel. “I’m big on painting everything white,” laughs Pam.  “Dave usually indulges me, but he put his foot down when I wanted to paint the wood on the door of the faux closet in the upstairs hallway white.” Dave prevailed and the closet door remains the color of its original wood. “I’m not sure exactly what kind of wood it is,” he admits, “but I do know that there is quite a bit of oak, ash, hickory, cherry and cedar used in the house, so it must be one of them.”

Among the other things the Denhams love about their dream home is the second story balcony providing a vista of the pastoral landscape; a veritable forest of mature trees on the property, and the barn located just to the rear of the house.

Wait…..the barn?  You’re probably thinking – a barn is just a barn, isn’t it?  Well, not this one.  This barn serves as Pam and Dave’s entertainment venue of choice for soirees ranging from sit-down dinners for intimate friends where the guest list may number six to eight to a full-on shindig for the UK swim team where the guest list may number 50 or more. Pam designed the barn, but she fully credits the Amish workmen at Caudill Trusses in Mt. Sterling for bringing it to life. “We love it,” say both Pam and Dave. “We use it pretty much all year long.”