Hall Monitor '78: a Conversation with Joe B. Hall 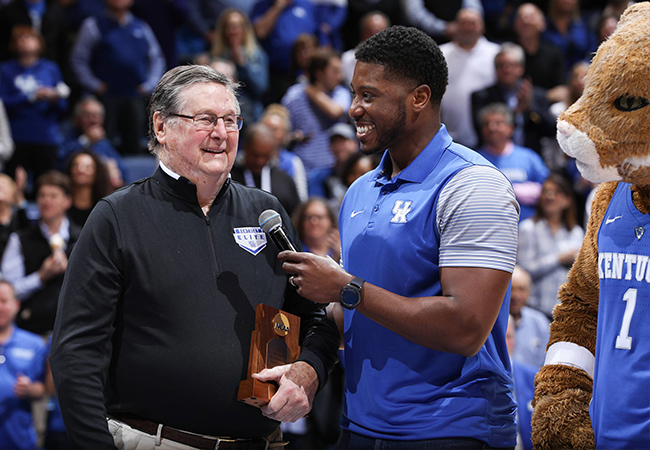 As we long for happier times, it’s easy for Kentucky basketball fans to allow themselves to drift back to unfettered joy—such as an NCAA championship.

Listen in to a conversation I had with Joe B. Hall, sitting in his backyard prior to the 10-year reunion of his 1978 title team, as he remembered his players. (Note: Hall couldn’t make the dinner for health reasons. His comments were shared that night with the players, but no one else has seen them—until now).

“You talk about cool,” Hall said, “somebody with ice water in his veins—Jack was cool from the time he stepped on the floor as a freshman.” The 41 points Givens scored in the title game against Duke, “just put the icing on his career.”

After pro ball, Givens spent more than 20 years in broadcasting and now works in telecommunications.

After his pro career, Macy went on to coaching and broadcasting.

The 6-foot-11 post man had an eclectic array of skills that betrayed his size. “He had a good attitude, not just with his teammates but his opponents,” Hall said. “He’d help somebody up that he just knocked down.”

Robey played eight seasons in the NBA, winning a championship with the 1981 Boston Celtics.  After retirement, he became a real estate broker.

A rugged rebounder and defender, Williams “was almost unstoppable around that basket,” Hall said.

Since then, Williams has become an accomplished artist and has been teaching at a middle school in Lexington.

Along with Robey, he was one of the original “Twin Towers” and also contributed more than sheer brawn.

“He had a great shooting touch,” Hall said. “He was fearless, a very courageous player.  He had a lot of guts and a lot of determination.”

Phillips had a successful pro career overseas.  Sadly, he died in 2015 of injuries he suffered in a fall at his home in Madisonville.

He became the “Blond Bomber” as a freshman because of his bleached hair; in ’78 he’d returned to his natural, darker blond but the deadly outside shot remained intact. “It didn’t take him three games to win the admiration of the fans,” Hall said. “He was constant motion.”

The reserve guard “was one of the finest young men ever to play at the University of Kentucky,” said Hall. “I couldn’t say enough good about Dwane Casey.”

Casey is now head coach of the NBA’s Detroit Pistons.

Possessed of one of the purest shooting forms UK fans have ever seen, Claytor was “a scrapper,” Hall said. “He was a competitor and he didn’t back down.”

After a couple of seasons in the CBA, Claytor became a licensed chemical-dependency counselor, working with mostly troubled adolescents. And for the past 26 seasons, he’s been a high school basketball referee in his home state of Ohio.

Power personified, Lee thrilled UK fans with his power dunks, including one that capped the NCAA title.

“There couldn’t have been a more fitting climax for the national championship for that group,” Hall said, “than for James Lee to make that dunk at the end of the game.”

After basketball, Lee spent time working for UPS and now has retired to his hometown of Lexington.

Like Williams, Cowan was a reserve forward.  “He had a great learning experience, playing with Givens and Lee,” Hall said. “He took a lot of knocks in practice but he hung in there.”

Cowan also played professionally overseas and went on to open a print shop in Hopkinsville.

Hall by the Numbers

1 and Only: Hall is the only man to play on and coach a NCAA Championship team for the same school.

5th: Hall led the cats to their 5th title win at the 1978 NCAA Championship.

To learn more about Hall, check out Coach Hall: My Life On and Off the Court, his 2019 memoir written with Marianne Walker published through University Press of Kentucky.