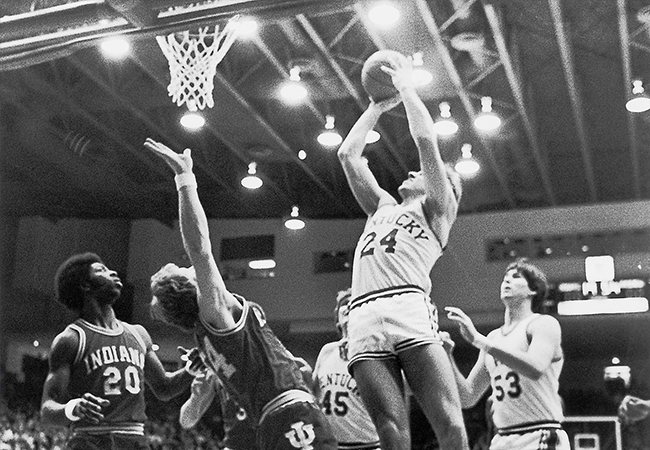 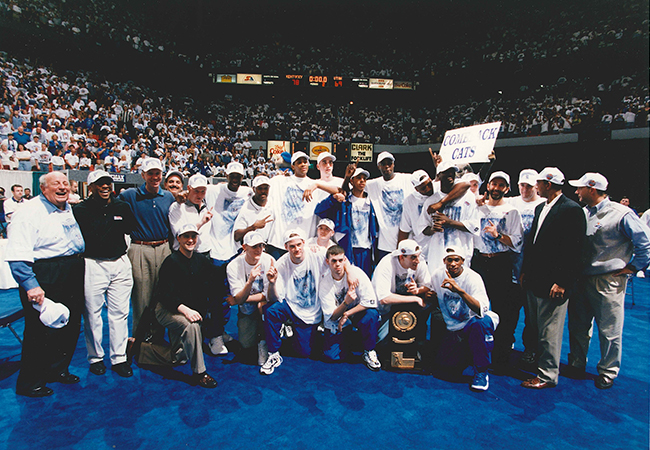 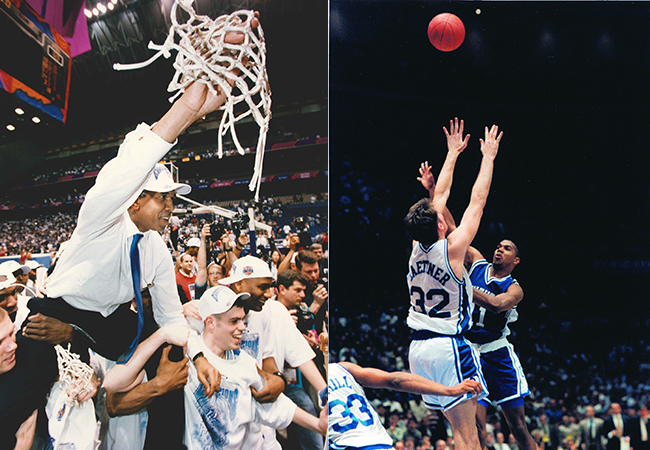 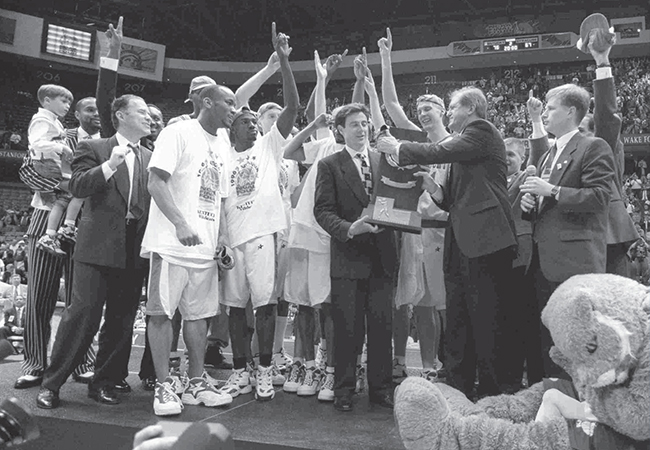 Picking out the top 10 throwback moments from the 1970s, 80s and 90s for the University of Kentucky sports seems easy because there were many great achievements in those three decades. But having so many to choose from always makes it hard to pick a top 10.

After consulting with fans on social media, talking to various long-time UK media members and refreshing my memory, here's my top 10 in chronological order.

For many older Kentucky fans, there's never been a more iconic moment than the 1975 NCAA Tournament when the Cats beat No. 1 and unbeaten Indiana 92-90 in the regional final in Dayton, Ohio, to advance to the Final Four.

Indiana had pummeled UK earlier in the season, but this time the Cats matched the physical play and got 22 points from former Indiana Mr. Basketball Doug Flynn—the only time he led UK in scoring all season.

Coach Joe Hall mentioned on his postgame radio interview with Cawood Ledford he had told his team it could celebrate in Memorial Coliseum when the players got back to Lexington. Word spread, and when UK's bus crossed the Ohio River, Kentucky State Police cars were waiting to escort the team. Kentucky fans stood on Interstate 75 overpasses with signs for the Cats. Fans lined up along fence rows to cheer for the team. Crowds just kept increasing the closer the team got to Lexington.

Hall called it the "greatest" celebration a team could have.

Before Kentucky won 10 games in 2018, the last time UK won 10 games was 1977. The Cats outscored opponents 252-111 and finished 6th in the final AP poll but were not bowl eligible due to NCAA probation.

Kentucky won 24-20 at Penn State (it's second straight year to beat Penn State), won 33-0 at Georgia with Prince Charles watching, won 33-13 at LSU and won 14-7 at Florida. The Cats also beat Tennessee 21-17 when backup quarterback Mike Deaton completed a 36-yard pass to Felix Wilson before starter Derrick Ramsey, who could not throw because of an arm injury, came back in to lead UK to the winning touchdown in the
21-17 victory. The only loss was 21-6 at Baylor in game two.

The defense was led by All-American defensive end Art Still and six players off that team—Still, Ramsey, Mike Martin, Will Grant, Dallas Owens and Jerry
Blanton—were picked in the 1978 NFL draft.

Headline from Kentucky's 94-88 national championship game victory over Duke in St. Louis was "The Goose Is Golden" after Jack Givens scored 41 points on 18-for-27 shooting against Duke's zone. He had UK's final 16 points the first half while Rick Robey contributed 20 points and 11 rebounds.

However, the game many UK fans will also remember from that 29-2 season was an 85-76 win over No. 15 Florida State in the tourney's first round. Kentucky was ranked No. 1 and trying to end a two-decade national title drought but trailed Florida State 39-32 at halftime in Knoxville when Hall made the most courageous decision of his head coaching career.

He benched Givens and Robey, both All-Americans, along with starting guard Truman Clayton and went with little-used reserves Fred Cowan, LaVon Williams and Dwane Casey to start the second half. The daring strategy worked as the smaller lineup helped wear down Florida State.

Kentucky went on to finish the season 23-5 and finish second in the Southeastern Conference before losing in the first round of the NCAA Tournament.

Kentucky didn't win the game, but many college basketball observers still consider the 1992 NCAA Tournament East Region final between UK and Duke at the Spectrum in Philadelphia as the greatest college game ever.

Defending national champion Duke won 104-103 in overtime when Christian Laettner—who UK fans still believe should have been ejected early in the second half for stomping on Aminu Timberlake's chest—took a length of the court pass, faked right, dribbled once, turned and hit a jump shot as time expired to send the Blue Devils to the Final Four and deny "The Unforgettables" a chance to win a national title in UK's first year back off probation.

The two teams combined to shoot 61 percent from the field, including 63.2 percent in the second half and overtime.

Pitino said his mind was "in a total fog" after the game. UK players wept in the dressing room. Duke coach Mike Krzyzewski felt so bad for UK players that he joined Cawood Ledford on the UK Radio Network postgame show to praise the Cats and talked about how many winning plays both teams made.

USA Today called it the greatest comeback in sports history when the Wildcats rallied from 31 points down with 15 minutes, 30 seconds to play at LSU and win 99-95.

Teammates said after the game that point guard Travis Ford told them they were not quitting until they won. Kentucky finally got the lead on Walter McCarty's 3-pointer with 19 seconds to play and held on for the win. McCarty had 23 points, and Ford has 10 points and 12 assists in what became known as the Mardi Gras Miracle.

Kentucky's 1996 national championship team earned the nickname "The Untouchables" because it was so dominant all season with a roster that had nine future NBA players. Kentucky went 16-0 in SEC play and had a 25-game win streak during the season after a 10-point loss to UMass in game two and before a SEC tourney final upset loss to Mississippi State.

In the national title game, Delk had six 3-pointers in the first half, and UK beat Syracuse 81-74 to give coach Rick Pitino his first national championship. Delk finished with 24 points to earn Final Four MVP honors, and Ron Mercer had 20 points.

There have been few wins sweeter for Kentucky football fans than the 40-34 overtime victory over No. 20 Alabama in 1997. Quarterback Tim Couch hit Craig Yeast with a 26-yard scoring pass on a third down and 11 play that started a celebration that ended with goalposts being torn down by fans and paraded through campus by happy students and fans.

Yeast insisted he was the one who called the play, and coach Hal Mumme went along with his call.

It was UK's first win over Alabama in 75 years, and 98-year-old Turner Gregg, the UK quarterback for the 1922 win, was at the game.

This was Tubby Smith's first season as head coach, and not only did the team lose three home games, but UK fans booed it during a 73-64 Valentine's Day loss to Ole Miss.

But this team captured the hearts of Big Blue Nation by going on a 13-game win streak after the Ole Miss loss to claim the national title. The players earned the nickname Comeback Cats by overcoming double-digit deficits in their final three NCAA Tournament wins.

Easily the most memorable comeback was overcoming a 17-point deficit in the second half to beat Duke 86-84 in the South Regional in Tampa with over 40,000 fans at the game. Five Cats finished the game in double figures. Smith said UK "exorcised that 1992 loss" to Duke with the win.

Kentucky rallied again to beat Stanford in the national semifinals and then trailed Utah 41-31 at halftime of the title game in San Antonio. No team had ever come back from a double-digit halftime deficit in the national title game to win, but UK won 78-69 behind 17 points from Padgett and 16 from Final Four MVP Jeff Sheppard.

This was a season to remember for UK fans not just because it ended at the Outback Bowl, the first New Year's Day bowl in 47 years, but because of the excitement of the Air Raid offense. This offense under coach Hal Mumme and directed by quarterback Tim Couch resulted in seven wins.

Kentucky won 39-36 on the road at No. 21 LSU. Kentucky, won 68-34 at Louisville and even beat eventual SEC West champion Mississippi State. A last-second field goal miss cost UK in a loss to Georgia.