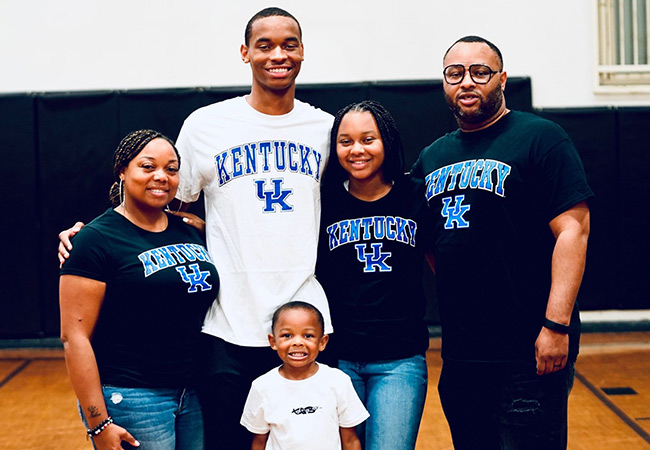 Yet that’s exactly what a former Seattle team – which included UK commit Nolan Hickman Jr., a point guard, and Duke commit Paolo Banchero, a forward – had.

“I am kind of used to not getting the recognition I deserve, so that just makes me go harder, try harder.”

“Nolan started out at quarterback and then moved to receiver and Paolo was the quarterback,” said Nolan Hickman Sr. “They played two years together. Their team made the national football championship before losing.”

Hickman also was a track standout in the 100- and 200-meter dashes as a youngster and a successful swimmer as he did not just focus on basketball.

“He was kind of bummed that he could not swim in high school because it was at the same time as basketball season,” Hickman’s father said. “He loves swimming because it was the first sport he did. He liked it because you competed by yourself. Track helped him learn how to compete. He is very even keeled now, especially on the court. Nothing speeds him up or bothers him.”

The Seattle guard surprised many when he verbally committed to Kentucky because almost no one knew he even had a scholarship offer. His father said being quiet is just the way his son is, and he didn’t see any reason to share news that he had a Kentucky offer.

“He’s a real humble kid. We don’t even follow the [player] rankings or call recruiting services to get him ranked higher. If you love the game, you will get the right offers and the right coaches come after you. We stick by that and our work ethic,” Hickman, Sr. said. “He just wanted to keep the offer quiet. He was ecstatic to get it.”

The Hickmans were almost ready to shut off his recruitment and evaluate the offers he already had when the UK offer came. Hickman, Sr. said assistant coach Tony Barbee made his son a “priority” and UK coach John Calipari made it clear he would be “pushed with nothing given to him” at Kentucky.

“I think Nolan liked the way he heard he would be pushed, and that they were just not giving him the key to the machine. He wants to work,” Hickman, Sr. said.

Hickman, Jr. knew plenty about Kentucky basketball. He said he grew up watching John Wall, DeMarcus Cousins, Devin Booker and others. He’s not as highly rated as many UK recruits — he’s a four-star player ranked anywhere from 30th to 75th in the 2021 recruiting classes by various recruiting services — but that only motivates him.

“I am kind of used to not getting the recognition I deserve, so that just makes me go harder, try harder,” the future UK player said.

Lack of recognition has not been a problem with UK fans since his commitment to John Calipari’s team.

“All they’ve done is show me love. A lot of people comment on pictures and stuff [on social media],” Hickman, Jr. said while noting he went from 7,000 to 10,000 Instagram followers in less than two weeks.

The 6-2 Hickman transferred from Eastside Catholic in Seattle to Wasatch Academy in Mount Pleasant, Utah, for his senior season and his new coach, Paul Peterson, says he’s going to be a great fit at Kentucky and its fan base.

“The biggest thing is he is not afraid to be challenged. Whether he’s the No. 1 guy or No. 2 guy, he’s going to work the same and get after you whether it’s here or at Kentucky,” Peterson said.

He’s not afraid of off-court challenges, either. He’s launching TheGiveBack Foundation in January: he has rights to his own website, nolanhickman.com, to help families who need extra assistance. The last two years, he’s had his own basketball camp in Seattle to give back to inner-city youth. This year it had to be virtual yet still had 88 registrants (that doesn’t count siblings who used the same link) with participants from Indonesia, United Kingdom and the Philippines. He sent every registrant a basketball, T-shirt, water bottle, face mask and sanitizer for free.

“Shipping alone was almost $600, but that’s just the sacrifice he wants to make,” Hickman, Sr. said. “Family members donate, private sponsors help. He donates all proceeds to the Boys & Girls Club, where he plays basketball so more kids can play basketball. Basically, he just loves giving back and helping anyone he can.”