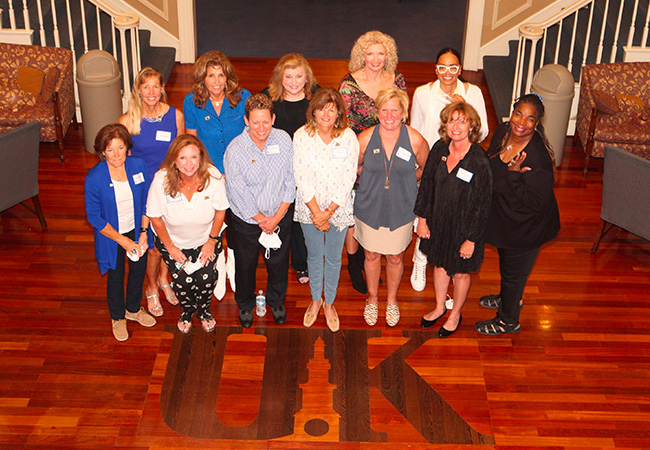 The pandemic of 2020 has robbed us of so many moments and events; it’s hard to keep track of them all. One of them, the University of Kentucky Hall of Distinguished Alumni ceremony, was to include UK All-American women’s basketball player Valerie Still. She to this day owns the school scoring record.

Isolated at her New Jersey home, Still decided to organize an event of her own, which is why on October 9, she and her former teammates, along with staff members from the 1981-82 Lady Kats (as they were known then) gathered at the UK Alumni House. Socially distanced, all wearing masks with fans joining via video conferencing, they celebrated the memory of their 1982 Southeastern Conference championship – still the only women’s basketball title in school history.

“This team, this young group of girls, fighting stereotypes and identity crises and still getting on the court and doing what we did... especially at UK, which is a men’s basketball haven.”

Valerie Still went on to a pro career, both in Europe and in America; her name still dots the UK record book. And even though she pulled together the event, she was determined that it would not be about her – or even basketball, for that matter. She wanted it to be about people – the ones in the room, and beyond.

“Today with the pandemic, we need to bring people together,” she says. “This is all about, How do we overcome all these things that divide us? And I think sports does that in a way that’s not patronizing.”

She wanted to be certain fans from today and yester-year understand that while she may have been the All-American, she was nothing without her teammates.

“Patty Jo Hedges and Lea Wise,” UK’s starting guards that season, “were the most unselfish and talented players but (without) an ounce of selfishness or arrogance.”

Sadly, their head coach was absent. Terry Hall succumbed to cancer in 1997 at age 52. Hall had taken over for Debbie Yow, who had recruited the majority of the squad. Their personalities couldn’t have been more different. Yow resembled a free spirit; Hall, more tactical and disciplined.

“When [Yow] left,” says Still, “a lot of people were upset. We were like kids who loved mom and now she’s leaving and now we’ve got step-mom coming in. Terry Hall was from U of L. We hated them. ‘Why are you hiring her?’ ”

But they came around as Hall guided them to the top of the conference, past Pat Summitt’s Tennessee Lady Vols and into the history books.

“This team, this young group of girls,” Still says, “fighting stereotypes and identity crises and still getting on the court and doing what we did… especially at UK, which is a men’s basketball haven.”

Never was that more apparent to her and some of her teammates than the day they wandered into Memorial Coliseum at noon, when the court unofficially belonged each day to then-Athletics Director Cliff Hagan, a former UK All-American himself. Hagan conducted daily pickup games during his lunch breaks. The girls? They wanted in.

“We showed up one day, these snotty-nosed girls, wanting to get into their game,” Still says. “By the end of the year, they embraced us, coming over and playing with them. It’s all about respect.”

And now the vintage Lady Kats own a tangible symbol of respect. At the celebration each of them, players and staff alike, received championship rings after all these years, a symbol of what they accomplished by pulling together.

“I’ve been on (pro) teams that have had the most talented players and were not able to win,” Still says. Then she described the Columbus Quest, the pro team she led to a pair of titles in the now-defunct ABL. “Each player knew they played a role. No matter how small or big, it was significant.”

That same attitude led to a gathering of Lady Kats, nearly 40 years later, to smile, laugh and celebrate a championship season.