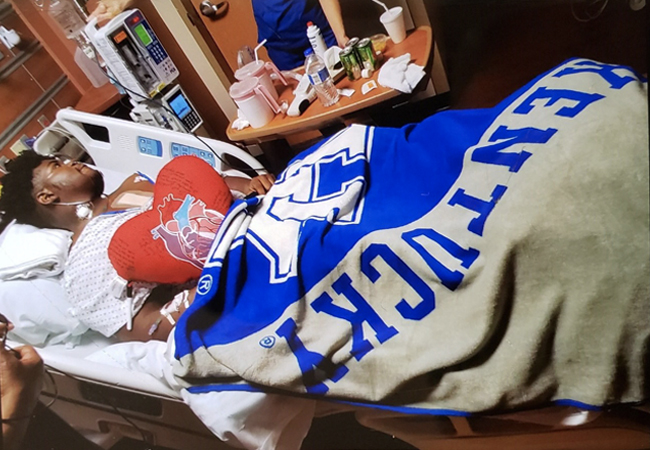 Kenneth Horsey knew way too much about mental and emotional pain before Kentucky even had to deal with a COVID-19 stress-filled football season.

The sophomore offensive guard from Florida had open-heart surgery in the spring of 2018 before he even graduated from high school. At age 18, he didn’t know if he would be able to head to Kentucky to play football, where he had signed a full scholarship just a few months earlier. He worried if he would ever play football again — some doctors told him that he would not — but his surgeon assured him he could and would play football again.

He redshirted at UK during the 2018 season as his health was closely monitored. He played in four games in 2019 but then became a starter at left guard this year. He helped UK rank among the SEC team rushing leaders again.

Since his 2018 surgery, he has lost about 50 pounds from his rehabilitation to continued work/training at Kentucky. He broke his left hand before this season started, but the surgery during preseason camp did not slow him down.

His inspirational story made him one of the three 2020 Mayo Clinic Comeback Player of the Year Award winners. The announcement was made at the Fiesta Bowl, but Horsey was not there; he was helping UK beat North Carolina State in the TaxSlayer Gator Bowl the same day.

“This award meant a lot to me because at times during my recovery, it felt like not only was it taking a huge toll physically but also a big toll mentally and emotionally,” Horsey said. “There was a time I had to sit back and pray to come to terms with the fact that God was using me for something. I just didn’t know then what it was. To receive this award feels good because it’s like I am ... really, I don’t even know how to explain it. That what I went through can motivate and inspire others is a blessing.

“I know that God didn’t put me in the position and give me this platform just for football. I am more than an athlete. But to know this award can help me reach out and inspire people across the nation is an amazing feeling that I don’t take lightly.”

He has volunteered with the American Heart Association and spoken at Heart Walk. He wants to do anything he can to help inspire others the same way former UK offensive line coach John Schlarman did before his death in November from cancer.

“I think of Coach Schlarman all the time. It didn’t take getting this award for me to think of him. Getting the award did make me feel good for him because — and I told him this before he passed — that if anybody could come back strong from what he was going through, it would be him and that inspired me. He was always motivation for me. No matter what I was feeling, I knew what he was going through and his positive energy and motivation always made me feel good.

“Sometimes I press my [surgery] scar just to remind myself of the things I went through and to remind me to be grateful for everything I have and be blessed with the opportunity that I’ve been given,” Horsey said.

Horsey has big goals for himself — more leadership, earning All-SEC honors — as well as his team in the 2021 season. Kentucky got a big boost when All-American tackle Darian Kinnard decided to return to UK rather than go to the NFL. More good news came when guard Luke Fortner and tight end Justin Rigg both opted to take the extra year of eligibility to play another season. Same with 2020 leading receiver Josh Ali.

“Any time you keep that continuity in the line, that is always good for chemistry. Now we have plenty of experience coming back. We won’t have Landon [Young] and Drake [Jackson], but new guys who play will have experienced guys to help them. I can now increase my leadership role in the line,” Horsey said.

“We have guys coming back that know how to win but want to win even more games and do bigger things. We have guys on both offense and defense waiting for a chance to have bigger roles. I really like what I think our team can be next year and just glad I get to be part of it again.”