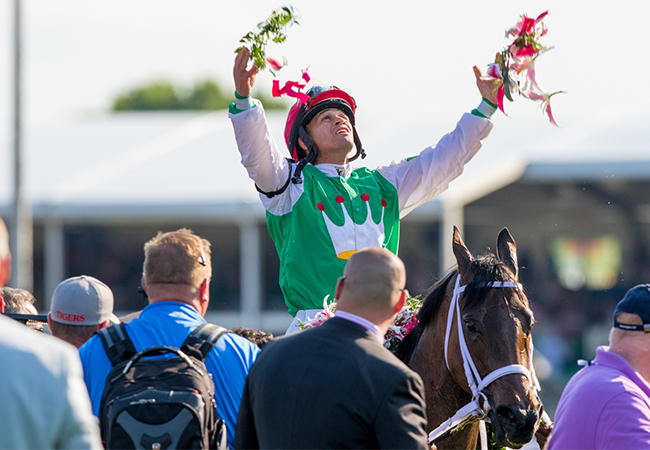 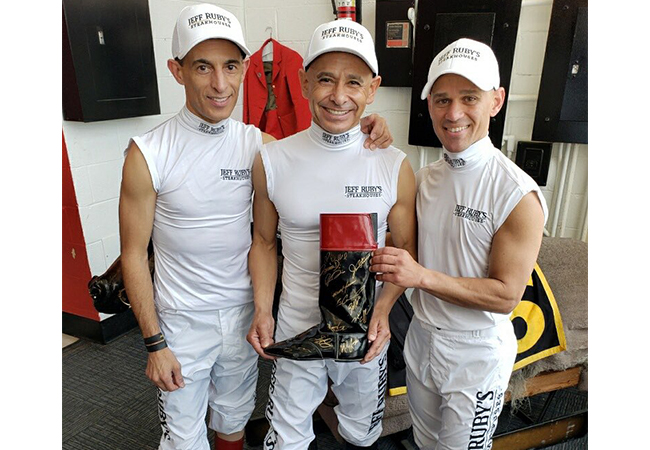 By any measure, Javier Castellano has already won. He has reached the top of his profession, has three children with his wife Abby and has achieved, even surpassed, the American dream. So, what drives the 43-year-old Hall of Fame jockey to stay in the race?

Castellano is one of the greatest thoroughbred horse racing jockeys in history and was definitively the best jockey for a four-year consecutive stretch — he won the 2013, 2014, 2015 and 2016 Eclipse Award for Outstanding Jockey, taking home the highest purse winnings of any such athlete in those years. He has won more than 5,300 races and netted more than $354 million in earnings over a quarter-century career. In 2017, he was inducted into Saratoga’s National Museum of Racing and Hall of Fame.

Some of us might be content to rest on our laurels after reaching a summit like that, but Castellano is still competing at the top of his sport. At the time of this writing, he was racing at New York’s Aqueduct Racetrack, winning a $250,000 purse on a horse named Search Results. And, what’s more, he is doing so despite significant setbacks, including three weeks of quarantine following a positive COVID-19 test in March 2020, and a three-month recovery from surgery on his right leg late last year.

Castellano, a Catholic who frequently retweets Pope Francis and Spanish Bible verses, explained that he is propelled by a faith that’s derived from his “great, great family,” as is his passion for horse racing. He was born in Maracaibo, a shoreside city in Venezuela, where his father, Abel Castellano, and uncle on his mother’s side were both jockeys. The younger Castellano began his career there as well, racing at Maracaibo’s Santa Rita and Caracas’s La Rinconada race tracks in the late ’90s.

“The way I grew up, what I saw in the beginning of my life, I saw my dad ride horses,” he said. “I feel proud that my family chose to be in our industry of horse races. I feel like that’s where I’m meant to be... [And] I feel proud to be part of Venezuela... My people in Venezuela, when they are behind you and support you, they give you more motivation to keep going.”

But his promise as a jockey quickly brought him to the U.S.. He earned his first win at Florida’s Calder Race Course, later renamed Gulfstream Park, in July of 1997. In 2001, Castellano moved on to the New York State racing circuit, then quickly began racking up career- defining wins, including a wire-to-wire win at the 2004 Breeders’ Cup Classic while riding Ghostzapper (a “special horse” that “put me on the map,” he said) and the 2006 Preakness Stakes on Bernadini. In 2013, he broke the record for most purse earnings in a single season by any jockey, earning more than $26.2 million. In 2017 he scored a second Triple Crown win at Preakness riding on Cloud Computing. In 2019 he earned his twelfth Breeders’ Cup win.

Naturally, a career like Castellano’s has meant success at Keeneland, where he first won in 2002. He is the seventh-leading jockey of all time by stake wins at the track, including eight such wins as recently as 2019. He finished on the board in the Toyota Blue Grass last year on Vekoma.

“To me, it’s a really wonderful track,” Castellano said of Keeneland. “I’m very fortunate to be riding that track, it’s very competitive. It has the best horses, the best jockeys. It’s unique and one of the most beautiful tracks in the country — good grass, good dirt and good horses.”

Though he’s pressed for time whenever he’s in town, Castellano does his best to explore Lexington when races bring him here. Despite his athletic determination and lithe build, he enjoys all types of food and always makes sure to visit his favorite local restaurant.

“In between the meet, absolutely, I’m able to enjoy the city,” he said. “Especially Jeff Ruby’s, one of the best steakhouses in the country... Lexington is one of the best towns in all of Kentucky, the food, the people, the atmosphere, everything.”

There may not be any one thing that is pushing Castellano to compete with jockeys who are half his age, despite injury or any other setback. He seems to derive his enduring passion innately, from an upbringing that instilled it within him and a drive to work harder than anyone else. But through it all, it’s clear that an appreciation for all that he’s had — a Hall of Fame career, a loving family, even great steak — is central to his race for more. •