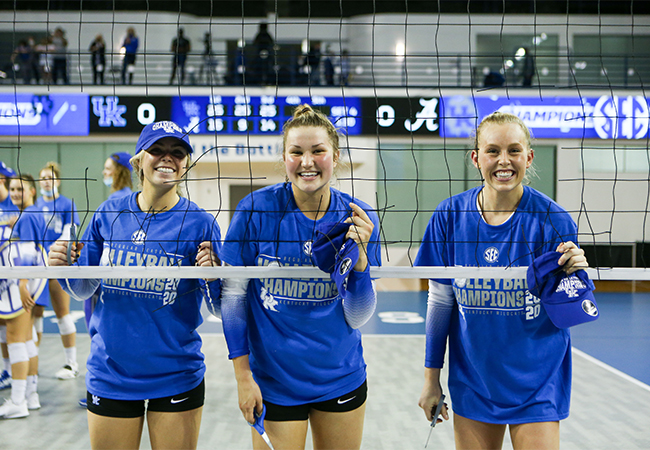 Three UK volleyball athletes demonstrate what it means to be a true team player. by Larry Vaught

Before they became volleyball teammates and roommates at the University of Kentucky, they sort of knew each other. But they never really envisioned what a terrific friendship they might develop.

Lauren Tharp of Louisville and Alli Stumler of Floyds Knob, IN had played club volleyball against each other in high school. They had each met Cameron Scheitzach of Orlando at camp. They lived in the dorm their freshman year at Kentucky before moving to an apartment for the last two years.

They have been part of three straight Southeastern Conference championship teams, and this year, the three roommates/ teammates were among 24 UK student-athletes chosen for induction into the Frank G. Ham Society of Character. This recognizes Wildcats who have shown an extraordinary commitment to academic excellence, athletic participation, personal development and career preparation.

“Those are the things you are very proud of as a coach,” said UK coach Craig Skinner. “It’s not just how fast you can run, how high you can jump or how hard you hit [the ball]. It’s about how you interact with people on campus and the academic side. It’s the whole person, something we talk a lot about in recruiting. To have three off our team selected in one year is an honor, and it is kind of weird that they are also all three roommates.”

Tharp said none of the three knew the others received the honor until UK posted the announcement.

“It was kind of funny when we found out,” Tharp said. “It’s been great. We are really close and are best friends, along with roommates and teammates. It’s great being surrounded by people who make you want to be better and give back to the community. We all have the same mindset and giving back attitude, and it’s easy because when somebody wants to do some type of community service, we all just hop in and go.”

Scheitzach is a kinesiology major who plans to obtain a Masters of Public Health and become a physician’s assistant. Stumler is an elementary education major while Tharp is a special education major. All were National Honor Society members in high school.

“Ali and I are in some classes together this semester,” Tharp said. “We are not super competitive academically because we like to try and understand each other’s major. Over dinner a lot of times we talk about what we did that day. It’s just awesome to hear about their successes.”

They didn’t have time to talk about the honor because it was announced during their season, but Tharp said it was “more rewarding” because it recognized their character beyond what they did on the volleyball court.

“Craig has always been a person to emphasize giving back to the community,” Stumler said. “As soon as you get on campus, he talks about giving back and how you can make an impact off the court, and being involved is something that is part of our team. That’s why this is so important.”

Even the pandemic didn’t stop the three from finding ways to give back during UK’s championship season, thanks to help from the UK staff.

“It has been harder to do this year, but through Zoom calls with children at the hospital, we got to talk about volleyball and our lives. Finding little ways to do that was difficult with the pandemic but something that was still important to all of us to find a way to keep doing,” Tharp said.