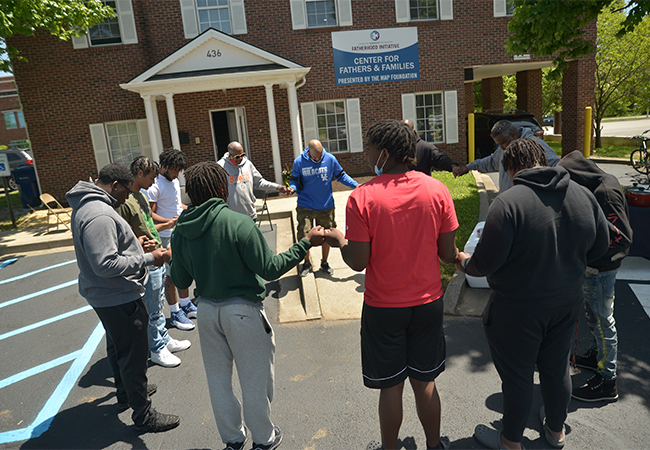 Nearly a year ago, I became a father. And I quickly realized that there is no how-to guide for first-time parents — it’s something that does not come naturally to everyone, that changes you on the most fundamental levels and takes time and patience to accept.

But it was also immediately clear just how important the role of a father is for my child. That’s apparent in the middle of the night when my daughter wants to be comforted, and it’s well-known by David Cozart, the director of Lexington’s Fatherhood Initiative.

The initiative is supported by the Lexington Leadership Foundation, a faith-based organization that offers programs focused on improving the community. It has been encouraging Lexington’s fathers to participate actively in their children's lives and helping them understand the most positive ways of doing that for a decade, a mission that Cozart feels is directly tied to better outcomes for the community at large.

“I believe that fathers already have a desire to be involved in the lives of their children, I just believe that all of us could use some more tools and instruments to better be involved,” Cozart explained. “It’s important to do this because we know that positive father engagement decreases the likelihood of negative outcomes for children and families. Research has shown it reduces infant mortality rates and obesity and behavioral issues and mental and emotional disorders. So, it’s important because the presence of a positive father in the life of a family reduces pathology.”

The Impact Of Fatherhood

The initiative hosts fatherhood classes at neighborhood-based sites throughout the city, focused on responsible parenting and building healthy relationships through 12-week courses.

“The first thing we do is amplify this fact that fathers are valuable and they’re engagement is valuable, because the narrative has not always been that fatherhood engagement is valued,” Cozart said. “Secondly, we start addressing any barriers that the father may have to positive engagement... And thirdly, we help them overcome any barriers in economic sustainability and we seek for them to become economically sustainable.”

Educating fathers in this way does not merely encourage happier families — though that would be reason enough to participate. It makes a significant impact on the entire Lexington community, turning those who may have struggled with the many responsibilities of social and familial participation into model citizens.

Cozart said that his personal inspiration for guiding the Fatherhood Initiative comes from his religious faith and the exponential impact he sees these lessons have on fathers, children and our society at large. He called father absence a “root cause” and “downstream issue” that plays a part in violence, substance abuse, schooling problems and other fundamental issues that organizations across the spectrum are seeking to solve.

“I believe that if we would address father absence and promote father engagement across sectors and multiple disciplines, we would be exponentially impacting all of the issues we’re seeking to address,” he said.

The Fatherhood Initiative sees enrollment from fathers who are interacting with Lexington’s social programs or court systems, as well as fathers who find the program through its church and faith-based partners. But Cozart’s belief in the importance of positive fatherhood involvement makes it clear that anyone and everyone who is a father can benefit from participating.

For instance, working from home since my own daughter was born has made me feel that I am an exceptionally active presence in her life. Few fathers I know can say that they change dirty diapers in between daily meetings. But, speaking with Cozart and gaining an understanding for just how fundamentally important fathers are for other positive outcomes in our society, I couldn’t help but ask how he might help me become a better dad.

Then, Cozart underscored a challenge I have encountered numerous times in my early journey as a father, one that I would imagine many fathers struggle with, regardless of their other life circumstances.

“Secondly, I say to you that you do not know it all and you will never know it all,” he added. “Being a father is a challenge, so when you feel the pressure of that challenge, do not let that discourage you because you’re not alone in that. Every father has apprehension about their ability and capability. So, be there, be present — not just physically, but emotionally — and be attentive.”