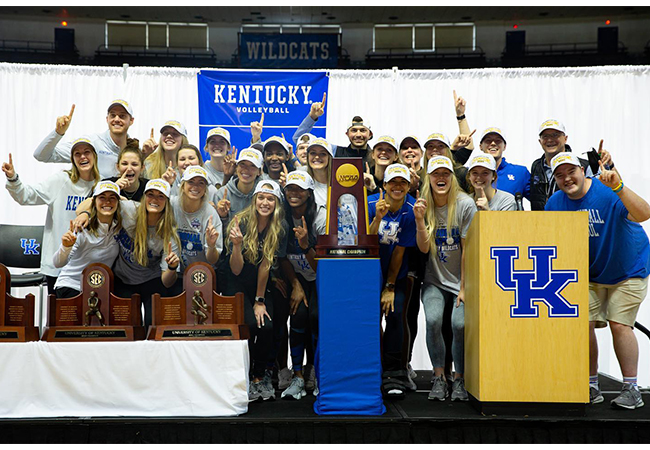 Coach Craig Skinner had a hard time putting into words exactly what it meant when Kentucky won its first volleyball national championship.

He could still remember his first home match as head coach in Memorial Coliseum when 67 fans were there; “Dreams start somewhere,” Skinner said. He could remember some of the disappointing NCAA Tournament losses the team suffered in recent years. He thought about all the former players who helped lay the foundation for UK’s recent success.

“Just amazingly proud to live a dream right now,” Skinner said after the national championship win over Texas. “Validation of our talk is huge. I am just so thrilled for our current players who believed so much in us.”

Skinner and his players were amazingly confident they would win the national championship and then backed it up with dominating play in five NCAA Tournament wins.

That’s because Kentucky had both great talent and great chemistry. Senior setter Madison Lilley was the national player of the year. Four other players — seniors Gabby Curry and Avery Skinner, Stumler and sophomore Azhani Tealer — also earned All-America honors. Craig Skinner was the national Coach of the Year after leading UK to 24 wins in 25 matches.

Lilley knows not everyone took her seriously when she talked about a national championship as soon as she got to Kentucky four years ago.

“It might have been cute as a freshman [to say it], but we knew it was going to happen, and that’s what makes this all the better,” Lilley said. “This has been a grind, to say the least, this year. It took a lot of self-discipline to have this ending. There were hard days, no doubt.”

One thing that helped Kentucky survive those hard days — and win the first volleyball national championship ever for a Southeastern Conference school — was team chemistry.

“If you did not have good people in a year like this, good luck. We would not be here if we did not have the type of people to make this go,” the Kentucky coach said. “You can’t recruit chemistry, but you can recruit people who understand the bigger picture and will be happy for other people. If you recruit selfish people, you’ve got a problem.”

Gabby Curry’s mother, Dawn, said the team chemistry was “not even explainable” considering all the COVID protocols the players had to accept.

“I think it was just total respect across the board with the upperclassmen and freshmen. The younger players bought in 100 percent with no pushback at all, and you could see that in the team chemistry,” Dawn Curry said.

Kentucky certainly will have a roster next season capable of competing nationally again. Whatever happens, Craig Skinner hopes his team’s championship has a long-lasting impact on the sport, especially in Kentucky.

“I hope it blows the roof off,” Skinner said. “This game is an unbelievable game. There are more girls playing high school volleyball than any other team sport in the country. There is more interest; it’s such a marketable sport. This sport is about ready to combust into the stratosphere.”

Either way, Kentucky will always have this national championship to cherish.