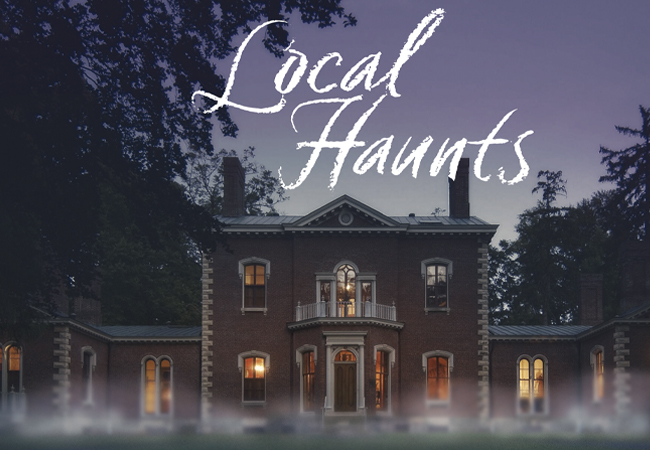 With a long history and stunning architecture, it’s no wonder that people love to visit Lexington. If you believe the tales, some even linger here in the afterlife. Many spots throughout our city are rumored to be haunted, with stories of unexplained sounds, strange occurrences, and even sightings of apparitions in the night. These hair-raising Local Haunts have stories that frighten and captivate – with a little chaser of some fascinating local history.

This historic home in Lexington served as a refuge for “The Great Compromiser,” Henry Clay. A statesman for half a century, Clay was a key figure in Washington, D.C. Getting to the farm he built in Kentucky meant he could unwind and reflect out of the public eye.

So perhaps that’s why the home is thought to be one of his favorite places to linger in the afterlife.

Sightings of Clay’s ghost have been reported in what was originally the parlor (now staged as his personal study). Some guests have said they spotted his spirit leaning against the mantel, looking at the mementos of his many achievements in life.

Built in the 1850s, Loudoun House is considered one of the greatest examples of Gothic Revival architecture in the state and is listed on the National Register of Historic Places. The exterior has a spooky feel all on its own, but the home’s only inhabitants are even more frightening.

Guests report seeing two women in Victorian dress, one in the dining room and the other in the west part of the mansion. Some say they can smell a floral perfume lingering in one of the upstairs rooms while others have reported hearing ghostly music and voices. Some even report seeing a mysterious black cat inside!

Some say that one of the ghosts is surely the wife of the home’s original owner, Francis Key Hunt. Upon his death, Julia was forced to sell the house she so loved – and named – to move in with her daughter and son-in-law. Perhaps her spirit returned to hear “The Bells of Loudoun” once more.

Locals know that ghosts aren’t the only thing you can see inside Loudoun House; it also happens to be the home of the Lexington Art League! They have converted the mansion’s many rooms into galleries. They have regular exhibitions and are open to the public.

While Dracula doesn’t stalk the campus, there have been some unexplained events that live in the school’s legend. Reportedly, a former professor named Constantine Rafinesque placed a curse on the college when he was fired by then president, Rev. Horace Holley (whose wife may have had a dalliance with the nutty professor!)

The year after his departure, Rafinesque died of yellow fever. The year after, Transy’s main building burned down. When the graveyard containing his remains was set to be destroyed in the 1920s, some fans of his legend went and dug up what they believe to be his remains and interred them beneath the steps of Old Morrison. (Spoiler alert: it probably wasn’t his bones. Oh well.) Rafinesque’s legend is so cemented in the college’s history that the week leading up to Halloween is named for him.

Rafinesque isn’t the only tall tale from campus lore. Students say they sometimes wake in the middle of the night to a male student in gym shorts standing at the foot of their beds who vanishes before their eyes.

If you’re a fan of all things eerie, The Monroe Moosnick Medical and Science Museum may be of interest to you. It is a collection of nineteenth-century anatomical models, science artifacts, and botanical paintings with a definite spooky edge. The “museum” is currently understaffed, so follow them on Facebook for the latest info regarding when the next available tours might be.

Previously known as Gratz Park Inn, The Sire has a history that dates back to 1916. The building was constructed as a practice for Drs. Waller O. Bullock, David Barrow, and David Woolfold Barrow. It was the springboard for Lexington Clinic.

Of course, with its long history comes tales of ghosts. People have reported seeing a woman in a white dress and hat on the grounds, as well as a young girl running and playing jacks in the halls. An elderly man is said to turn televisions on and off at all hours. Some have even reported seeing a mournful man lingering in the lower level.

Also known as the Hunt-Morgan House, this federal-style home was built in 1814. It is said that the ghost of John Wesley Hunt wanders the halls, going on about his business as if he is quite unaware of his spectral state. It is rumored that his untimely death by cholera left him working on unfinished business in the hereafter.

One of the family’s slaves, Bouviette James, was a caretaker for the Morgan children. She sometimes appears to sick children in the house, singing to them and stroking their hair. She is said to still wear her signature red shoes, gifted to her by John Hunt Morgan.

Built in 1951, this elegant establishment was reportedly the site of two murders in the past. The victims’ spirits are said to roam the halls, opening, and closing doors.

The hotel has gotten a major renovation recently. Did all that paint cover up the spirits within? You’ll have to spend the night to find out!

The Mansion at Griffin Gate

It’s hard to believe that this grand mansion – built in 1854 – once served as a home to a local family. It is rumored that a teenager, Gretta, haunts the “blue room,” where she is said to have hanged herself after being rejected by a local boy. Lights in this room often flicker and sudden cool breezes tickle guests’ legs as they sit to dine. Gretta apparently gets angry when others are in “her” room, and will shake shutters or swing the chandeliers to show her disapproval.

This home largely serves as an event venue now. Fortunately, brides who have been wed there report having no trouble out of Gretta.

Where better to haunt than the city’s largest cemetery? The burial grounds were officially established as a cemetery in 1849. The Lexington Cemetery serves as the final resting place for locals from all walks of life, from Henry Clay and legendary UK coach Adolph Rupp all the way to William “King” Solomon, a drunkard who stayed during the 1833 cholera epidemic to bury the city’s dead, making him a town hero.

The beautiful cemetery has a somewhat eerie reputation. While the grounds appear peaceful and serene, guests have reported hearing disembodied voices and even blood-curdling screams. The tombs built into the hills have a foreboding feel that will send chills up your spine. Some have claimed that statues sometimes move.

Perhaps most terrifying is the shadow figure guests report seeing near the back of the mausoleum. People who witness the figure say they feel overcome with a sense of anger that they can’t explain. Others report foul smells and other paranormal activity in the spot.

While cemeteries may have a reputation as spooky sites, this one is truly stunning. The foliage alone will be worth a trip this month! If you choose to visit, please remember that this is an active cemetery. Please be respectful of people who are there to visit their loved ones.