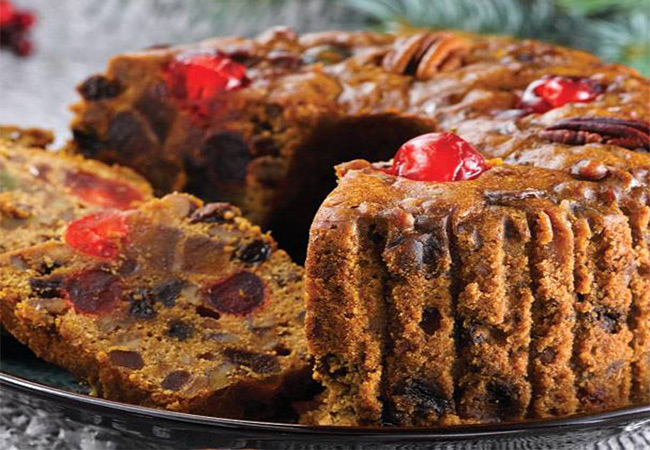 How can one cake be so divisive? There are some who love the stuff, cherishing their first fruitcake of the year like a rite of passage, a singular joy that can only be found in the Christmas season. Others groan, roll their eyes or outright laugh about the dense little loaves, taking joy in mocking the sticky treat. There is no middle ground. Here, we weigh in on this hefty debate!

“It’s always the same: a morning arrives in November, and my friend, as though officially inaugurating the Christmas time of year that exhilarates her imagination and fuels the blaze of her heart, announces: ‘It’s fruitcake weather! Fetch our buggy. Help me find my hat.’” - Truman Capote

Fruitcake is a timeless tradition. The very presence of a fruitcake heralds the start of the holiday season in a way that no other dessert could even try. So before you turn your nose up at this festive treat, learn a little bit about its history!

The earliest recipe for fruitcake we have on record comes from ancient Rome. The cakes spread through Europe in the middle ages, and it was considered an absolute decadence because many of the ingredients were so rare. In the sixteenth century, sugar from the American colonies made candied fruits more affordable, making these cakes more widely available. The high alcohol content meant it could be shelf-stable for a long, long time; this made it a perfect Christmas treat, as it could be prepared in advance and eaten in the cold winter months.

Fruitcake gained popularity as a dish for special occasions in Victorian England (Princess Diana and Kate Middleton both served fruitcake at their wedding receptions.) The Twelfth Night was celebrated with a fruitcake with a coin baked inside, bringing good luck to whoever found it (and presumably, bad luck to whoever accidentally swallowed it.)

The fruitcake's status as the Christmas gift that keeps on givin’ was cemented when mail order fruitcakes made their debut in the US around 1918. These mailed cakes were offered up by a number of companies, including Collin Street Bakery and The Claxton Bakery, both of which still churn fruitcakes out to this day!

“The worst gift is a fruitcake. There is only one fruitcake in the entire world, and people keep sending it to each other.” - Johnny Carson

It shows up in your mailbox and nearly snaps the darn thing right off the pole. You lug the box inside, sure that someone has finally mailed you that gold bar you’ve been asking Santa for since you were five. You slice open the box and the sickly sweet aroma hits you just before the disappointment settles in.

89% of Americans hate fruitcake. Admittedly, 1 in 5 have never even tried it, probably because it looks and smells so awful.

Your mind immediately shifts into overdrive, trying to think if you know someone – anyone – who actually likes fruitcake, so you can foist this thing off on them. Then, a petty voice in the back of your mind decides it’s time Linda in accounting got her comeuppance in the office gift exchange…

The cake is impossibly dense and sticky, yet somehow bone dry. The “candy” is a horrifying spread of red, green and yellow blobs that could easily remove every filling in your teeth. If you’re lucky, the thing is doused in Bourbon (yet is disappointingly, confoundingly hard to set on fire).

Now, most people agree that a homemade fruitcake – that is, a fruitcake made with real dried fruits rather than those tubs of candied garbage they sell this time of year – is a far different thing. Rich molasses cake with rum-soaked dried cherries, currants and raisins doesn’t sound half bad. But we can’t let this fiend off the hook just because it’s possible to make it taste better. The fact is that the best use of a fruitcake is as a weapon in the event of a home invasion.

So this year, if someone unironically gifts you a fruitcake, we give you full permission to cut them off of the Christmas card list next year. But by all means, honor Johnny Carson’s memory by regifting that loaf to the next sucker. Unlike the dodo, we can’t let this stupid lump go extinct completely.