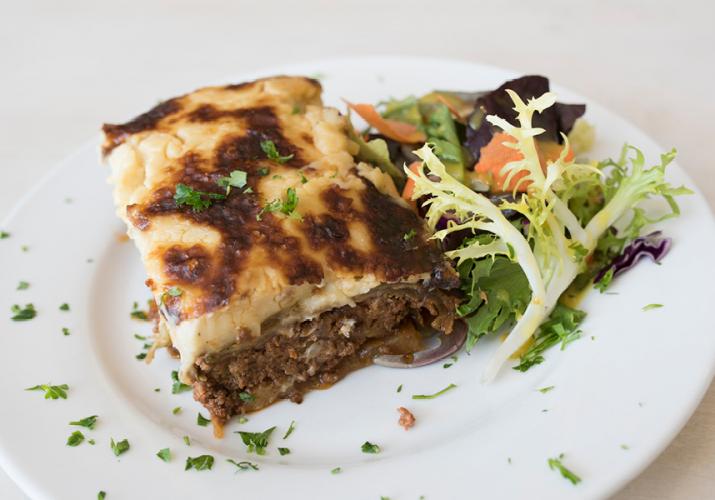 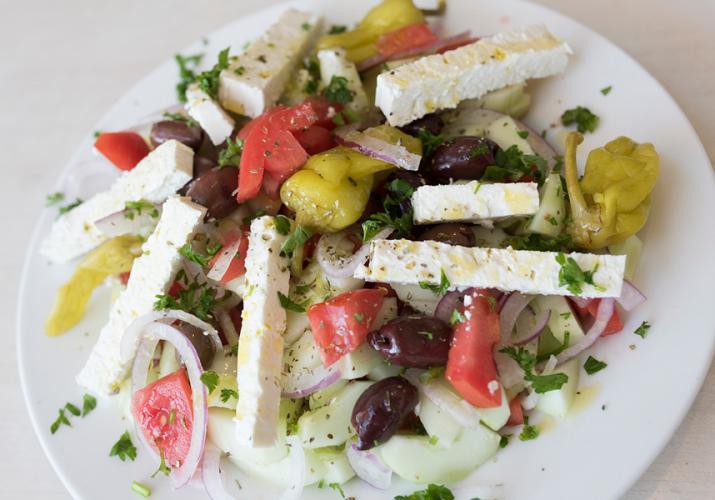 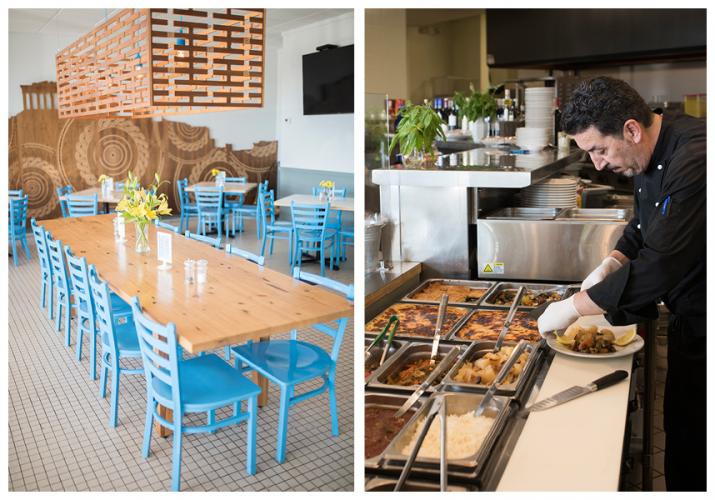 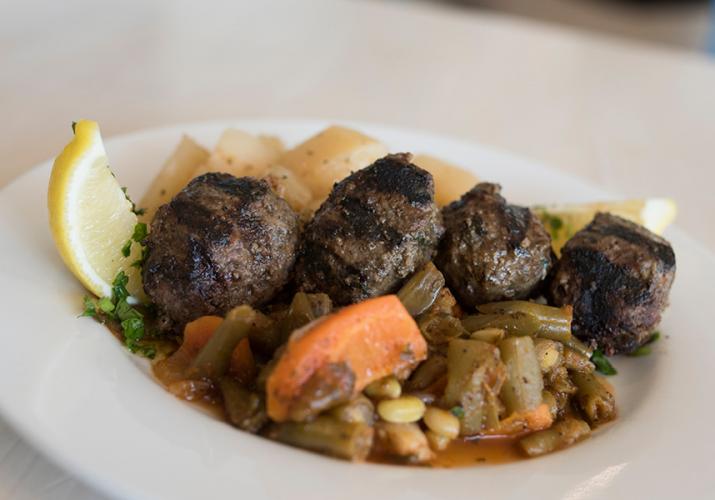 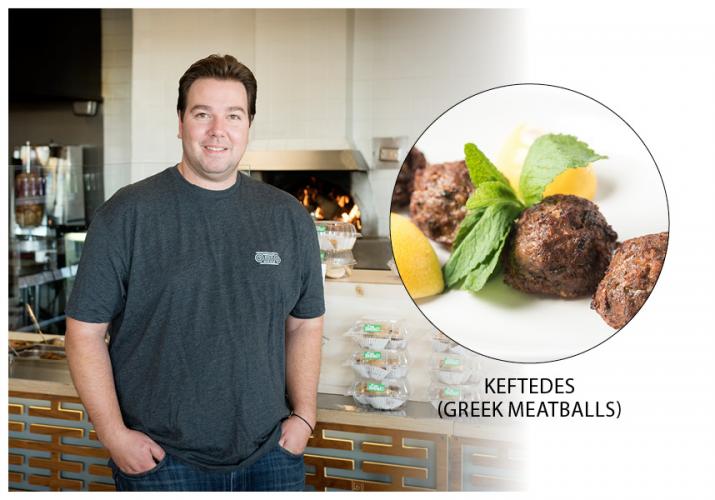 Most restaurant owners build or lease space then work to attract customers. Ilias Pappas did the opposite.

“We worked out of a tent but operated it as a food truck, only we didn’t have a truck,” Ilias explained. “Serving real Greek food from tents set up at West Sixth Brewing, Country Boy Brewing, and other businesses around Lexington, he built a loyal following that was willing to drive all over town to find him.

“In the back of my mind was always to get a restaurant,” he continued. “I’ve been around for many, many years in kitchens, but this was my first venture here.” When the 36-year-old native of Greece opened Athenian Grill at 313 South Ashland Avenue in October 2013, he already had a strong base of customers. Ditto for his second location at 115 North Locust Hill Drive, which opened in May 2015.

The secret to Athenian Grill’s success is no secret. “I lived in Greece for my first 18 years, and I ate this food everyday,” Ilias said. “My mom cooked it. My grandmother cooked it. That’s the way we cook it here. That will never, never change as long as I’m involved.”

"Everything I do is very calculated and very planned. People believe we have expanded rapidly. If it were up to me with my aggressive style, we would have grown three times as fast."

Customers enter a short cafeteria-style line where many of the menu offerings – spanakopita (spinach pie), beef stew, roasted vegetables, basmati rice, pastitsio (Greek lasagna), to name a few – can be seen and served up on the spot; others are grilled or cooked to order. A cooler at the checkout counter is loaded with Greek beer and wine and local brews (West Sixth and
Country Boy).

“This was our choice to have the authentic Greek home cooking restaurant with a fast casual atmosphere,” Ilias said. “You order, we bring your food to your table. Part of ordering at the counter is for you to see the food. We are working to explain and teach the public what Greek food is.”

If you’re still unsure what to order, Athenian’s patient staff will ask about your preferences and make suggestions. First-time customers often become regulars who introduce their friends to Greek cuisine. “We see them going over the menu and explaining what everything is,” he said. “It happens all the time.”

Ilias’s favorite entrees, marked with an asterick on the menu, range in price from $8.50 to $10.75, include moussaka (layers of ground beef, lamb, and eggplant topped with béchamel white sauce and baked), kokinisto (Greek beef stew), avgolemono (traditional Greek soup) and grilled soutzoukakia (Greek meatballs). Traditional dips ($3.50), appetizers ($5.95-8.50), sandwiches ($8-9.95) and sides ($3.15-3.50) round out the menu, which offers plenty of gluten-free and vegetarian options.

One of the more popular choices is gyros made with lamb, chicken, or a combination; Greek sausage, hummus or vegetables for $7 or $9.25 with a side and drink.

Souvlaki, which the menu describes as Greece’s version of fast food, is a skewer of grilled meat that has been marinated overnight in olive oil, lemon, herbs and spices.

The mixed grill is an assortment of grilled meats served over oregano-seasoned fries ($39.95 for two).

Fans of Greek salad will adore Athenian Grill’s iteration. Like
everything else on the menu, it is made fresh daily with a colorful mix of greens, tomatoes, cucumbers, pepperoncini, kalamata olives and feta cheese. Homemade dressing complements without being overpowering.

No Greek meal is complete without a piece (or three) of baklava ($3). The traditional pastry is made of layers of filo filled with chopped nuts and sweetened and held together with syrup or honey.

While the food is as authentic as it gets, the dining room at both locations is modern and fast-casual with nary a Corinthian column or plastic grape leaf in sight. Ilias’s bride Rebecca Cox, an architect, chose colors, patterns and textures reminiscent of Santorini in designing the interior.

“Ilias wanted the place to feel Greek but not in a cheesy way with statues of nudes everywhere,” Rebecca said. “We used a lot of natural wood and older, rustic wood and kept everything light
and bright.”

Aegean blue chairs and fresh yellow flowers on every table reflect two things Greece is known for: the sea and the sun. Woodwork designed and built at nomi, the architecture firm where Rebecca works, is based on traditional Greek patterns.

Nomi craftsmen carved a slab of wood into a silhouette of the Acropolis and Parthenon, then etched it with round medallions like those commonly seen in mosaic floor patterns. It takes up a good portion of the back wall.

As successful as Athenian Grill is, the restaurants represent only a part of Ilias’s business empire.

“We have our own product line that just launched in Kroger and a very aggressive catering division,” he said. “There are so many different arms to this company. It’s like an octopus.”

It takes about 25 full-time and 15 part-time employees to meet the demand. For example, during the September yearling sales at Keeneland, Ilias’s company often catered or served more than 1,000 meals in a single day. “We do whatever it takes to get it done,” he said. “Last week, I worked 110 hours.”

The demands on Ilias’s time will increase when he opens two more restaurants – Athenian Grill’s third location and a New York-style food hall – at The Summit, an upscale shopping center under construction at Nicholasville Road and Man O’War Boulevard.

“This is just the beginning. We’re always going to be loyal to Lexington. It’s the heart of our operation. But this will be a regional company, and it may go beyond that,” Ilias said.

Nothing will happen too quickly, however. Ilias won’t stray from the studied, deliberate, research-based approach that has worked so well for him.

“The restaurant is really a mirror of me as a person,” he continued. “It’s why we have fresh flowers on the table. Walk back into the kitchen, and everything’s organized. Everything is spotless. I spend 14 hours a day at this place. It’s more than I spend at my home, so it has to be run a certain way.”

Tell us about your family.
My parents live in Greece and frequently visit us. I got married last summer to Rebecca Cox. I have a brother in

Athens. He is married to Eva, and they have a beautiful daughter Chrisa. My aunt Louiza is here in Lexington.

What was the last thing you cooked for your family at home?
I love to grill, so I used my Green Egg and made grilled sea bass (bronzini).

What was your favorite food as a child?
Pastitsio, Greek lasagna, and it was the first item I put down as a menu item for the restaurants when I started designing the menu.

What kitchen tool can you not live without?
My grinder. I love to freshly grind spices.

How would you describe working in your kitchen?
Sometimes chaotic of course, but we try to be prepared and have everything in order.

Last restaurant in Lexington where you dined?
Loudon Square Buffet. Max is a great friend, and I love to stop by, have my lunch and chat with him.

If someone wanted to be a chef, what three things would you tell him or her?
You have to care for ingredients, be able to deal will stressful environments and be able physically to deal with the very, very long hours.

What does “hospitality” mean to you?
Down to earth, honest, friendly service.

When you’re not in the kitchen, what do you like to do?
I love to fish. I get out there as much as I can.

2.2 lbs ground beef (can be made with lamb also)

4 slices white bread without the crust

Remove the crust from the bread and soak it in milk. When soft, squeeze to drain the milk. In a food processor add one of the eggs together with the onions and garlic and process. Put the minced meat in a large bowl and add the grated onion as well as the bread, the mint and finely chopped parsley, the other egg, salt, pepper and spices. Mix very well. Leave the mixture in the refrigerator for about ½ an hour or more for the flavors to develop. Shape mixture into small round or oval balls. Dredge them in flour and fry them in hot olive oil on medium heat, until browned on all sides through the middle.