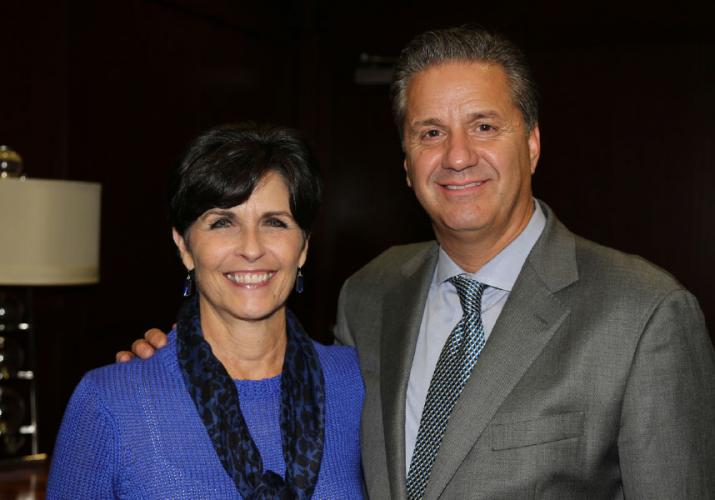 If you were tasked with providing a succinct job description for the position Head Coach, Men’s Basketball, University of Kentucky, your wording may read like this:

“To find and develop players. To win games. And to keep an energetic fan base…energized.”

That description would not be wrong. But neither would it be entirely right.

According to John Calipari, that is. And he should know.

Counting the 2016-2017 season, Coach Calipari has been on the job eight years. Needless to say, he is quite familiar with the great responsibility he has…

…to give back to others.

“The seat that I sit in, whether it’s me or another coach, really carries a lot of weight,” reflected Calipari in 2014, from his office chair inside of UK’s Joe Craft Center. “And I think the seat-holder owes it to this community and this state to give back. To get involved. To bring light to the great things that need support from others in our university, others in our state and our city.”

Since September 2012, a primary way Calipari has assisted people in Kentucky—and beyond—is through The Calipari Foundation (TCF), a public charity based in Lexington. The foundation’s mission is to provide for the physical, educational, leadership, and developmental needs of people and communities, while encouraging and equipping others to do the same.

Calipari and his wife, Ellen, created the foundation so that they would have a local, formalized vehicle through which they could focus their giving efforts. Prior to starting TCF, the Caliparis utilized a donor advised fund housed at the Community Foundation of Greater Memphis for much of their charitable work. Calipari initiated the donor advised fund when he was the men’s basketball head coach at the University of Memphis.

While coaching in Memphis, Calipari put up big numbers. But he’s put up even bigger ones in Lexington—in both basketball and philanthropy.

And numbers tell a story. The Calipari Foundation’s numeric tale is one wherein, by the end of this year, more than 50 nonprofit organizations will have received more than $2.5 million in grants.

A good story, right? Well, yes…but not quite good enough.

John Calipari tends not to be a complacent person. You may have heard that about him.

Consequently, Calipari has used “the seat he sits in” to generate funds to match nearly all of the dollars granted by the foundation, meaning the combined economic impact of TCF’s grants and matching gifts these past four years has been approximately $5 million.

Turns out that “spheres of influence” is not only TCF’s tag line, but also its operating approach.

“Coach is an incredible example of someone using his platform to encourage servant leadership,” said Manny Ohonme, co-founder and president of Samaritan’s Feet International, an organization whose mission is to create a world with zero shoeless children. “I’ve seen him consistently engage athletes in a lifestyle of giving and serving. He has personally modeled it, and now many of his players continue to serve others as they play professionally.”

Ohonme cites the 2014 trip UK men’s basketball took to the Bahamas as one of his favorite moments in the relationship between TCF and Samaritan’s Feet.

“When the team was there, Coach asked if we could set up some shoe distributions so that the team could serve together. I could see how important this was to Coach—he told his guys that they would know fame and fortune, and he wanted them to know what to do with those things when they had them. So, we had the players, their parents, and coaches all serving together in the Bahamas between tournament games.”

Serving, in this case, meant washing the feet of local children and fitting them for shoes.

“It was so beautiful to see Samaritan’s Feet used as an instructional platform to prepare and bond the team together,” Ohonme noted. “One special moment that I’ll never forget: We ran out of socks at one point, and Karl-Anthony Towns took off his own socks to give to a child who needed them.”

Along with the outreach in the Bahamas, Calipari and the foundation have supported Samaritan’s Feet in its nationwide Back to School events, along with specific efforts in Haiti and in eastern Kentucky.

TCF has been busy here in central Kentucky, too. One of the foundation’s important efforts has been supporting a local chapter of Team Focus, an organization founded by Mike Gottfried and his wife, Mickey. Team Focus provides role models and mentors for young men without a father figure in their lives, aiming to help them develop as leaders.

Gottfried first met Calipari at the University of Kansas in the early ‘80s. At the time, Gottfried was the Jayhawks head football coach and Calipari was an assistant basketball coach. Sort of.

“I love the story of John working the KU basketball camp right out of college,” said Gottfried. “He worked 18 hours a day. At the end of the camp, Head Coach Ted Owens was so impressed with John that he offered him a volunteer coaching job—he would be able to coach, but he would also have to serve the players three meals a day.

“So John served, and he worked his way up the coaching ladder.”

And even though the adjective preceding “Coach” in Calipari’s title has long since changed from “volunteer”, Gottfried remains impressed with Calipari’s heart to serve.

“A few years back on Father’s Day, John came out to our Team Focus camp and spent a good part of his day mentoring, teaching, and having fun with more than 40 young men from Kentucky without fathers,” said Gottfried. “He told them to ‘swim to the buoy’—if someone will mentor you, run and swim to him or her.”

“He is always willing to help, and even with his busy schedule, he’s just a phone call away,” he continued. “He is an excellent husband, father, coach, and friend. And he loves Kentucky.”

And Kentucky—the residents of the Commonwealth and those fans who live beyond its borders—love him back.

Which works out very well when people are in need.

“We have seen him use his influence by reaching out to the BBN (Big Blue Nation) to support disaster relief efforts,” Lynne Washbish, senior major gifts officer for the American Red Cross, said of Calipari. “When he asks, they respond.”

Calipari’s initial connection with the Bluegrass Area Chapter of the American Red Cross came via the aforementioned Hoops for Haiti telethon in 2010.

“It was very uplifting to watch Coach Calipari and his team in action, to see them interact with our donors,” stated Washbish. “There is nothing better than working a telethon and watching his team answer the phones.”

The most recent manifestations of TCF’s partnership with the Red Cross were this past August’s text-to-give campaign and the Coach Cal Celebrity Softball Classic, played at Whitaker Bank Park. These initiatives, combined with Red Cross matching gifts and funds contributed by a regional Papa John’s pizza promotion, generated more than $500,000 for flood relief in Louisiana.

“The Red Cross has appreciated Coach Calipari’s willingness to use his public forum for the public good,” added Washbish. “We think he belongs in the philanthropy hall of fame.”

The Calipari Foundation will simply continue doing what it has been doing since its inception. This includes initiating and participating in interesting, engaging activities to raise support for worthy causes.

In the past, the foundation has, among other things: hosted a comedy show; auctioned various autographed items from Calipari’s “closet,” including shoes he wore during UK games and surfboards; raffled two Harley-Davidson motorcycles (one to benefit Superstorm Sandy victims and the other to benefit the Trooper Project of the Kentucky State Police); and hosted the annual John Calipari Basketball Fantasy Experience, TCF’s most successful fundraising event, that has often included an alumni game featuring former UK men’s basketball players.

In the future? Expect not only more of the same but also more from the man who currently holds the “seat” of Head Coach, Men’s Basketball, University of Kentucky.

He’s completely fine with that. For he knows that Kentucky basketball fans tend not to be complacent persons, either.

The Calipari Foundation Inc. is 501(c)(3) nonprofit organization, as recognized by the Internal Revenue Service.
To donate to the foundation, please visit www.caliparifoundation.org/contribute.