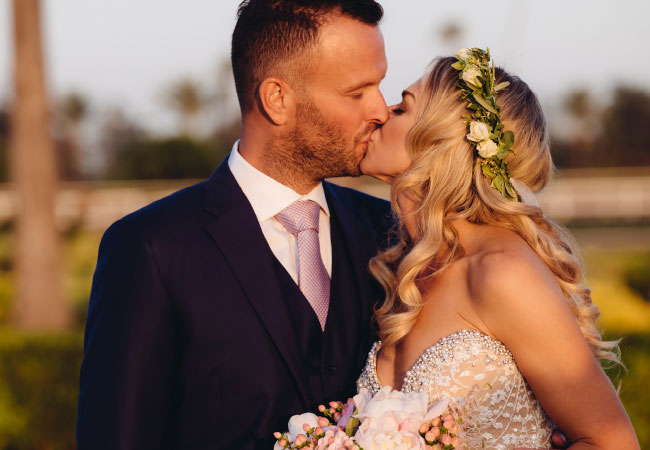 Laura was having coffee with her friend, Michelle Weisler, at the Four Seasons in Beverly Hills. Thom walked in for a meeting with Chris Matthews from Hardball when he spotted Michelle, who was also a friend of his. He walked up to the table to say hello just as Laura was sharing a risqué story. The next day, he emailed Michelle to ask about Laura. Knowing he was in the business of comedy, she replied with videos of Laura’s wacky comedy work, assuming he was interested in her professionally. Some communication mishaps and two months later, Laura’s agent connected her with Thom to discuss a television project. They shared funny videos for two weeks before meeting for lunch, which became bowling, arcade games, a couple beers and eventually, love. Now, Thom is Laura’s biggest project.

As a home-grown Lexington girl and an official Breeders’ Cup Ambassador, there was hardly any question that horses would make their way into Laura’s wedding day. The Breeders’ Cup is held every other year at Santa Anita Racetrack, and as a bonus, the course is about 10 minutes from the couple’s home. “It was built in the 1930’s and stays true to that style throughout. It also backs right up to the mountains and the one thing I wanted was to get married in front of the mountains,” Laura explained. It was the first wedding and reception at the Santa Anita infield!

Her stepfather built barn doors made from reclaimed Kentucky barn wood for the couple to stand in front of during their nuptials. A wooden plank walkway was created for the aisle, which was lined with lanterns. Her friend, music producer Jeremy Adelman, played the call to post before Laura rode into the ceremony in a horse and carriage with her father.

Awaiting the couple at the end of the aisle was a bourbon barrel with Angel’s Envy bourbon and silver goblets. After the opening prayer, Laura and Thom had an “opening pour”. In lieu of a unity candle, they poured mason jars filled with dirt from Keeneland and Thom’s sister’s backyard in New Jersey (where he grew up) into a pot, where they planted a small tree.

The cocktail party featured bluegrass music played by Gabe Witcher from Punch Brothers and Sean Watkins from Nickel Creek. Angel’s Envy made all the signature cocktails, served in mason jars that said “Drunk in Love”. One of the bridesmaids, Olivia Hunter Swan, is the owner of Olivia’s Beer Cheese in Lexington, which made the perfect Kentucky cocktail snack.

Six foot tall marquee letters stood between the entrances to the cocktail party and reception, lighting the way with “LOVE”. The bride and her bridesmaids switched to fun, shorter dresses. A betting booth served drinks to guests. Used horse shoes stood on every place setting at the tables, each one named after a stakes race. Guests found their tables in a custom racing program. Flowers were arranged in mint julep cups and racing trophies for clever horse racing touches that paid homage to Laura’s upbringing.  Shoshana Bean, recording artist and Laura’s fellow Hairspray original cast member, sang The Beatles’ “In My Life” with Laura’s songwriting partner, David Ryan Harris. The bride and her bridesmaids did a surprise flash mob where every member of the bridal party came out onto the dance floor and did a choreographed routine to a medley of songs meaningful to Thom.

As they mingled, guests could enjoy three cakes: the main cake that tasted like Derby Pie, a UK basketball cake and a Yankees cake for Thom. Laura and her stepfather stained wooden fence panels, which he assembled into an open-air barn structure. In a side lawn, furniture, a fire pit and an old Airstream trailer offered guests a place to relax from laughing and dancing the night away.