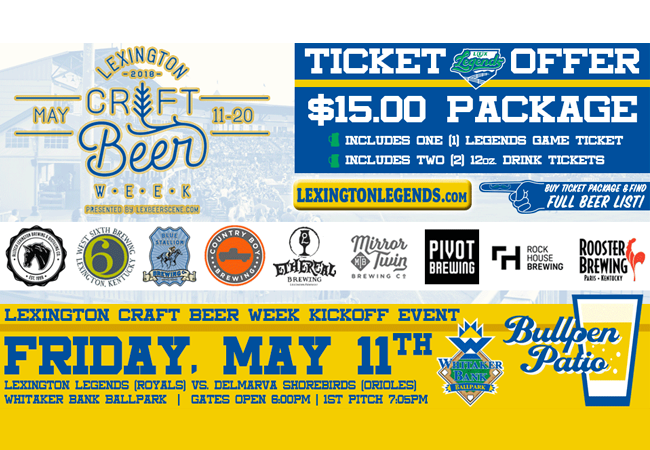 On Friday, May 11 at 6 p.m., fans will be able to take in a baseball game while tasting the flavors of local breweries. For $15, fans will get a ticket to the game as well as two beer vouchers. Breweries include Kentucky Ale, West Sixth, Blue Stallion, Country Boy, Ethereal, Mirror Twin, Pivot, Rock House and Rooster. Ticket packages can be ordered online at www.lexingtonlegends.com.

“We always look forward to being a part of Lexington Craft Beer Week. We invite all the brewery owners and brewers to the ballpark for this game as a way for them to relax before what I’m sure is a very busy week. It really gives our fans a chance to rub elbows with those that make Lexington’s best beers,” said Legends Ticket Manager, Kyle Hargrove.

The week, featuring special events, tappings and tastings at bars and breweries across the city is sponsored by Alltech Lexington Brewing and Distilling, Blue Stallion Brewing, Brewgrass Trail, Country Boy Brewery, Ethereal Brewing, HopCat and West Sixth Brewing. This year, there are over 25 different locations around Lexington that are hosting events.

This will be the sixth year Country Boy Brewing and West Sixth Brewing have come together to make a collaboration beer called Country Western.  12oz cans and draught will be released on May 11th at both Country Boy and West Sixth at 5p.m.  It will then be available on draught around town throughout the week at many special events for the releases.  This is a great year for local collaboration between the breweries as Blue Stallion and Ethereal also have teamed up to create a Cosmopolitan-inspired Pomegranate-Lime Gose, also to be released on May 11 at noon on draught.

There are plenty of things for foodies this year as well.  We have beer pairing dinners at OBC Kitchen w/Country Boy, Nick Ryan’s w/Alltech & Country Boy, Winchell’s w/West Sixth, Middle Fork Kitchen Bar w/Ethereal, and Hopcat w/Tennessee Brew Works.  We’ve also got Mother’s Day specials at Oscar Diggs, Bear and Butcher, Mr. Brews, Ethereal, and Blue Stallion.  Other events planned during the week include special beer releases at each of the breweries, special rare beer releases, events for Cider lovers, a homebrewer event with Nate’s Coffee at Rock House, a “Test Batch Takeover” at Blue Stallion where interesting and experimental recipes created by local homebrewers will be featured, a beer festival at Heritage Hall to cap off the week, a homemade beer cheese contest at Country Boy, and much more.