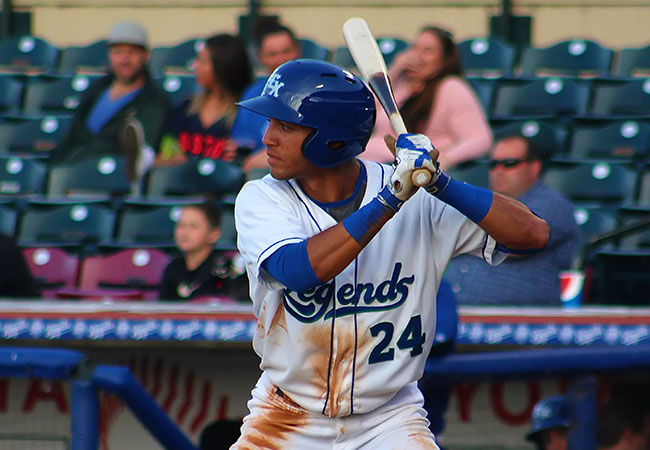 The Lexington Legends traveled to Columbia, South Carolina to face the Fireflies in the first of a three-game series. A five-run eighth inning, propelled the Legends over the Fireflies. Lexington’s record improves to 13-10 while Columbia’s drops to 12-13.

The Fireflies plated the first runs of the ballgame in the bottom of the second inning when Quinn Brodey reached on a leadoff double to right field. Ali Sanchez then doubled Brodey him home and the Fireflies led, 1-0. Giovanny Alfonzo then singled on a soft line drive to right field, allowing Sanchez to score. Hansel Moreno then drew a walk, advancing Alfonzo to second base. Edgardo Fermin singled on a weak groundball to left field, scoring Alfonzo and Columbia lead, 3-0.

The Legends had an answer in the top of the third inning. Brewer Hicklen reached on a leadoff walk then advanced to second on a single by Oliver Nunez. Travis Jones loaded the bases with a line drive to right field. With the bases loaded, Seuly Matias hit a groundball to the second baseman, Raphael Gladu, who committed an error while fielding it, allowing Hicklen and Nunez to score on the play. After the third, the Legends trailed 3-2.

The Fireflies also sprinkled in runs in the fourth and sixth innings. In the bottom of the fourth, Hansel Moreno singled on a bunt down the right field line. With Fermin at the plate, Moreno swiped second base. Fermin then singled on a soft liner to center field, and Moreno moved to third. Blake Tiberi popped a sacrifice fly to Lexington’s shortstop, Jeison Guzman, and Moreno scored.

In the top of the eighth, MJ Melendez lined a triple to centerfield. Sebastian Rivero doubled him home, and the Legends pulled within two runs. With Rivero at second, Marten Gasparini was then hit by a pitch, advancing to first base. Hicklen grounded into a force out at second base, but the Legends still had runners on the corners. Nunez drew a walk and loaded the bases. Jeison Guzman roped a bases clearing double down the left field line, and the Legends took a 6-5 lead. Jones scored Guzman with a single to the second baseman, Tiberi, and Lexington extended their lead, 7-5.

Garrett Davila tossed the first 4.0 innings for the Legends, allowing four runs on six hits while walking three and striking out three. Julio Pinto earned the win for Lexington, throwing 1.0 inning of perfect relief with two strikeouts. Stephen Villines was given the loss for Columbia, pitching 1.0 inning, allowing five runs on four hits while striking out two and walking one.