Women at Increased Risk for Stroke 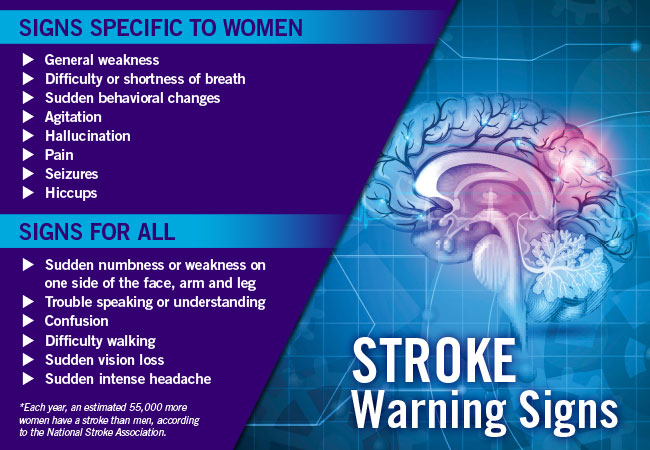 More than 55,000 more women have a stroke each year than men

May marks National Stroke Awareness Month, a time dedicated to reducing the incidence of stroke by helping raise awareness of the disease, which is the leading cause of serious, long-term disability in the United States. Each year, more than 800,000 people in the U.S. experience a stroke, and more than 133,000 Americans die from the disease. During this awareness month, KentuckyOne Health is encouraging community members to learn about risk factors of stroke, and how additional health issues, like depression, may increase a person’s risk.

“Stroke is the fourth leading cause of death in the U.S. Eighty percent of strokes are preventable,” said David Blake, MD, stroke program medical director and neurologist at Saint Joseph Hospital. “Knowing which populations are at risk for strokes, as well as common signs of the disease, can help save lives.”

Common warning signs and symptoms for both men and women experiencing a stroke often include confusion, trouble speaking or understanding, difficulty walking, sudden vision loss or a sudden intense headache, and sudden numbness or weakness on one side of the face, arm and leg. However, women may report additional symptoms including general weakness, difficulty or shortness of breath, sudden behavioral changes, agitation, hallucination, pain, seizures and hiccups.

Stroke risks in women can be exacerbated by the use of birth control and other hormonal therapies, being pregnant, or suffering from migraines. In addition, research has shown depression can also double a middle-aged woman’s stroke risk, according to the American Heart Association. The study found women who were depressed were 2.4 times more likely to have a stroke than women without depression.

“With women already being at a significantly higher risk for stroke than men, it’s important that they are aware of these risk factors and learn more about the warning signs that accompany a stroke,” said Dr. Blake. “When a person gets to the hospital quickly after the onset of stroke, there are different treatments available that can help save their life. It’s important to know the signs and symptoms, and when to take action.”

It’s important to pay attention to when stroke symptoms first surface. If administered within the first three hours of symptom onset, FDA-approved clot buster drugs have shown to reduce long-term disability in many stroke patients.

For more information on stroke, warning signs and risk factors, treatments, and finding a physician to talk to about the disease, visit www.kentuckyonehealth.org/stroke-care.

KentuckyOne Health, part of Catholic Health Initiatives, is one of the largest and most comprehensive health systems in the Commonwealth, and includes hospitals, physician groups, clinics, primary care centers, specialty institutes and home health agencies in Kentucky and southern Indiana. KentuckyOne Health is dedicated to bringing wellness, healing and hope to all, including the underserved.