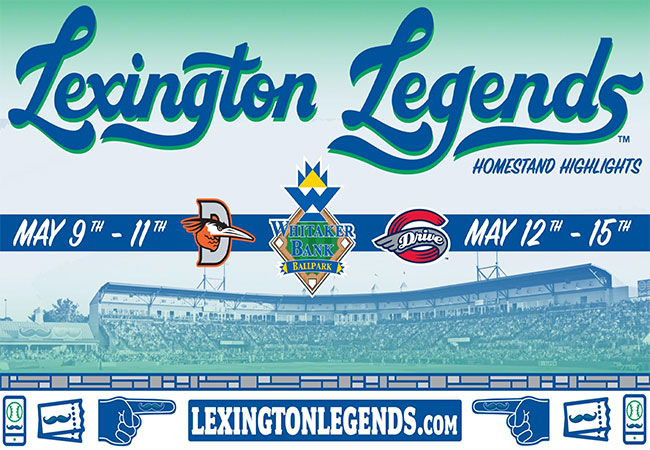 The Lexington Legends return to Whitaker Bank Ballpark after the longest road trip of the season thus far on May 9. The Legends will first face the Delmarva Shorebirds in a three-game series, then welcome in the Greenville Drive for four games. The home stand is packed full of promotional nights such as Millennial Night and Thirsty Thursday along with Whitaker Bank Ballpark playing host to the kickoff event for the Sixth Annual Lexington Craft Beer Week presented by VisitLex.

“The upcoming home stand is exciting because of the variety of events that fans can be involved in at Whitaker Bank Ballpark. Whether it is Yoga on the Field, the wide array of activities on Mother’s Day or Millennial Night, fans of all ages will have a blast at the ballpark,” said Legends President/CEO Andy Shea. “We are also thrilled to kick off Lexington Craft Beer Week on Friday when our gates open.”

#HumpDay, May 9 at 10:35 a.m. vs. Delmarva: The Lexington Legends will host their second Education Day of the season, welcoming in students from around the state of Kentucky. Education Days presented by Lexmark will include STEM related activities throughout the game as well has vendors in the Toyota Kids Zone with hands-on activities for the children. The goal of the Lexington Legends STEM (Science, Technology, Engineering & Mathematics) Program is to help children in Fayette County Public Schools gain the skills required to succeed in today's world. This program allows students to learn through hands-on experiences affiliated with the Legends baseball and Lexmark. The US Army will also be on site provided students with information and even more activities.

#ThirstyThursday, May 10 at 7:05 p.m. vs. Delmarva: Every Thursday, fans can bring their best friend of the K9 variety for Bark in the Park. Dog owners can bring their K9 friend to the ballpark for a $2 dog entry fee to be donated to the Scott County Humane Society. Fans of the adult variety can grab a drink during Thirsty Thursday presented by Kentucky Ale allowing fans to enjoy $1 12 oz. beers and $3 16 oz. beers at the Bullpen Patio, First Base Pavilion Tent, and the Handlebar in the first base concourse.

#FinallyFriday, May 11 at 7:05 p.m. vs. Delmarva: The Sixth Annual Lexington Craft Beer Week presented by VisitLex will kick off on May 11 when the Legends open their gates at 6 p.m. The Legends will have 18 beers on tap from nine breweries, most of which never have been poured at Whitaker Bank Ballpark. Lexington Craft Beer Week will run from May 11-18. Fans will be able to take in a baseball game while tasting the flavors of local breweries. For $15, fans will get a ticket to the game as well as two beer vouchers. Breweries include Kentucky Ale, West Sixth, Blue Stallion, Country Boy, Ethereal, Mirror Twin, Pivot, Rock House and Rooster. Ticket packages can be ordered online here. It will also be the first Friday Night Live of the season, with live music in the Stables on the third base side of the ballpark which will begin when gates open at 6 p.m. Any student that participated in the Legends’ Hit the Books Reading Program can redeem their bookmark for two free box seats at the Whitaker Bank Ballpark Box Office. This is the final opportunity to students to redeem their tickets.

#SunnySaturday, May 12 at 6:35 p.m. vs. Greenville: Fans can breathe deep on May 12 at 10 a.m. when the Lexington Legends host Yoga on the Field Presented by Bourbon on Rye. This complimentary community event is open to yogis of all ages and allows fans to do yoga on the same field as the Legends. Beginning at 10 a.m. Brooke Williams will lead a 60-minute Vinyasa Flow. Bend and zen alongside the Legends players and Big L in this practice designed for beginners to advanced yogis. Following yoga, fans can indulge in $2.00 post-yoga mimosas. Please use this link to RSVP for the event. Special thanks to our partner, Athleta, for helping to make this possible!

#SundayFunday, May 13 at 2:05 p.m. vs. Greenville: Fans with sensory sensitivities and their families will be able to enter the ballpark at 11:30 a.m. to take part in pre-game festivities they previously may have had to skip. There will be no loud music or public address announcements made during this time. Legends players will be available for autographs and the Toyota Triple Play Zone will be open, also. When gates open for the public at 12:30 p.m., children and their families can make their way to Guest Services to pick up one of the thirty Sensory Safety Kits provided by UK HealthCare for the remainder of their time at Whitaker Bank Ballpark. When the gates open for the public at 12:30 p.m. families can take the field and participate in Playtime in the Outfield. Fans of all ages will be able to take in a game of catch with Legends players before they take on the Drive. Concession stands will also be open for hungry fans to have a bite to eat and grab a moist Pepsi just in time for the game. It is also Free Ticket Sunday thanks to JiF, allowing kids 12 and under to receive a free box seat ticket. Throughout the ballgame, the Legends will have nine innings of prizes from both Kendra Scott and Burn Boot Camp for mothers. Mothers can win prizes ranging from necklaces and earrings to four larger, grand prizes from Kendra Scott as well as various items such as tank-tops from Burn Boot Camp. In order to be eligible to win, fans must register at the table near the front gates at Whitaker Bank Ballpark. On the plaza, On The Move Art Studio will be allowing children to take part in arts and crafts. Following the final out, kids will be able to run the bases.

#MillennialMonday, May 14 at 7:05 p.m. vs. Greenville: The Legends *can’t even* with Millennial Night on Monday, May 14. There will be #hashtags on #hashtags with plenty of opportunities to take #selfies throughout Whitaker Bank Ballpark. Every fan that enters the gates will receive a participation ribbon, and if the game goes too late, there will be a designated naptime between innings. What cures the Monday blues? Free parking at Whitaker Bank Ballpark! Fans will enjoy free parking for every Monday game presented by Members Heritage Credit Union.

#TuesdayVibes, May 15 at 7:05 p.m. vs. Greenville: The Legends invite fans to show off their heritage by wearing clothes that represent their roots. Fans that dress up will be able to get a free ticket to the next Tuesday home game on May 22 upon exit. Every Tuesday, fans can indulge in 100% all beef Eisenberg hot dogs for just a quarter all night long.

The Legends, a Class A affiliate of the Kansas City Royals and member of the South Atlantic League, play all home games at Whitaker Bank Ballpark  in Lexington, Kentucky. For ticket information, call (859) 422-7867.