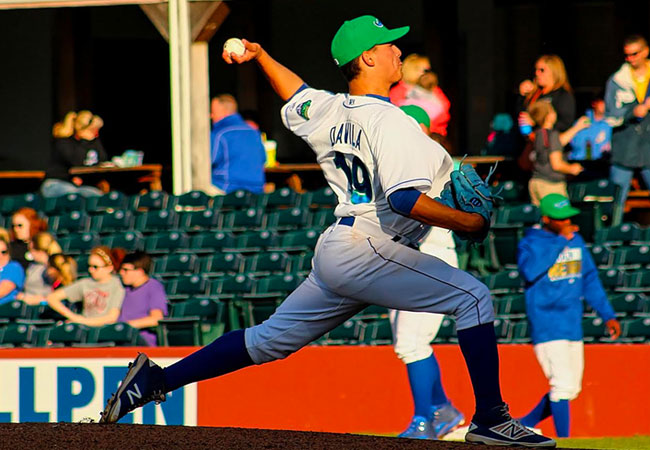 In the final game of the series, the Lexington Legends drop the series finale 3-2 facing the Charleston RiverDogs. The Legends record now drops to 14-15 and the RiverDogs improve to 16-15.

The Legends jumped out to an 1-0 lead in the fourth inning. MJ Melendez drew a one-out walk then scored when he was doubled home by Sebastian Rivero.

The RiverDogs knotted the game at one run in the bottom of the fifth with a leadoff home run by Jason Lopez.

In the bottom of the sixth, Wilkerman Garcia reached on a leadoff double to left field for Charleston. Dalton Blaser then singled him home on a line drive to left field, and the RiverDogs led, 2-1.

The Legends tied the ballgame up in the seventh. Rivero hit a groundball to the RiverDog’s shortshop, Garcia who bobbled it and Rivero reached on the error. With a runner on first, Brewer Hicklen laced a single to left field and Lexington and Charleston was tied again.

Despite having a runner in scoring position for the Legends in the top of the ninth, the RiverDogs walked if off in the bottom of the inning. After back-to-back singles by Dalton Blaser and Chris Hess, an RBI single by Molina plated Blaser and the RiverDogs took game four, 3-2.

Garrett Davila tossed 6.0 innings for the Legends allowing two runs on six hits while walking one and striking out two. Joshua Mitchell pitched 2.0 innings of hitless relief while striking out one. Tyler Zuber was given the loss after he pitched to the three batters in the ninth, allowing the game winning run on three hits. Greg Weissert earned the win for Charleston throwing 2.0 innings allowing one hits with three strikeouts.

The Legends have a scheduled off day tomorrow, May 8 and are back at Whitaker Bank Ballpark Wednesday, May 9 at 10:35 a.m. to take on the Delmarva Shorebirds. LHP Daniel Tillo (0-1, 3.68 ERA) will be on the bump for the Legends while the Shorebirds will send LHP Cameron Bishop (3-1, 1.74 ERA).

The Legends, a Class A affiliate of the Kansas City Royals and member of the South Atlantic League, play all home games at Whitaker Bank Ballpark  in Lexington, Kentucky. For ticket information, call (859) 422-7867.