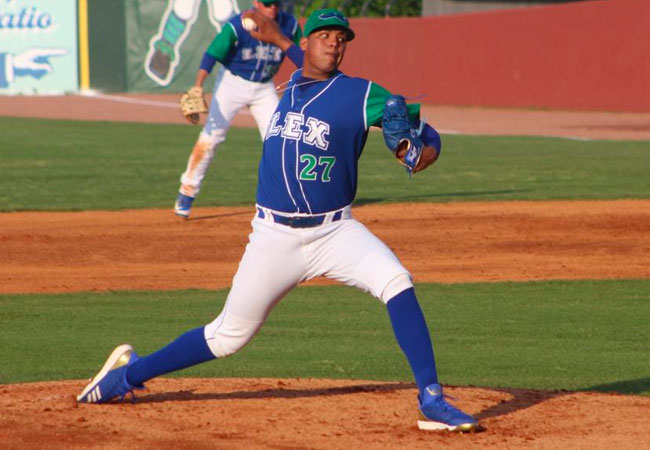 Led by an outstanding performance on the mound byCarlos Hernandez, the Lexington Legends shutout the Greenville Drive 6-0. The Legends record now improves to 16-17 overall, and the Drive drops to 9-26.

Carlos Hernandez pitched 5.0 masterful shutout innings allowing only one hit. He struck out nine batters and did not allow a free pass. Holden Capps continued the shutout in 3.0 innings of work, striking out three. Sal Biasi pitched the ninth, fanning two.

The Legends started their scoring spree in the first inning. Nick Pratto lined a two-out single to right field then scored on an RBI single to centerfield by Sebastian Rivero, and the Legends led 1-0.

In the second inning, Matt Morales led off with a single to centerfield. Cal Jones doubled him home, extending Lexington's lead to 2-0. Travis Jones lined an RBI single to right field, plating Jones, putting the Legends on top, 3-0.

Scoring continued for the Legends in the bottom of the third. Seuly Matias drew a leadoff walk then advanced to second when Sebastian Rivero was hit by a pitch. Morales then hit a fielder's choice to the third baseman, allowing Matias to score.

Leading 4-0 in the top of the fifth, Rivero blasted his third home run of the season over the left field wall, extending the Legends' lead to 5-0.

Matias scored the final run of the game in the seventh inning. He recorded his 11th home run of the season when he deposited a ball behind the wall in left-centerfield, putting the Legends ahead, 6-0.

Fans with sensory sensitivities and their families will be able to enter the ballpark at 11:30 a.m. to take part in pre-game festivities they previously may have had to skip. There will be no loud music or public address announcements made during this time. Legends players will be available for autographs and the Toyota Triple Play Zone will be open, also. When gates open for the public at 12:30 p.m., children and their families can make their way to Guest Services to pick up one of the thirty Sensory Safety Kits provided by UK HealthCare for the remainder of their time at Whitaker Bank Ballpark. When the gates open for the public at 12:30 p.m. families can take the field and participate in Playtime in the Outfield. Fans of all ages will be able to take in a game of catch with Legends players before they take on the Drive. Concession stands will also be open for hungry fans to have a bite to eat and grab a moist Pepsi just in time for the game. It is also Free Ticket Sunday thanks to JiF, allowing kids 12 and under to receive a free box seat ticket. Throughout the ballgame, the Legends will have nine innings of prizes from both Kendra Scott and Burn Boot Camp for mothers. Mothers can win prizes ranging from necklaces and earrings to four larger, grand prizes from Kendra Scott as well as various items such as tank-tops from Burn Boot Camp. In order to be eligible to win, fans must register at the table near the front gates at Whitaker Bank Ballpark. On the plaza, On The Move Art Studio will be allowing children to take part in arts and crafts. Following the final out, kids will be able to run the bases.

The Legends, a Class A affiliate of the Kansas City Royals and member of the South Atlantic League, play all home at Whitaker Bank Ballpark in Lexington, Kentucky. For ticket information, call 859-422-7867.