Melendez Grand Slam Not Enough As Legends Fall to RiverDogs 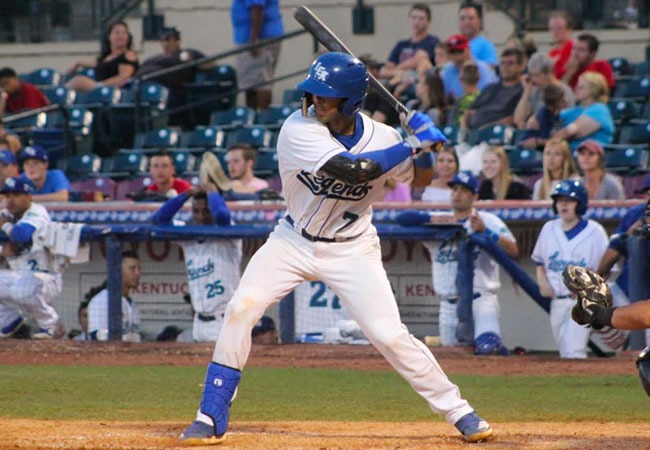 WHITAKER BANK BALLPARK (Lexington, KY) – After a shortened game last night, the Lexington Legends and Charleston RiverDogs played all nine innings, but the Legends fell 10-4. The RiverDogs now improve to 35-35 while Lexington drops to 37-33. MJ Melendez recorded the first grand slam of the season for Legends.

The RiverDogs got to scoring in the top of the first inning. Pablo Olivares and Oswaldo Cabrera both hit solo homers to put Charleston ahead, 2-0.

In the top of the second, Carlos Vidal drew a walk then advanced to third on a double off the right field wall by Matt McPhearson. With runners at second and third, Olivares blasted his second home run of the night, a three-run homer, to extend Charleston’s lead 5-0.

The RiverDogs would go on to plate three more runs in the third. Jason Lopez and Chris Hess reached on back-to-back singles. Chris Hess then reached on a force attempt, but Lexington’s first baseman Nick Pratto committed a throwing error allowing Lopez to score and Hess to advance to third. McPhearson doubled home Hess and then Olivares followed it up with an RBI single to bring home Vidal. The RiverDogs led 8-0 after the third.

The Legends cut into that lead in the bottom of the fourth inning. Brewer Hicklen and Pratto reached on singles then Dennicer Carrasco loaded the bases when Charleston committed a fielding error. With the bases juiced, MJ Melendez smashed a grand slam, the first of the season, to cut Charleston’s lead in half.

Charleston would hit two more home runs before the night was done. Hess led off the fifth with a homer and Leonardo Molina lined a home run in the sixth to extend the RiverDogs’ lead, 10-4.

The Legends and RiverDogs meet for the series finale tomorrow, June 23 at 6:35 p.m. We will honor all First Responders, including police officers, firefighters, EMS, correctional officers, deputy jailers and dispatchers on First Responders Night presented by Woodmen Life. First Responders can purchase discounted tickets, based on availability, by clicking this link. Before the Legends take the field, fans can take in the annual Guns vs. Hoses game, featuring the Lexington Police Department and Lexington Fire Department. The winner will receive the first place trophy, and the loser will receive the consolation prize of a toilet seat. Gates will open at 1:00 p.m. and the game begins at 2:00 p.m. Fans can enter with a Legends ticket for the game. Go Red for Women is a national movement to end heart disease and stroke in women sponsored nationally by Macy’s and CVS, and locally by KentuckyOne Health and Passport Health Plan. KentuckyOne Health, Passport Health Plan, the American Heart Association have annually teamed up with the Legends for “Go Red Night”, 2018 being our 9th season hosting “Go Red Night”. Employees, families, community members and Legends fans are encouraged to wear red and support women’s heart health. Be sure to stick around for postgame fireworks! It will also be the second night of KwizFun! Fans can answer questions all night long with a stadium-wide trivia game on the app during the fourth and sixth innings. Winners will receive prizes from the Legends and KwizFun!