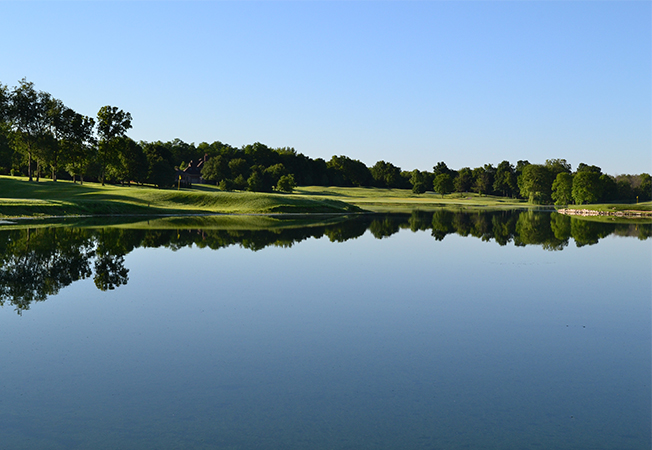 NICHOLASVILLE, KY (July 22, 2019) – Jim Herman’s wife and kids watch a lot of golf on TV, so they’ve seen it countless times where, after the final putt drops, the winner’s family runs out onto the 18th green to celebrate with hugs and kisses and tears.

The Herman clan got to experience that moment of exhilaration for themselves Sunday evening when Jim won the $3.5 million Barbasol Championship for his second PGA TOUR victory.

“It was pretty amazing,” Herman said.

He had no idea that his wife Carolyn and their kids, Abigail and Andy, were making the trip to Champions at Keene Trace for the final round.

They were staying in Philadelphia with Carolyn’s parents this summer, but when Jim held a one-shot lead going into Sunday, they decided to hop in a car and make the 10-hour drive to Lexington.

“They left (Philadelphia) at 4 a.m. They were confident in what I was doing,” Herman said.

When they got to the golf course, they found him waiting around during the three-hour rain delay.

“It was a total shock to see them,” Herman said. “I didn’t want to waste the opportunity.”

Herman and Kelly Kraft were locked in a close battle all afternoon. Herman lost his one-shot lead with a bogey at the 9th hole, and Kraft went up by one with a birdie at the 14th.

Kraft maintained that lead until the 16th, when he failed to get up and down out of a bunker on the par-3 16th.

Herman went back in front when Kraft had a three-putt bogey at the 17th.

Herman, a 41-year-old Cincinnati native, secured his victory with a solid par on the final hole, then celebrated with his family.

“It’s great to win here so close to home,” he said. “When I won at Houston, not many people were around.

“Here I got surprised by my brother, who came down yesterday. I had uncles, aunts and cousins out there supporting me and cheering me on.”

He also had somebody in the White House rooting for him.

President Trump called Herman Friday night to congratulate him on his play the first two rounds.

That was a follow-up from when they played golf together a few weeks ago at Trump’s Bedminster course in New Jersey, where Herman once worked as an assistant pro.

During that round of golf, Trump told Herman he should try a new putting style.

Herman, who had missed 16 of 19 cuts this season coming into the Barbasol, took the president’s advice and went to a conventional grip and standard putter.

By winning the Barbasol, Herman pocketed $635,000, but more important, he earned a two-year exemption on the PGA TOUR.

That’s an invaluable perk for a guy who had to take some time on medical leave the last couple years and had serious doubts about his career.

“My future on TOUR was not looking too bright,” he said.  “There was a lot of self-talk: what’s next for Jim Herman, professional golfer?”

He wasn’t sure how many exemptions he could get with his past-champion status, and figured he might have to go back to the Korn Ferry Tour and try to get his card back.

For complete information on the Barbasol Championship please visit:www.barbasolchampionship.com