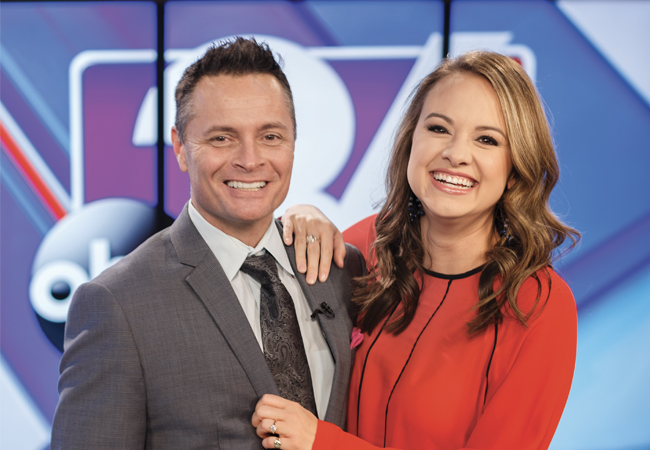 They’re baaaack! “The Lee and Hayley Show” returns to television this month at a new time and new station, weekdays at 4 p.m. on ABC36 (WTVQ).

Hosts Lee Cruse and Hayley Harmon now have a full hour for the banter, the chemistry, the fun and frivolity viewers came to know and love on the old show that ran on WLEX. In 2020, expect to see more sketches, standup comedy, guests and interviews, road trips, meet ‘n greets at area restaurants and businesses, reports on community activities, talking back-andforth on current event topics, fun with Photoshop and overall entertainment.

“Lee and Hayley” is the name of the show and the name of the business owned by Cruse and Harmon, with their other business partner Sarah Fisher, who is also chief revenue officer of the Lee and Hayley company. As for their own titles, Cruse is fine with “Viceroy,” while Harmon suggested “Sultan?”

They’ve hired their own staff, including photographers, editors and producers. “Our CFO was the former CFO at Channel 18,” Cruse said, “so she brings a lot of the discipline and knowledge necessary to manage the business, because we’re a couple of clowns.”

“We have neither of those, discipline or knowledge,” Harmon joked.

The formula of television hosts (Oprah) owning a show (Ellen) is not that uncommon (Dr. Phil) in Hollywood, but it is unique on a local level. As owners of the show, Lee Cruse and Hayley Harmon control the content and they own the rights to syndicate the show. Because WTVQ in Lexington is owned  by Savannah-based Morris Multimedia, the other Morris affiliates in Georgia, Mississippi, North Carolina and Tennessee will be a good place to start with syndication offers.

ABC36 has provided a green room and office suite for the new Lee and Hayley company. “The folks at ABC36 are being very generous to us. They’re excited and we’re excited,” Cruse said.

He has a background in standup comedy and in radio as a morning show personality and afternoon talk-show host, and in television as a news anchor and feature reporter. Born in Memphis, Harmon grew up in Lebanon, Tennessee, about 30 miles east of Nashville. Cruse is from Winchester, Kentucky, about 30 minutes east of Lexington. Harmon majored in Electronic Media Journalism at Middle Tennessee State University, where she took courses on reporting, investigating and researching, mass media law, and played intramural soccer. After graduating in 2010, she was a reporter for the ABC television station in Bowling Green and then anchored the morning and noon news there. Two years later she was in Knoxville as a news anchor, and then moved to Lexington in 2014.

“I came to be the morning anchor and you’d been there for 48 years,” Harmon joked to Cruse. “Didn’t care for her at all. Didn’t like her one bit,” he fired back. He had been there for 17 years at that point.

They kid like this incessantly. Watching the two of them on-air and offcamera, either one, is an exercise in communication ping pong, a game of satirical, lyrical one-upmanship. “We play-fight all the time,” Harmon said. “I tell people all the time we’re cursed. Our chemistry is our cross to bear.”

When they are out and about and someone says “Hey, Lee!” her brain hears it as “Hayley!” so don’t be surprised if she is the one to respond before he does.

“She’s amazing,” Cruse said. “There’s nobody out there like her with that rapier wit. She challenges me all the time.”

In the previous decade, Harmon was in the studio as a news anchor while Cruse was on the streets of the Bluegrass as a roving reporter, of sorts, checking in on local businesses and activities. They had desks across from each other in the bullpen, aka newsroom, and were friendly enough, until one busy morning when Cruse was typing away and he heard her say, “That was lucky. We almost lost a $400 hand cart.”

He spun around and his jaw dropped. “How is this girl familiar with that line from the film Blazing Saddles?”

Their fate as simpatico partners was sealed in that moment. Soon, Cruse pitched an idea to the general manager for a show featuring Hayley Harmon and Lee Cruse. Management agreed, and “The Lee and Hayley Show” debuted in July of 2017.

“We were both a little nervous that it might not work,” Harmon said. “It turns out—” “—it didn’t,” Cruse finished. We will get to that.

But it did work for almost two years. “We’re just hanging out, and I think that’s why viewers really connected to us,” Harmon said. “ they feel like they know you. They get to see our personalities and who we really are.”

So, the week a er Derby 2019 there was a headline about a BBC disc jockey getting red for making fun of the royal family. Picturing ‘obsession with the royals’ in his mind instead of actual people, Cruse’s on-air comment was “ is is my new favorite Dj.” He hadn’t seen the photo or read the story. “I’m thinking this is a Monty Python sketch, I don’t know what he’s done, I’m confused, I don’t know who we’re talking about anyway,” he said. After the show, he looked it up and knew he was NOT a fan of that disc jockey, and apologized on the air. He was suspended and on May 22 was fired by E.W. Scripps, corporate owner of WLEX. “No one asked me what happened,” Cruse said. “Nobody asked Hayley what happened. Nobody asked our producer what happened.”

The day he was fired, Cruse called Harmon and said, “We’re not done.” And then he got

busy figuring something out.

Harmon’s rule, personally and professionally, has always been to dig deeper before forming opinions. “I try not to make a decision until I know all details.  That’s my journalism background. That’s called doing your research,” she said. “ The issue with our culture now is jumping to a conclusion because we see a headline. I always click on it and read the full story. I watch the video. It’s a lesson to us all.”

“The people of Kentucky knew what happened and that’s why we have momentum like a dry rocket booster, ready to launch this show into the stratosphere,” Cruse said. “It was the best thing that ever happened. So thank you, Scripps.”

Harmon soloed the show on Channel 18 until Aug. 16. Six months later, Feb. 17, 2020, she makes her new debut with her old partner on “ e Lee and Hayley Show” on ABC36. The two are eager to bring their brand of entertainment and camaraderie back to the airwaves for Central Kentuckians.

“When we’re shooting segments and funny stuff happens, I’m always just trying to make you laugh,” Harmon said to Cruse. “And if you laugh, then I feel like everyone else will think it’s funny.”