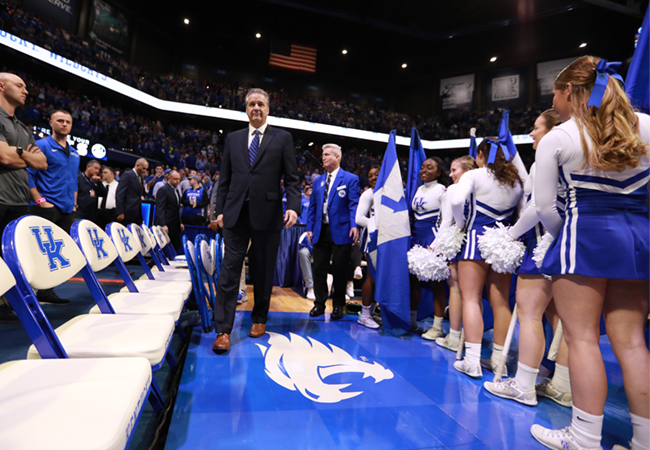 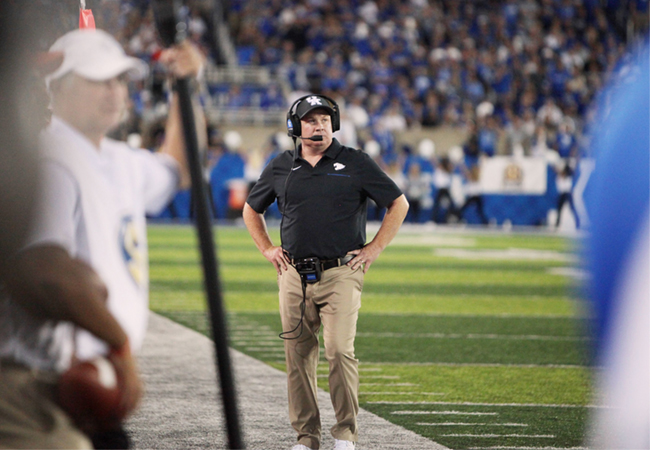 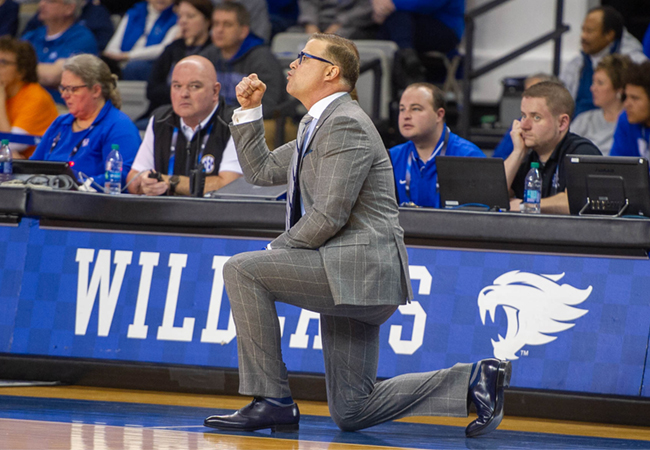 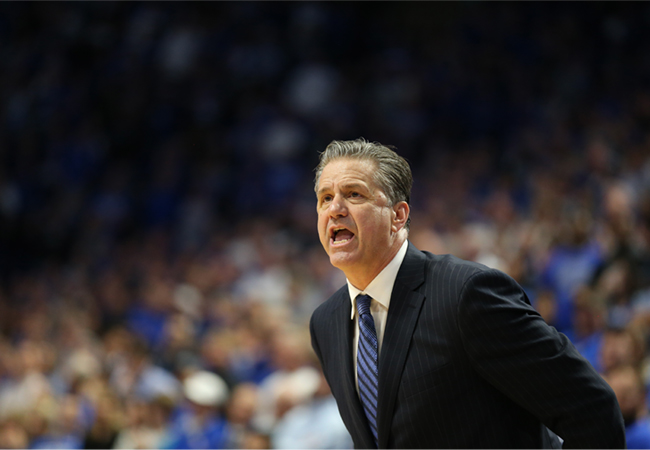 John Calipari, during a timeout, seated among his players like a great Buddha, ready to dispense the wisdom it would take to lock down another victory for the Wildcats…

Matthew Mitchell, surrounded by his charges on the Memorial Coliseum sideline; they await instruction and encouragement…

Mark Stoops, standing amid dozens of helmeted warriors who are ready to charge out of the locker room with his words ringing in their ears, eager to do battle on fields throughout the SEC…

Mitch Barnhart, seated at a conference table, owning the eyes and ears of a staff that is the spine of an athletic department funded by a budget north of $100 million…

They’re leaders – each successful in his own right, each for different reasons.  They coach, they push, they prod, they challenge.  But it might surprise you to know that one of the most effective leadership techniques they employ doesn’t necessarily include words of insight, delivered with gusto on the waves of thunderous tones.

In fact, at the most vital of times, they might not be speaking at all.

Read those words again.  They come from Lynn Bowden, himself a leader as the man who quarterbacked Kentucky to a most unlikely victory in the Belk Bowl this season.  He was talking about Stoops, about what makes his redheaded spitfire of a coach successful, although he may as well have been talking about any of them.  When it came time to answer the question, Bowden didn’t reach back to recall a wall-rattling, paint-peeling speech or a canned philosophical mantra some coaches like to trot out when it’s time to rally the troops.

No, says Bowden.  Stoops is willing to make certain the conversation runs in both directions. “He gives us a voice, even if some things he doesn’t like,” he says. “He lets us talk. At least, he listens.” Although, naturally, Stoops and his players realize who has the ultimate responsibility. “At the end of the day,” Bowden says, “he has the final word.”

“He gives us a voice, even if some things he doesn’t like. He lets us talk. At least, he listens. At the end of the day,” Bowden says, “he has the final word.”

Such is the case with Barnhart when it comes to UK Athletics. But he also knows that if he leads by example, others will follow. That was never more apparent on a rainy night in March, 2017, at Cliff Hagan Stadium in Lexington.  It was the night of a NCAA regional tournament baseball game between the Wildcats and North Carolina State.  A violent thunderstorm had chased the 5,005 fans from their seats to whatever shelter they could muster only now, the skies had cleared and the umpires had said, “Play ball,” in a ballpark with a grandstand that was soaking wet.

“Mitch Barnhart looks at the stadium and says, ‘We need towels.’” Nick Mingione, then Kentucky’s rookie head coach, remembers what happened next.

“They went and grabbed a bunch of towels. Mitch Barnhart was the first one to start drying off the seats,” Mingione says. “So you know what everyone else started doing.  To me, that’s just a beautiful example of what a servant heart looks like.”

And according to Mingione, Barnhart leads by guiding his people to the realization that before you reach out, you have to look inward.

Matthew Mitchell and his wife Jenna got a clear, strong signal from their collective servant heart when they decided to do more than just urge people to be good stewards of their community. They literally put their money – a lot of it – where their mouth is, giving toward construction of the new Town Branch Park in downtown Lexington.

“Jenna and I feel extremely blessed to call Lexington home,” Mitchell said on the day of the announcement, back in October. “We’ve received so much love and support from virtually every segment of the community and this is an opportunity for us to give back in a meaningful way.”

It’s not the first time the coach and his wife have shared their good fortune. In 2014, the Mitchells donated $1 million to the UK Athletics department. “We’re all one family,” Mitchell said at the time. “I have complete confidence in the leadership and I told Mr. Barnhart to use it where it’s needed most.”

Athletic teams that like to end shared experiences by huddling and putting all hands in; they break by counting down to a specific word and so often, it is “family.” Teams and coaches share so much more than words; it’s the experiences, both good and bad, that build bonds.  Lynn Bowden says, that’s where leadership from Mark Stoops is so strong.

“He’s building a brotherhood and making everybody feel the family,” says Bowden, “and making sure everybody knows that outside of football, we have him. If we need him, we can go to him.”

“He’s building a brotherhood and making everybody feel the family,” says Bowden, “and making sure everybody knows that outside of football, we have him. If we need him, we can go to him.”

The best coaches, the ones who have built the strongest bonds of trust with their players, are always there when needed.

John Calipari tries to make his players, past and present, understand that by telling them, they have a “scholarship for life,” meaning, those who choose to pursue the riches of professional basketball before they graduate can always return to the University of Kentucky and pursue their degree.  Among those who have taken him up on that is John Wall, whose contract with the NBA’s Washington Wizards is worth a cool $170 million.

Of course, not all of his players have signed such a fat contract, although many have gone on to huge paydays in pro ball.  Still, while he makes no secret that he’s all about helping aspiring professionals realize their dreams, Calipari sees his primary role as one of servant leadership – the same lesson he imparts to his players.  And he said as much on the day he was introduced to the Wildcat faithful, back in 2009.

“Our role is to serve the players, inspire them to reach higher than they thought possible,” he said in a news conference broadcast nationally on TV and radio, “to build exceptional men.”

“This is about integrity,” he said. “Pure integrity. Our mission is to prepare our young people for the rest of their lives.”

He’s accomplished that and not just with words. His first team, including Wall, Demarcus Cousins, Patrick Patterson and others, joined Calipari at the WKYT-TV studios in December, 2009, after Hurricane Harvey ravaged Haiti.  Calipari worked with station personnel to quickly put together a telethon that raised more than $1 million.  Six months later, he flew to the island, which had since been devastated by a 7.0 earthquake, to work with the American Red Cross, distributing shoes to needy children on the island.

Taking a cue from his coach, Wall has been active with charity work in the D.C. area, donating $400,000 to agencies that support homeless children.  Cousins worked with VSP Global to provide free eye exams for people in need in Sacramento.  And for years, he has quietly supplied backpacks and school supplies for underprivileged kids in his hometown of Birmingham.  In 2018, he was nominated for the Seasonlong NBA Cares Community Assist Award.

When it comes to building a team – a “family” – unselfishness is the strongest undercurrent in Calipari’s brand of leadership.  He explained his principles in a speech to Franciscan University of Steubenville, Ohio, in 2013.  He invoked the oft-told story of his 2012 NCAA championship team, led by freshmen Anthony Davis and Michael Kidd-Gilchrist, who a few weeks later would be chosen 1-2 in the NBA Draft.

Other coaches, both past and present, publically marvel at the job Calipari does each season, teaching players to check their egos at the locker room door, tuning out the posse members who may be along for the ride to riches.  He knows he has to lead them past all that, but they must realize it on their own.

Calipari would probably appreciate a nugget of wisdom posted recently on social media by a former Kentucky football coach.  Bill Curry enjoys sharing thoughts of coaches, orators and authors when the subject is leadership.  After all, he DID play for Vince Lombardi, one of the most renowned leaders in the history of football. So Curry knows a good line when he encounters it.

One of his recent favorites came from author John McQuiston II: “The true leader should never value self above an attitude of care and compassion for others.”

That would work anywhere – in a conference room, a sideline or a huddle.